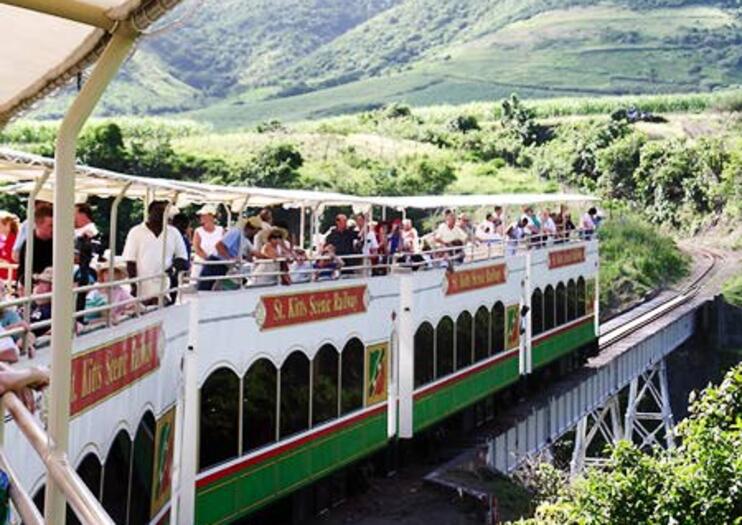 Originally built to transport sugar cane, the St. Kitts Scenic Railway is a unique way to explore a Caribbean island. The train winds along the island’s coastline, past cane fields and abandoned plantations, providing visitors with panoramic views along the way.
The Basics
Completed in the 1920s, St. Kitts Scenic Railway is known as the "last railway in the West Indies." The narrow-gauge track was laid so that large quantities of raw sugar cane could be transported from the fields to a processing factory near Basseterre (the island’s capital). This modern innovation allowed sugar production to continue on St. Kitts for much longer than on neighboring islands—the last crop was processed as recently as 2005.
Now, instead, visitors to St. Kitts can take their seats on the sugar train to explore the island’s scenery. The double-decker train cars were specially built for the railway. On the upper deck the carriage is open-sided for uninterrupted views, while on the lower deck there’s an air-conditioned carpeted "parlor" carriage equipped with comfortable rattan chairs where visitors can enjoy complimentary cocktails and a narrated live audio tour.
Things to Know Before You Go
How to Get There
The Sugar Train departs from a special dedicated station near St. Kitt’s capital city, Basseterre. Pre-booked tours include round-trip transfers to and from the station. Visitors must book a tour in advance to ride the train.
When to Get There
The train only operates when there is sufficient demand from visitors. Call ahead to arrange tickets.
Visit Romney Manor
For a closer look at the 350-year history of sugar production on St. Kitts, make a visit to Romney Manor near Basseterre, a sugar plantation that was once the home of Thomas Jefferson’s great-great-great-grandfather. In the 1830s, the plantation’s then-owner, the Earl of Romney, was the first man on the island to set his enslaved workers free. Since the 1970s, the estate has had a new focus—producing some of the most sought-after batik fabrics in the Caribbean.
Address: Port Zante, St Kitts, St Kitts and Nevis
Admission: Varies
Read MoreShow Less

45
Climb aboard a luxurious rail car for a train ride through Saint Kitts, offering the first scenic railway in the Caribbean. Journey 30 miles (48km) onboard your opulent rail car, outfitted with an observation deck, complimentary drinks, air conditioning, and large windows to guarantee prime views. As you travel, listen to a fascinating historical overview of the Caribbean before finishing with a sightseeing coach tour covering 12 miles (19km) of the island’s key attractions and landmarks. Your train ride also includes round-trip hotel transport (selected hotels only).
...  More
From
US$128.00
From
US$128.00
Learn More