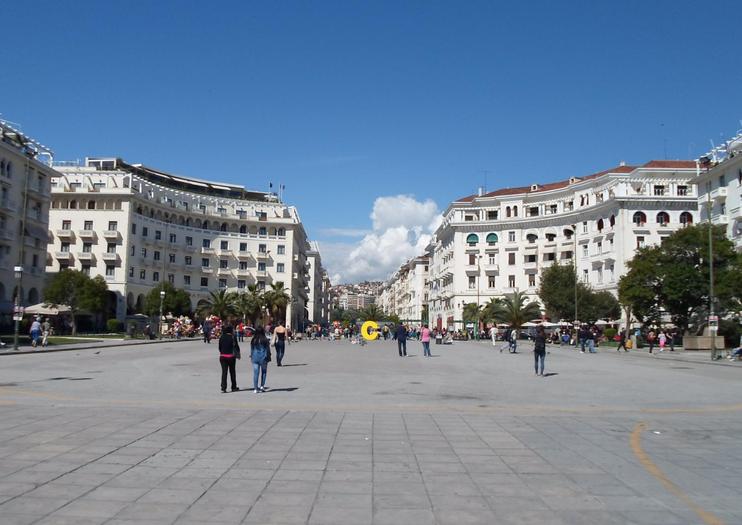 The hub of civic activity in Thessaloniki is Aristotelous Square, which was designed by French architect Ernest Hébrard in 1918 after the devastating fire of 1917 that destroyed much of the city center. Sitting on the waterfront just off Nikis Avenue, the square was designed to mimic the vast and grandiose open plazas found in many European maritime cities – such as the Praca do Comercio in Lisbon – and to move away from the chaotic layout of Ottoman Thessaloniki towards an ordered town development plan. Today most of the monumental mansions that line the piazza were rebuilt in the 1950s and renovated again in the early 21st century. It is one of the biggest and most impressive squares in Greece, offering a view of Thermaikos Gulf to the southwest and up the grand boulevard of Aristotelous to the gardens of Platia Dikastirion.
Thessaloniki is northern Greece’s party town and New Year sees crowds spilling into Aristotelous Square for the countdown to midnight before they pile into late-night clubs and bars to celebrate until sunrise. The square is also a popular spot for social events and festivals throughout the year; during the recent unrest concerning Greece’s financial position within the EU, many protests and political rallies also took place here.

1
Get the most out of your time in Greece by visiting Dion and Mount Olympus in one day. Save time organizing transport by having roundtrip transfers from Thessaloniki included. You’ll enjoy a comprehensive itinerary including stops at Dion (the religious site of ancient Macedonians), the traditional village of Litochoro, the valley of Enipeas, and you’ll also get great views of Mount Olympus.
...  More
From
US$101.97
From
US$101.97
Learn More

4
Get way off the tourist track on this insider’s food crawl through Thessaloniki. Discover where locals shop as you sample a selection of traditional Greek delicacies in Kapani and Modiano markets, packed with fresh cheese, organic produce, and tasty pastry stalls. Tours also include stops in Louloudadika and lively Athonos Square, plus a complimentary coffee to get you started.
...  More
From
US$33.99
From
US$33.99
Learn More

5
Discover Thessaloniki without joining a crowded sightseeing bus or spending up large on guidebooks with this morning walking tour. Roam around the central city in a small and easygoing group and stop by a range of historical and cultural highlights. Visit the monuments to Emperor Galerius, from his palace to his mausoleum, and stroll around ancient city markets like the Kapani Ottoman market and the Modiano Jewish market.
...  More
From
US$34.86
From
US$34.86
Learn More
Reserve Now & Pay Later
We'll reserve your spot today, and you can cancel up to two days* before your experience without making a payment. Secure your spot with ease, stay flexible, and never miss out.
How it works
Find your experience
Choose the experience you want knowing you can secure your spot without being locked in.
Make a reservation
Reserve now and pay later to secure your spot, commitment-free.
Choose when to pay
Come back to pay once your plans are set, or let auto-pay kick in two days* before your experience.
Enjoy your experience
Now you're all set! Have a great time.
Frequently Asked Questions  | Terms & Conditions
*Up to 9 days depending on the booking/product
Reserve Now & Pay Later
Secure your must-do activities without being locked in
Learn More

3
Visit remote beaches, traditional villages, and uninhabited islands on a full-day cruise to the Halkidiki Blue Lagoon. It's a great way to escape the crowds and explore parts of Greece only reachable by boat. Stop to swim and snorkel among pristine beaches and crystal clear water, and get a dose of Greek hospitality onboard the ship with live music and a freshly prepared lunch.
...  More
From
US$108.76
From
US$108.76
Learn More

4
The highlight tour lets you see the most amazing sights of Thessaloniki by bike. Explore traditional Greek markets and marvel at the White Tower situated on the beautiful boulevard. Discover the secrets of the city and the ancient Roman history. All provided by a local guide.
...  More
From
US$34.86
From
US$34.86
Learn More

3
During the ‘Culinary walking tour’ you will be using all your senses to get to know the Greek kitchen. Your enthusiastic tour leader can not wait to let you taste all the good stuff and tell you everything about the local habits. We walk through the city center and visit local shops, either immemorial or modern and a bit more luxurious. We introduce you to the proud owners of the family businesses and of course we’ll be visiting the central market!
...  More
From
US$63.92
From
US$63.92
Learn More

From ancient architecture to award-winning archaeological museums, the most recommended attractions in Thessaloniki tend to be daytime activities. Get a more fulsome picture of Greece’s hippest city during this nighttime city tour; from traditional Greek tavernas to live music and a floating bar, this tour offers the chance to hit the town like a local rather than spending the night glued to your hotel TV.
...  More
From
US$100.83
From
US$100.83
Learn More

3
On our slightly different city tour from the old town to the city center past beautiful UNESCO monuments and Byzantine churches, we also visit Greek markets, local shops, try four or five (depending on the day of the week and the day) Greek specialties (small snacks) and learn "real" Know Greeks who can tell us about their life in Thessaloniki! Our route also takes us through the quaint streets of Thessaloniki and we learn a lot about the history and culture of the city. On request, the day trip can be combined with a lunch or dinner in an authentic tip-tavern with Greek specialties.
...  More
From
US$55.51
Price varies by group size
From
US$55.51
Price varies by group size
Learn More

An interactive city discovery experience across Thessaloniki. You’ll solve riddles via a web app in your phone’s browser. All the information you need for your adventure is in your email from Secret City Trails. This is a self-guided tour, we do not meet you at the start location and you can enjoy your discoveries at your own pace. Solve 6 riddles. Each riddle takes you from one (hidden) location to the next. You’ll unlock local recommendations and fun facts - as well as the history of the city. You discover spots in Thessaloniki that most locals don’t even know. You see popular sights from a different angle (literally!). This game is suitable for friends, couples, families with kids and team buildings. Enjoy being together while exploring a city, be creative and use your imagination to find city’s secrets! You’ll feel like Indiana Jones - a true adventurer - as you explore the best of Thessaloniki. What are you waiting for?
...  More
From
US$13.60
per group
From
US$13.60
per group
Learn More

2
Our Ride & Bite bike tour Thessaloniki is the best tour for the real foodies amongst us. In three hours we cycle around several market places and through Ladadika neighbourhood. We will visit the best local culinary shops and stop regularly to try local delicacies and small dishes. Our Ride & Bite bike tour Thessaloniki is a relaxed and tasteful bike tour that teaches you everything there is to know about Greek table manners and eating traditions. Our English-speaking, local tour leaders provide for the insight into Greek cuisine, telling you about their own experiences and cooking habits.
...  More
From
US$63.92
From
US$63.92
Learn More

Things to do near Thessaloniki