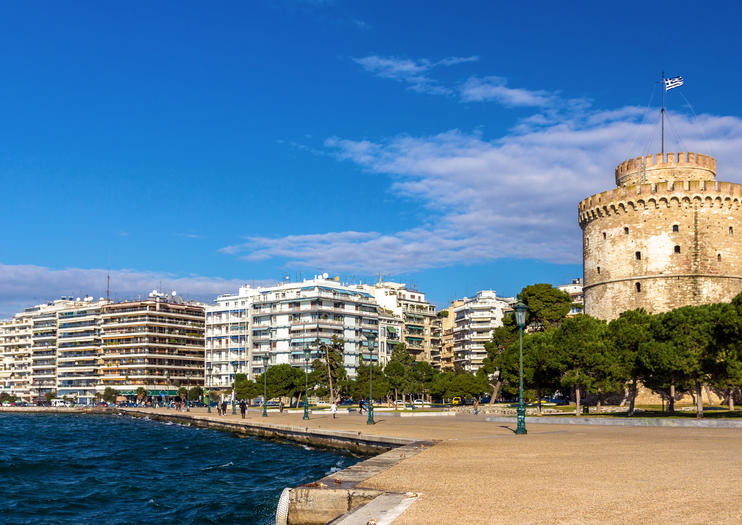 The White Tower (Lefkós Pýrgos) is one of the best-loved buildings in Thessaloniki, a dumpy cylinder topped with turrets that sits at the southern end of the seafront promenade of Nikis Avenue. Thought to have been built on the top of Byzantine remains during the reign of Suleiman I the Magnificent in the mid 15th century, the six-story tower is 40 m (131 ft) high and 23 m (75.5 ft) in diameter, with sturdy stone walls dotted with tiny arrow slits. Originally it formed part of the city’s fortifications and was used by Thessaloniki’s Turkish invaders as a place of public execution. Since then the tower served as a communications center in World War I and later as a meteorological laboratory. Three more towers and a defense wall were knocked down after the fire of 1917, and its current use is as a visitor center with an exhibition detailing the turbulent history of the city. A viewing platform at the top of the tower looks out over the sea in one direction and the rooftops of Thessaloniki to the other.
One of the most popular evening pastimes for Thessaloniki locals is the waterside stroll up Nikis Avenue, starting at the old port and winding up in front of the White Tower.

1
Enjoy the pretty sights of Thessaloniki on a fun and informative hop-on hop-off bus tour. With unlimited access to the bus route for 1 day, hop on and off as much as you please, seeing all of the major landmarks along the way. From the open-top deck enjoy 360 degree views of the stunning coastal landscape. This Greek port city has ancient origins, and you can explore some of this fascinating history if you hop off at Ano Poli (Upper Town). The on-board audio tour commentary adds an educational element to your experience, ensuring you learn fascinating facts as you cruise round. On your sightseeing journey you'll discover some incredible architecture, such as the Church of Agios Dimitrios, which dates all the way back to the Byzantium empire! There's so much to see in this destination, and with bus stops placed at all the best spots in town, this double-decker bus tour is the most convenient and enjoyable way to see Thessaloniki.
...  More
From
US$17.07
From
US$17.07
Learn More

5
Experience the rich historical legacy of Thessaloniki during this private walking tour led by a local archaeologist. Discover a variety of UNESCO World Heritage monuments from the Byzantine and Roman eras, visit the famous White Tower, and step back in time at the Greek Agora and Roman Forum. A private guide and a snack are included.
...  More
From
US$156.57
Price varies by group size
From
US$156.57
Price varies by group size
Learn More

The tour begins at the White Tower of Thessaloniki, which is the most commonly known monument of Thessaloniki and the symbol of the city because of its prominent position, long history and implosive architecture. Your tour then continues towards the Nea Paralia where you will be able to see the statue of Alexander the Great and then you can admire the famous umbrellas a true ornament of the City. Coming back you will visit the OTE Tower located in Thessaloniki’s International Fair Grounds and from there you have the option to enjoy your coffee on the Tower’s café bar or to follow the rest of the group at the final stops on the Arch of Galerius (Kamara).
...  More
From
US$45.29
US$56.61
US$11.32 savings
From
US$45.29
US$56.61
US$11.32 savings
Learn More

Meet us at the pickup point near your hotel and begin the sightseeing tour of Thessaloniki. You will have the opportunity to see the White Tower, the main landmark of the city, the Galerius Arch, the Rotonda monument, the Old Town (Ano Poli) and the City Walls, where you will be able to admire the marvelous view of Thessaloniki! During your tour, there will be a short stop at Agios Demetrius Byzantine church and its crypt and you can also visit the Archaeological Museum. Free time in the city center and return to the hotels.
...  More
From
US$420.00
From
US$420.00
Learn More

1
Explore Thessaloniki on a half-day tour, and discover the history of monuments such as the White Tower and Agios Demetrius Byzantine church. Learn about the city’s historical importance and sights from your guide, and pay a visit to the Archaeological Museum of Thessaloniki to see artifacts from a range of eras including the Classical and Hellenistic periods. The entrance fee is at your own expense.
...  More
From
US$43.36
From
US$43.36
Learn More

4
The highlight tour lets you see the most amazing sights of Thessaloniki by bike. Explore traditional Greek markets and marvel at the White Tower situated on the beautiful boulevard. Discover the secrets of the city and the ancient Roman history. All provided by a local guide.
...  More
From
US$37.06
From
US$37.06
Learn More

A full-day city tour of Thessaloniki passing through the town's main sights. See the White Tower and the Old Town, before making a stop at Agios Demetrius Byzantine church and its crypt.
...  More
From
US$790.59
From
US$790.59
Learn More

A full-day city tour of Thessaloniki passing through the town's main sights. See the White Tower and the Old Town, before making a stop at Agios Demetrius Byzantine church and its crypt.
...  More
From
US$54.20
From
US$54.20
Learn More

Half day city tour to visit the Archaeological Museum of Thessaloniki with its gold and silver treasures and many other finds of the area of Central Macedonia, the famous UNESCO monument of the Rotonda, walk by the White Tower, the Roman Forum and the Arch of Galerius and visit the basilika of St. Demetrios, patron saint of the city. Your qualified guide, Efi will explain everything about her home town. Get a taste of the second biggest city of Greece with its rich history, lots of monuments, views, great gastronomy and sea breeze on the waterfront
...  More
From
US$197.65
per group
From
US$197.65
per group
Learn More

4
Grab a helmet, hop on a bike, and get to know charismatic Thessaloniki on two wheels. Explore magnificent monuments, discover the city’s coolest cafes and hang-out spots, glide along the picturesque waterfront and find out more about Thessaloniki’s thrilling ancient past and how it has transformed itself into Greece’s second largest and most important city in recent years.
...  More
From
US$68.65
From
US$68.65
Learn More

5
Discover Thessaloniki without joining a crowded sightseeing bus or spending up large on guidebooks with this morning walking tour. Roam around the central city in a small and easygoing group and stop by a range of historical and cultural highlights. Visit the monuments to Emperor Galerius, from his palace to his mausoleum, and stroll around ancient city markets like the Kapani Ottoman market and the Modiano Jewish market.
...  More
From
US$37.06
From
US$37.06
Learn More

2
Our Ride & Bite bike tour Thessaloniki is the best tour for the real foodies amongst us. In three hours we cycle around several market places and through Ladadika neighbourhood. We will visit the best local culinary shops and stop regularly to try local delicacies and small dishes. Our Ride & Bite bike tour Thessaloniki is a relaxed and tasteful bike tour that teaches you everything there is to know about Greek table manners and eating traditions. Our English-speaking, local tour leaders provide for the insight into Greek cuisine, telling you about their own experiences and cooking habits.
...  More
From
US$67.95
From
US$67.95
Learn More

3
During the ‘Culinary walking tour’ you will be using all your senses to get to know the Greek kitchen. Your enthusiastic tour leader can not wait to let you taste all the good stuff and tell you everything about the local habits. We walk through the city center and visit local shops, either immemorial or modern and a bit more luxurious. We introduce you to the proud owners of the family businesses and of course we’ll be visiting the central market!
...  More
From
US$67.95
From
US$67.95
Learn More

Buy your hop-on, hop-off bus tickets today and get ready to explore Thessaloniki with City Sightseeing! Once part of the Roman, Byzantine and Ottoman Empires, this Greek port city has a rich history which is just waiting to be discovered. Many monuments have been listed as UNESCO World Heritage Sites, with some of the mosaics considered great masterpieces of Early Christian art, as we pass most of them with our open top double decker buses. Furthermore, our daily valid tickets give our customers the flixibility to explore the city sights at their leisure and with their own pace.
...  More
From
US$19.27
From
US$19.27
Learn More

Have a Professional Photoshoot in Thessaloniki, be a model for a day and showcase your persona in one of the most beautiful places in the world!
...  More
From
US$168.62
From
US$168.62
Learn More

Things to do near Thessaloniki