Welcome to Viator!
By creating an account, you agree to our Terms & Conditions and Privacy Policy.
We're creating your account. This may take a few seconds...
Account creation successful! Thank you.
Something went wrong. Please try again on the sign up page.
Questions? (888) 651-9785(888) 651-9785
When are you traveling?
Select Dates
Recommendations
All Recommendations
How to Spend 3 Days in Trujillo
Top Archaeological Sites in Trujillo
Price
US$0
US$500+
Duration
Time of Day
RatingClear
Specials

How to Spend 3 Days in Trujillo 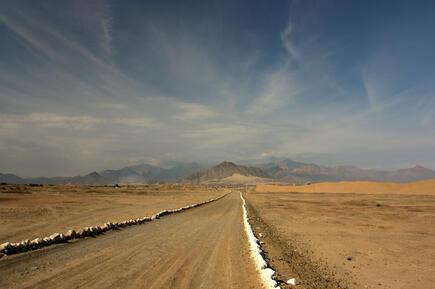 The city of Trujillo has a bit of an identity crisis; stuck somewhere between beach town and archeological playground, there is also a heavy Colonial presence that dominates the center of the city. Luckily for travelers visiting Trujillo, it’s possible to experience all the different identities over the course of three action-packed days.

Trujillo is known more than anything else for its well-preserved temples and ruins. It only makes sense, then, to begin the day at Chan Chan—the largest adobe city found anywhere in the world and the capital of the Chimu Empire. While smaller temples—such as the Temple of the Dragon—are included in the Chan Chan entrance fee, the main highlight is Tschudi Palace and its exquisitely carved alleyways and walls. In the afternoon, travel back almost 2,000 years to the days of the Moche Empire, and stare in wonder at the hand painted murals at the temple of Huaca de la Luna.

Before diving into the Colonial charms, spend the morning taking a drive to the temple complex at El Brujo. The distance from the city makes for fewer visitors, although the excavated tombs and cultural relics offer no less fascination or intrigue. Back in Trujillo after the morning at El Brujo, spend the afternoon enjoying the sites that were so eloquently constructed by the Spanish. Tour the interior of Casa Urquiaga to get a feel for the Colonial elite, and examine the collection of religious artwork at the historic El Carmen Church. By night, stroll the happening Plaza de Armas with its soaring monuments and statues, and photograph the yellow Trujillo Cathedral illuminated against the night sky.

After two days of Trujillo history, enjoy a day of action and adventure along the wild Peruvian coastline. Take a sandboarding tour to slide down dunes that loom above rural villages, or spend the day exploring surf culture at the coastal suburb of Huanchaco. While here, take a ride on acaballito de totora to experience the world’s first surf craft, and end the day with a plate of ceviche while watching the sun sink into the sea.

4 Tours and Activities | All Trujillo Tours

1
Explore Trujillo and its nearby archeological sites on a day-long tour. First, set out on a private sightseeing tour of Trujillo—stopping at attractions like the beloved Central Market. Then set out for a guided tour the National University of Archeology, Anthropology and History and a visit to the Temples of Moche (which includes the Temples of the Sun and Moon) and Huanchaco, a picturesque beachside town. Cap off your day wandering among the ancient ruins of Chan Chan, the former capital of Peru's Chimú people.
…More
From
US$153.80
Price varies by group size
From
US$153.80
Price varies by group size
Face masks required for travelers in public areas
Face masks required for guides in public areas
Hand sanitizer available to travelers and staff
Learn More
Taking safety measures

1
Get acquainted with Trujillo during a 3-hour sightseeing excursion that visits the city's main sights and attractions. You'll enjoy a guided tour of the National University of Trujillo Museum of Archeology, Anthropology and History and explore such places as the Plaza de Armas and Plazuela El Recreo, in the city's historic center. For a more one-on-one experience, upgrade from a group to a private tour.
…More
From
US$48.70
Price varies by group size
From
US$48.70
Price varies by group size

Peru may be known for its Inca heritage, but the country was also home to many fascinating pre-Incan peoples. Explore their history and cultures on a guided 3-day archeological tour from Chiclayo to Trujillo. Delve into the ancient worlds of the Sicán, Chimú, and Moche civilizations with visits to Huaca Rajada (1987 excavation site of the Lord of Sipán mummy ) the Valley of the Pryamids, the former Chimú captial of Chan Chan and much more. Choose from a variety of budget-friendly lodgings to further enchance this multi-day trip.
…More
From
US$692.00
From
US$692.00
Face masks required for travelers in public areas
Face masks required for guides in public areas
Hand sanitizer available to travelers and staff
Learn More
Taking safety measures

Get a head start on your Trujillo holiday with an easy ground transfer to your Trujillo lodging. Simply book ahead and an expert driver will meet you upon arrival to Capitán FAP Carlos Martínez de Pinillos International Airport, transporting you in a private and comfortable air-conditioned vehicle directly to your hotel. No waiting in shuttle or taxi lines with this 24-hour service!
…More
From
US$21.20
Price varies by group size
From
US$21.20
Price varies by group size
Face masks required for travelers in public areas
Face masks required for guides in public areas
Hand sanitizer available to travelers and staff
Learn More
Taking safety measures