Welcome to Viator!
By creating an account, you agree to our Terms & Conditions and Privacy Policy.
We're creating your account. This may take a few seconds...
Account creation successful! Thank you.
Something went wrong. Please try again on the sign up page.
Questions? (888) 651-9785(888) 651-9785
When are you traveling?
Select Dates
Recommendations
All Recommendations
How to Spend 1 Day in Warsaw
How to Spend 2 Days in Warsaw
How to Spend 3 Days in Warsaw
Communist History Tours in Warsaw
Price
US$0
US$500+
Duration
Time of Day
RatingClear
Specials

How to Spend 2 Days in Warsaw 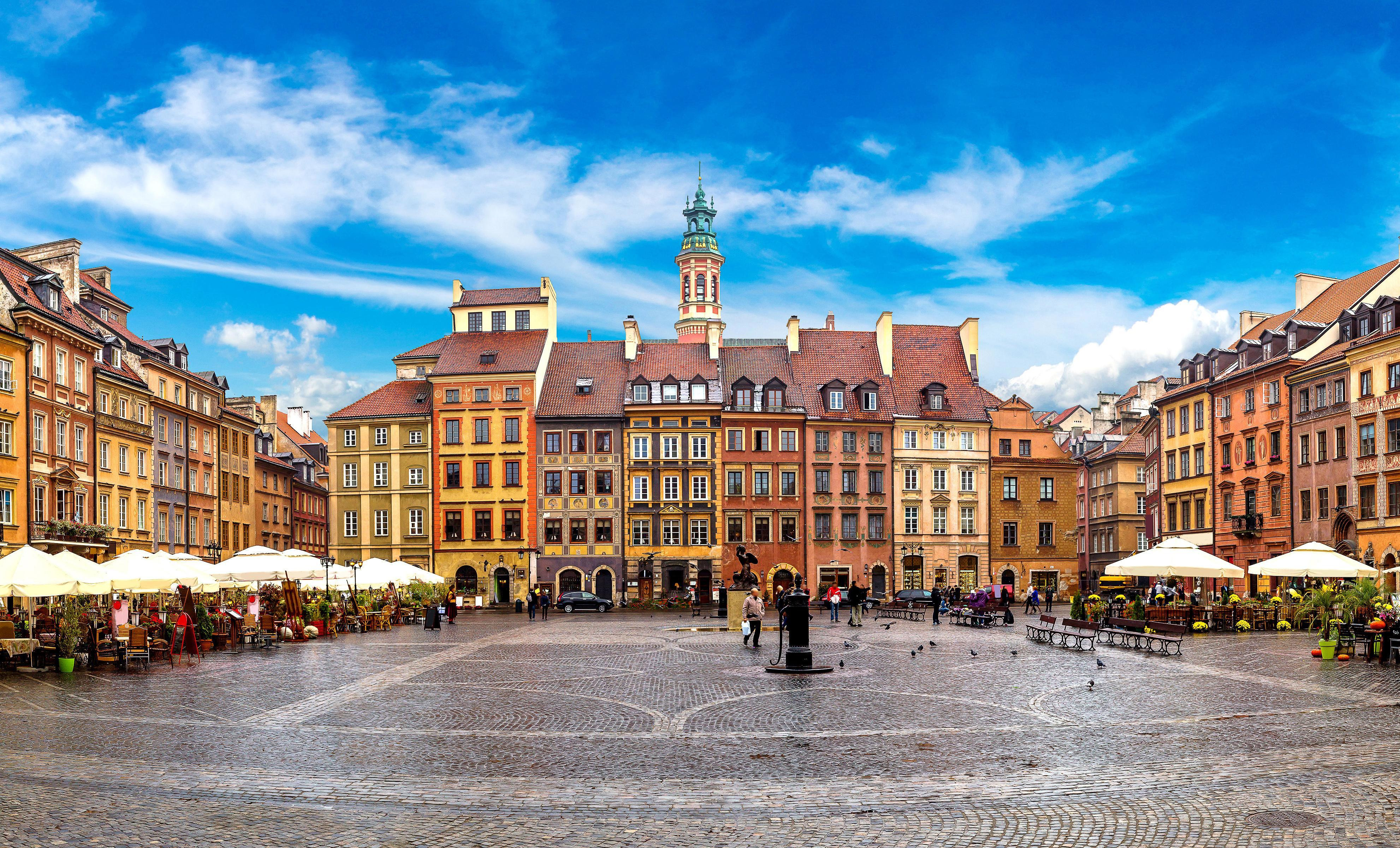 Two days in Warsaw give you the chance to see highlights of the city, from the Old Town UNESCO World Heritage Site to the Warsaw Jewish Ghetto and other Second World War sights and still have time to pay tribute at a Nazi concentration camp. Along the way, discover Poland’s cuisine and nightlife, washed down with plenty of vodka. Here’s how.

**Morning:**Start the day by discovering Warsaw’s charming Old Town, either on a dedicated walking tour or as part of a broader city tour. Learn about the Polish capital’s 1,400-odd years of history as you tour Old Town Market Square, Warsaw Royal Castle, St. John’s Cathedral, the Warsaw Barbican, and more.

**Afternoon:**Explore the lost world of Warsaw’s prewar Jewish community. Tour the site of the Warsaw Jewish Ghetto, including Nożyk Synagogue and the remains of the ghetto wall. See the Jewish Cemetery, pay your respects at the Monument of the Ghetto Heroes, and visit the POLIN Museum of the History of Polish Jews.

**Night:**Add a range of authentic Polish recipes to your repertoire with a hands-on cooking course, covering classics such as pierogi (dumplings) and buckwheat pancakes. Then get a handle on the city’s nightlife—as well as its vibrant beer scene—with a good old-fashioned pub crawl.

Day 2: Into the Dark

**Day:**Pay tribute at one of the World War II concentration camps, where millions went to their deaths during the Nazi German occupation. Treblinka is the nearest camp to Warsaw. The site where the extermination camp once stood is now a ghostly open-air memorial lined with jagged stones, although remnants of the labor camp still stand. Alternatively, travel farther to the Auschwitz-Birkenau Museum and Memorial, site of the world’s most notorious concentration camp. The camps at Auschwitz and Birkenau are well-preserved, and the barracks house a powerful and moving museum of the Holocaust, but the site is busier than Treblinka.

**Night:**Slough away the darkness by immersing yourself in the music of a homegrown Polish genius, Frédéric Chopin, at a piano concert at a heritage property. Alternatively, dive deeper into the world of Polish food on a culinary tour that checks off craft breweries and bakeries alike.

15 Tours and Activities | All Warsaw Tours

91
First time in Warsaw? Explore the parks, plazas and palaces of the Polish capital on this comprehensive 3-hour sightseeing tour. Stroll around the UNESCO-listed Old Town, marvel at the Royal Castle, then stop to snap photos of St. John's Cathedral, the Holy Cross Church and the Royal Park. Next, learn more about Warsaw’s tumultuous history as you walk through the Jewish Ghetto, pay your respects at the Tomb of the Unknown Solider and visit the site of the Mila 18 bunker. This small-group tour is limited to 15 people.
…More
From
US$41.64
From
US$41.64
Face masks required for travelers in public areas
Hand sanitizer available to travelers and staff
Social distancing enforced throughout experience
Learn More
Taking safety measures

Warsaw Behind the Scenes for Small Group Tour by Retro Minibus

106
Get beyond Warsaw’s tourist trail on a history and culture tour that offers a unique insider’s perspective on the city. Board a Communist-era Zuk van and explore the architectural heritage of Socialist Realism. Step in pre-war courtyards tucked off elegant streets, learn the stories of the families who lived in Warsaw’s Jewish ghetto, and see where Germans and Poles clashed in fierce street battles. Visit the hip neighborhoods of the artistic Praga district, and sample Polish delicacies, pastry and vodka in local eateries as you learn to order, eat and drink like a Pole.
…More
From
US$52.47
From
US$52.47
Hand sanitizer available to travelers and staff
Gear/equipment sanitized between use
Transportation vehicles regularly sanitized
Learn More
Taking safety measures

221
Explore Warsaw from behind the wheel of a vintage Fiat 125p on this private tour. Hop aboard to see the city’s top attractions, including Castle Square, Soviet-era architecture and the Old Town. Opt to add a museum visit, stops at the former Jewish Ghetto or bohemian Praga district or any other points of interest. Pick up insightful Polish history from your guide and top off your trip with a snack or meal (own expense) at a communist-era milk bar.
…More
From
US$74.35
Price varies by group size
From
US$74.35
Price varies by group size
Face masks required for travelers in public areas
Face masks required for guides in public areas
Hand sanitizer available to travelers and staff
Learn More
Taking safety measures

16
The best way to immerse yourself in Polish culture is to learn about its great food. On this fantastic cooking experience, you won’t have to worry about being hungry, as you’ll arrive to a buffet of meats, cheeses, and breads. Your instructor will explain step-by-step how to make Polish dumplings (pierogi), and later you can try them. An optional vodka tasting is also available, where you’ll try multiple flavors and learn about Poland’s history of vodka.
…More
From
US$83.34
From
US$83.34

6
Visiting Krakow and Auschwitz by yourself is almost impossible if you don’t rent a car. Avoid the hassle of driving yourself with this private tour that includes round-trip transport from Warsaw. Plus, your admission ticket to Auschwitz-Birkenau State Museum allows you to explore the former concentration camp at your own pace. Your guide also takes you on a tour of Krakow afterward.
…More
From
US$370.61
Price varies by group size
From
US$370.61
Price varies by group size
Hand sanitizer available to travelers and staff
Social distancing enforced throughout experience
Regularly sanitized high-traffic areas
Learn More
Taking safety measures

105
Discover Warsaw’s Jewish heritage from the seat of a Fiat 125p on this private tour. Led by a local guide, hop aboard your vintage vehicle to see the Jewish Cemetery, Nożyk Synagogue, and the Ghetto Wall. Feel free to mention any other points of interest to your private guide, including a stop at the Museum of the History of Polish Jews. Help yourself to included snacks and opt to pull over along the way to purchase a meal at an authentic Polish restaurant.
…More
From
US$74.35
Price varies by group size
From
US$74.35
Price varies by group size
Face masks required for travelers in public areas
Face masks required for guides in public areas
Hand sanitizer available to travelers and staff
Learn More
Taking safety measures

Chopin Concert in the heart of Warsaw Old Town

83
Chopin was one of Poland’s most famous composers, and his hometown was Warsaw. This tour combines a music concert with a short speech that teaches you about the background of Chopin. Enjoy a concert in a historic building conveniently located in Warsaw’s Old Town—which means it’s easy to reach by taxi or public transport. You're also be treated to a traditional Polish glass of mead or apple juice.
…More
From
US$21.41
From
US$21.41
Face masks required for travelers in public areas
Hand sanitizer available to travelers and staff
Regularly sanitized high-traffic areas
Learn More
Taking safety measures

183
See Warsaw’s top attractions on a City Sightseeing hop-on hop-off tour, valid for 24 or 48 hours. Hop aboard the double-decker bus and pass the Royal Castle, the National Museum, the UNESCO-listed Old Town and more. Hop on or off along any of the route’s 10 stops and enjoy exploring this vibrant capital city at your own speed.
…More
From
US$22.60
From
US$22.60
Face masks provided for travelers
Hand sanitizer available to travelers and staff
Regularly sanitized high-traffic areas
Learn More
Taking safety measures

245
Delve into the riotous revelry of Warsaw’s nightlife on a pub tour of the Polish capital. With a knowledgeable guide, visit a selection of Warsaw’s most fashionable and atmospheric drinking venues and enjoy complimentary drinks and special discounts in each one. Conclude your fun-filled night at a popular club, where you can opt to dance and drink until the early hours of the morning.
…More
From
US$18.31
Price varies by group size
From
US$18.31
Price varies by group size
Hand sanitizer available to travelers and staff
Regularly sanitized high-traffic areas
Guides required to regularly wash hands
Learn More
Taking safety measures

22
Discover the poignant history of Treblinka, home to a former Nazi concentration camp and penal labor facility, on a 7-hour tour from Warsaw. Far less crowded than the Auschwitz-Birkenau Memorial and Museum, Treblinka features a museum, commemorative monuments, and peaceful natural landscapes. This small-group tour is limited to eight people to ensure an intimate atmosphere. Lunch, entrance fees, and hotel pickup and drop-off are included.
…More
From
US$175.40
Price varies by group size
From
US$175.40
Price varies by group size
Hand sanitizer available to travelers and staff
Regularly sanitized high-traffic areas
Gear/equipment sanitized between use
Learn More
Taking safety measures

Auschwitz and Birkenau Tour from Warsaw

9
Take a detour from the Polish capital to remember victims of the Holocaust on a day trip to Auschwitz-Birkenau from Warsaw. Tour the former Nazi concentration camp and UNESCO World Heritage Site with a guide, learning about its dark history through museum displays and remnants of barracks, gas chambers, crematoria, and watchtowers. Take time to reflect on the shared drive to and from the site while traveling through the countryside.
…More
From
US$104.69
Price varies by group size
From
US$104.69
Price varies by group size

30
Taste your way through Warsaw like a local on a half-day Polish food tour. Beginning with pickup in a Communist-era minibus, reach the capital’s best eateries and markets; sample authentic specialties like dumplings, cabbage soup, sausage, and decadent pastries; top it all off with a shot of strong Polish vodka.
…More
From
US$89.08
From
US$89.08
Hand sanitizer available to travelers and staff
Gear/equipment sanitized between use
Transportation vehicles regularly sanitized
Learn More
Taking safety measures

14
This Segway tour of Warsaw is a fun way to check out the historical sites. You can cover much more ground than you would if taking a walking tour, while still being just as environmentally friendly. Your local guide knows all the interesting nooks and corners of the city, and will lead you on a history-themed tour. Segways are easy to use, and after an informative briefing, all participants should feel comfortable using theirs.
…More
From
US$105.25
From
US$105.25

19
Experience Warsaw’s legendary bar culture on a 3-hour, private tour in a classic Fiat 125p. Kick off your night with a drink of locally-made herbal vodka and hear stories about life in the city as you explore with your driver and guide. Visit Communist-era bars for snacks and drinks then pause for a shot beside the Palace of Culture and Science. Continue to atmospheric bars in the Praga and Powiśle districts, and get a comprehensive experience of Poland’s vodka culture by sampling ten different bottles before returning to your hotel.
…More
From
US$89.22
From
US$89.22
Face masks required for travelers in public areas
Face masks required for guides in public areas
Hand sanitizer available to travelers and staff
Learn More
Taking safety measures

Historical Tour of Communist Warsaw In A Nysa 522 With Pickup

28
Enrich your knowledge of Warsaw’s communist history on an educational tour of the Polish capital. Accompanied by a knowledgeable guide, travel around Warsaw in an authentic communist-era vehicle, visiting sites associated with Poland’s socialist history; discover the impressive interior of the Palace of Culture and Science; browse intriguing exhibits in the Communism Times Museum; and stop at Constitution Square.
…More
From
US$48.81
From
US$48.81