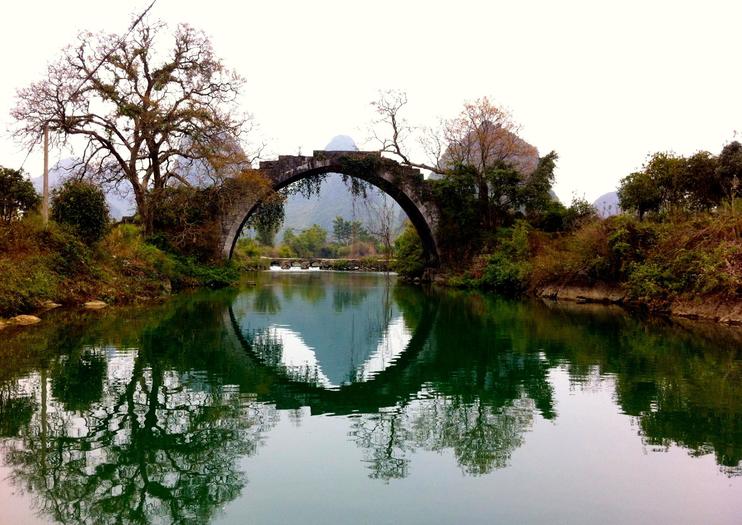 While the Yulong Bridge is the largest single-arch bridge in the province and the Xiangui Bridge is the oldest passage across the Yulong River, the Fuli Bridge is the tallest span. When seen from a distance, the bridge’s high arched back and the reflection it creates in the water form a perfect circle, called a full moon by locals.

The Basics
Although located only a short distance from the very popular Yulong Bridge, the Fuli Bridge is somewhat of a hidden gem, overlooked by many visitors to the area. Since bamboo rafts rarely make it this far upriver and it’s well off the tourist-bus circuit, travelers will often find themselves alone at the bridge (or sharing it with some local village children swimming in the shallow waters). While big tour groups rarely visit, it is possible to see the bridge with a guide. A stop here is sometimes included in guided photography tours of the region, as well as multi-day small-group biking trips (you’ll stop for a cooling swim, just like the locals).

Things to Know Before You Go
How to Get There
Fuli Bridge can be found about 7 miles (12 kilometers) outside of Yangshuo along the Yulong River. It’s easiest to simply rent a bicycle or scooter and head there via the village of Yantang. Another option is the Yangshuo–Jinbao bus, which makes a stop at Jinlong Bridge. From there, you can walk north the rest of the way.

When to Get There
The best weather for enjoying the outdoors while biking along the Yulong River tends to fall between April and June or September and October. It’s typically too cold to swim in winter (December to March).

Bridges of China
Stone-arch bridges, such as the Fuli Bridge, are the most common type of bridge you’re likely to see in China. Lurenqiao, the oldest such bridge, was built near Luoyang Palace in AD 282. While the bridges across the Yulong River typically only have a single arch, the Baodaiqiao bridge in Suzhou has 53 arches.
Address: Yangshuo, China
Read MoreShow Less

Trekking is a good way to explore Yangshuo. You can see the ethnic customs, pastoral scenery, history and culture, and travel with your senior guides. You will know more about Yangshuo and wish you a pleasant trip!
…More
From
US$56.38
From
US$56.38

Discover many of Yangshuo’s scenic highlights in just one day, and enjoy a seamless and comfortable way to explore, on this private car tour. Meet your guide directly at your hotel in the morning, and hop aboard. You’ll see famous local landmarks like the Fuli Bridge; will visit a series of picturesque, centuries-old villages; will embark on a ferry trip; and will otherwise admire the region’s characteristic scenery, including soaring karst mountains, mist-draped hills, and vibrant rice paddies.
…More
From
US$105.71
per group
From
US$105.71
per group

Particularly for first-time visitors who don’t speak Chinese, a private guide can transform the Guilin experience. Say no to hustlers and discover the city by private car on this door-to-door private tour. Check off three of Yangshuo's biggest attractions— Yulong River, Xianggong Mountain, Yangshuo Town and Bike along the beautiful countryside for a more. A comprehensive package with private driver, entrance fees, and lunch are all inclusive.
…More
From
US$178.00
Price varies by group size
From
US$178.00
Price varies by group size

Things to do near Yangshuo