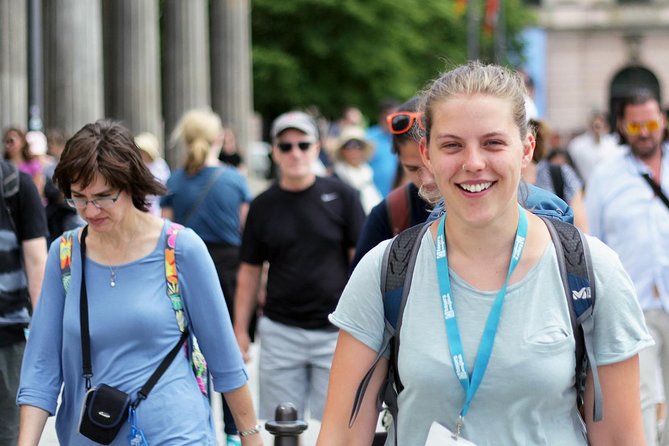 Experience Berlin’s past and present on this half-day guided walking tour through the city's Mitte district. Visit landmarks from the city’s Prussian, Imperial, Nazi, Cold War and modern eras, offering insight into the evolution of this fascinating German capital. Stroll along the iconic Berlin Wall and follow Unter den Linden to the Brandenburg Gate. Then check out the rebuilt Reichstag and the Holocaust Memorial and hear the amazing stories of Cold War Berlin at Checkpoint Charlie. Your walking tour of Berlin also includes a complimentary city map and guidebook.

Learn about Prussian kings, the Nazis, and the city’s modern rebirth in areas such as Potsdamer Platz.

Take a walk back in time as you explore the many layers of history found in Berlin, covering everything from its Prussian period, to its violent 20th century and the present period of rebirth. History fans and those interested in the remarkable renaissance of Berlin’s urban center will enjoy this insightful, half-day trip past the city’s key monuments.

Start your day at Neue Promenade 3 where you'll meet your guide. Listen to an introductory overview of the strange, winding history of Berlin, covering the city’s founding and continuing with stories about the turbulent years of war and modern era as the tour moves forward. Walk down Berlin’s Unter den Linden boulevard, a thoroughfare that links Stadtschloss royal palace with Pariser Platz and Brandenburg Gate. By the 19th century, this elegant street was among the most famous in the city, growing even more grand as Berlin’s boundaries pushed further west.

Head next to Museum Island, pausing at the Berlin State Library (once the workplace of Albert Einstein) and the Neue Wache memorial as you continue. Travel beneath the monumental Brandenburg Gate, which forms the beginning of Unter den Linden, and check out the Reichstag, home of Germany’s parliament, just nearby. Then explore Pariser Platz, the location of Hitler’s bunker and the Holocaust Memorial, commemorating the many Jews that lost their lives during the Nazi regime.

Trace the path of the “death strip” to Checkpoint Charlie, the infamous crossing point for those traveling between East and West Berlin, and visit Bebelplatz, the location of an infamous 1933 book burning by the Nazis. You’ll then have time the stroll along the Berlin Wall, demarcating the boundary between East and West during the Cold War, and hear details about its triumphant downfall in 1989.

Take a moment to stop at the Topography of Terror Museum, situated at the former Gestapo and SS Headquarters. Hear from your guide about the significance of the museum’s location, which the city’s leaders consciously chose to help confront and reconcile the awful moments of Berlin’s past. Look down into the building’s excavated cellars, a haunting spot where political prisoners were once tortured and killed.

Wrap up your Berlin walk on a lighter note with a stop at the modern area of Potsdamer Platz, a one-time “dead zone” between East and West that has since been rebuilt. Then take a walk along Friedrichstrasse, a high-end retail district. You’ll end your tour at Gendarmenmarkt, where you’ll receive a city map detailing useful info on Berlin’s public transport, nightlife and museums.
1

The guide will explain the history of the site

The guide will explain the history of the site

The tour is a lot of walking and standing, so wear comfortable shoes.
I suggest comfortable shoes because you will walk a lot (maybe run a little bit)!
Not rushed, but lots of walking, so wear comfortable shoes.
Reviews
5
3,834 reviews
Total review count and overall rating based on Viator and Tripadvisor reviews
0
0
0
0
0
Reviews by Viator travelers
Showing 1-10 of 3,834 reviews
Awesome tour. Loved...
Brian_B, Jan 2022
Awesome tour. Loved listening to Steve giving life to Berlin's history. I was a walking icecicle by the end. Highly recommend.
Must Do Tour!
Valentina_S, Jan 2022
This was the first time my family and I had been in Berlin. One of the things we like to do is take a walking tour of the city to have someone knowledgeable share the history and insight on places we would walk by without giving it a second thought. Our guide, Xavier, was from France but has lived in Berlin for over 20 years. He was knowledgeable, professional, and enthusiastically full of energy. While walking around the various locations Xavier provided the historial significance of the locations as we walked back and forth from the old communist East Berlin side to West Berlin side. Xavier pointed out old Nazi buildings that had somehow survived the allied bombing, and locations where the Russians had taken over the buildings in the aftermath of WWII. One of the things we really enjoyed was Ampleman, the crosswalk green and red figures unique to East Germany. My son loves history and he spent most of the walking time between locations talking with Xavier, who patiently answered his many questions. I think if you want to get to know a city, the best way is by walking it, and having such a talented and knowledable guide makes the experience so much better. Take this tour. You will like it.
Christmas in Berlin
David_C, Jan 2022
The level of detail and reflection our tour guide provided was outstanding. His insight into the culture, history and mindset of the locals put the tour into perspective and gave us a better understanding of present day Berlin. Loved the discussion generated by his questions and learned more than just the surface information on the history and culture of Berlin. Although it was extremely cold the time was well spent. Also, being it was Christmas day very little was open. He did however, find a place for the group to warm up and have a hot beverage. Time well spent and will recommend it to others that visit the city.
An excellent tour guide!
Michael_S, Jan 2022
Chris (from Canada) did such a great job - it was clear he was super knowledgeable. Chris was happy to answer all of our questions and delivered our tour in a fun, engaging, charismatic and personable way! Chris provided us with an outline of the entirety of German history (not just the 20th century).
1 traveler found this review helpful
Great tour
Erin_P, Jan 2022
Campbell was accommodating, knowledgeable, funny, and a terrific tour guide. He took his time to answer all of the questions, and also ask questions that made the group think and be part of the experience.
Great trip
paovero, Dec 2021
It was a great walk, i learn a lot and our guide was excellent I was able to understand everything I don't know why they said that because He is australian you can not understand him, it is not true
Super guide (Xavier) a faire absolument
PHILIPPE_G, Dec 2021
Xavier was a perfect guide with interesting and good informations .with a very good leadership to manage the group. Thank you very much for this great tour. Worth it.
Perfect intro to Berlin. Thank you Heidi!
Arlette_G, Dec 2021
Perfect intro to Berlin. A must for first timers in the city. Excellent pace. Very personable guide. Thank you Heidi!
Great introduction to Berlin
Anna_A, Dec 2021
This was a great way to see some of the important areas of the city and learn about its history. Our tour guide Georgia was wonderful.
Fun, informative tour
Lisa_N, Dec 2021
Georgia was our tour guide, and she was fun, energetic and knowledgeable. Although from Aberdeen, she definitely loves her adopted home of Berlin
...