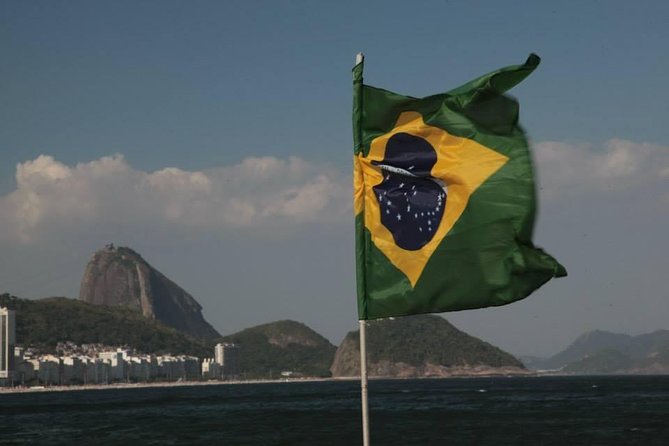 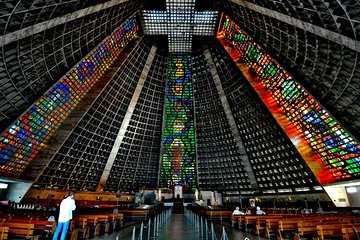 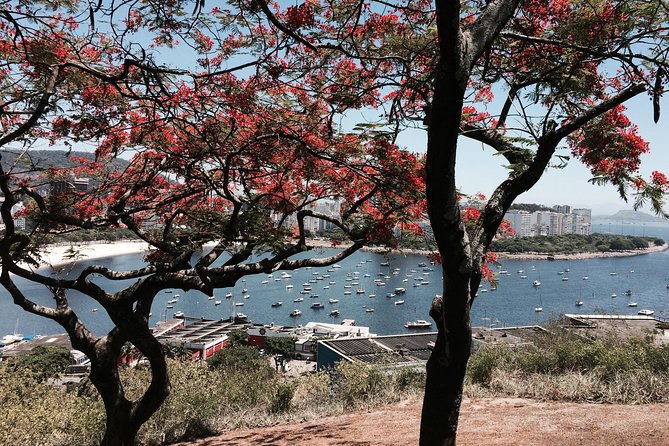 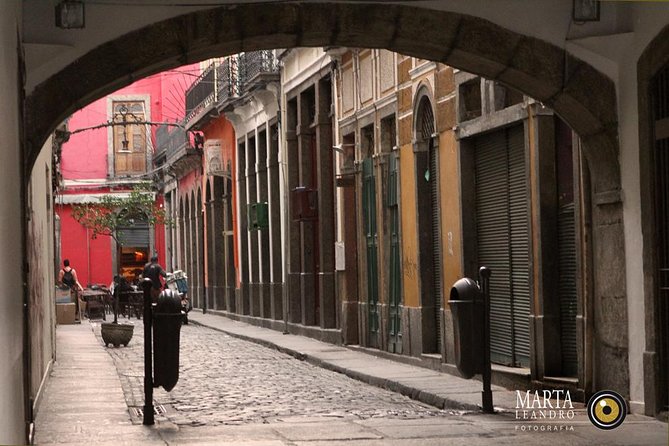 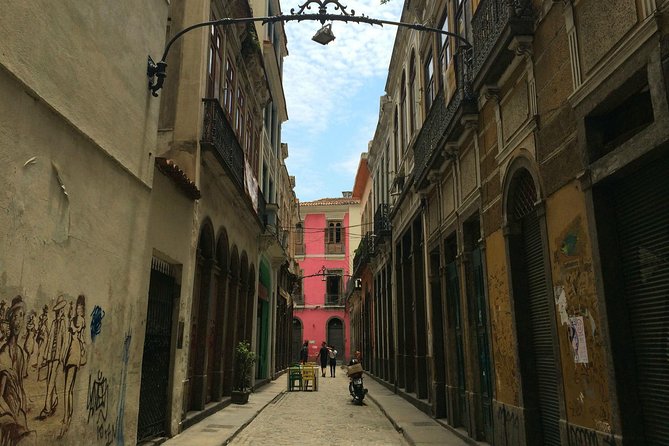 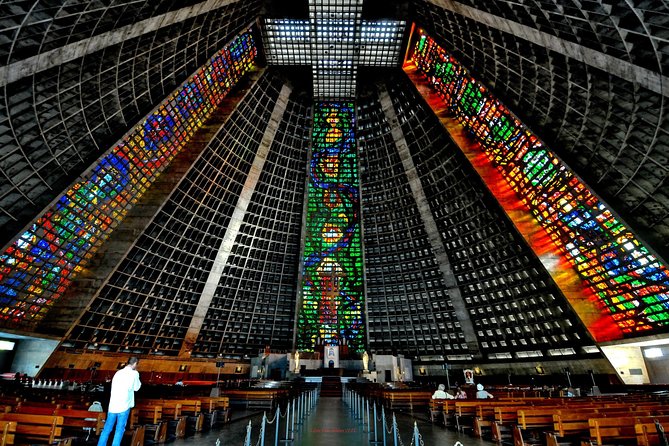 Get a comprehensive overview of Rio de Janeiro during this 8-hour private tour. With a dedicated local guide, hit all the important sites in town, like Corcovado Mountain and Christ the Redeemer Statue, Sugar Loaf Mountain, the famous beaches and the historic downtown area. Customize your itinerary to reflect your interests and enjoy informative commentary and personal attention from your guide along the way. Travel in a comfortable, air-conditioned vehicle that fits up to 4 passengers. Round-trip transportation from your Rio hotel is included.

Leonrdo was superb!! He explained everything and answered questions thoroughly

GaryR_L
Jewish Tour in Rio de Janeiro | Feb 2020
Leonardo was animated and gave excellent information about each temple.In addition,he gave interesting personal experiences that each of us enjoyed.
...Read more

A good guide would have made all the difference.

Susan_L
Jewish Tour in Rio de Janeiro | Feb 2020
We did a shore excursion and were told to be on the dock at 8:30. The other couple from the ship on our tour was told 9:00. After beginning the tour with a half hour wait, we drove to a hotel to pick up a third couple and waited about another half hour with the tour starting a full hour late. Not a good start! Also a tour booked as “shore excursion” should never make hotel pickups! Ephraim, our leader, said he was a tour guide teacher at one point. I don’t know what kind of teacher he was, but as a guide, he was extremely a poor. He had a hard time understanding us. He told us next to nothing while driving around the city. In one temple he simply handed us a sheet of information and sat down to wait for us to look around. The same happened at the Jewish museum where he handed us a pamphlet and waited for us to look around. The worst part in my opinion was when he pointed out a bathroom we could use. I went in and when I came out, he was gone with the group, having left no instructions as to where I could meet them. After looking all over two floors of the building without finding them, I spent the balance of that stop waiting in the van. After I had spent one hour waiting for the tour to start, I was outraged that he could not wait a few minutes for me or at least let me know where to find him when I was finished. The sights were worth seeing but the aggravation with Ephraim’s lack of leadership made this a very frustrating experience.
...Read more

ltk8779
Jewish Tour in Rio de Janeiro | Feb 2020
Katya (Kathie) was great. It was good to visit the various synagogues which were all different. The Jewish Museum is rather sad for a Jewish community as large as it is in Rio - just one room in an office block. Yitzchak Rabin park is not accessible at the moment. Enjoyed it but overall not masses to see.
...Read more

anotherjstone
Jewish Tour in Rio de Janeiro | Feb 2020
Whenever I travel outside the United Staes I also try to include a Jewish content to my visit. This was a great morning full of Jewish heritage and history. Leonardo was so personable. The tour was personalize to our interests. It also served as a wonderful introduction to the whole city of Rio De Janeiro.
...Read more

Great tour but felt out of place

Climber53887218389
City Tour-Christ Redeemer, Sugarloaf, Selaron Staircase, Maracanã - Full Day | Mar 2019
The tour was awesome. The problem was that the cathedral, which was part of the tour, was closed. I have to mention that we were the only participants who had to personally get tickets for the Christ Redeemer entrance while the rest of the group were purchased by the tour guide which made us feel out of place.
...Read more

Climber52142458010
Jewish Tour in Rio de Janeiro | Jan 2019
We had a wonderful Guide (Edwardo) and Driver (Bernardo). They made the tour interesting and enjoyable
...Read more

medburykjh
Corcovado with Christ Statue - Be One of the First to Get There | Oct 2018
Great pre tour information re our hotel pick up time. Good driver. Gisele was an efficient and helpful tour guide. It was easy for us to buy the entrance ticket with the credit card. We were one of the first to reach the Christ the Redeemer statue on a day with clear blue skies. This gave us stunning views of the surrounding area. The statue itself is very impressive and well worth a photo. The road trip up and down was also interesting. We were delivered back to our hotel in good time via a comfortable van.
...Read more

Amazing tour and guide. You Will see everything

espinosaloaiza18
City Tour-Christ Redeemer, Sugarloaf, Selaron Staircase, Maracanã - Full Day | Oct 2018
The tour was complete. We did not have to wait to much for the attractions, you get priority Pass :) Martín our guide was help full and funny. My husband and I really enjoy it
...Read more

77Eva1909
City Tour-Christ Redeemer, Sugarloaf, Selaron Staircase, Maracanã - Full Day | Aug 2018
We spent a beautiful day with Gisela and her driver. Gisela was very informative and took us to most of the beautiful sites of Rio. Our visits to the Christ and the Sugar Loaf were scheduled very early in the morning; therefore, we were able to avoid the long lines and big crowds. Highly recommended!
...Read more

Kiko the guide was amazing. We...

Kiko the guide was amazing. We happen to be on this tour on a very rainy day so the visibility from both Sugar Loaf and The Redeemer was almost ZERO. He took us to see the view from Yizhak Rabin Square which is not as high so we took some amazing photos. Aside from the fact that we got the full history of the city and great insight.
Thanks Efraim for having Kiko as your tour guide. I would highly recommend this trip.

Peterinl0nd0n
Corcovado with Christ Statue - Be One of the First to Get There | Jun 2018
We went on the early morning half day tour which promises to get you to Christ the Redeemer statue before the crowds. Well I thought it was too good to be true but we were actually the first group at the entrance to the park and therefore the first ones to get to the top. And it was well worth it to get those amazing views and pictures without hords of others blocking your shot. Our guide and fellow travelers were great too. The small group mixed well, would highly recommend to others.
...Read more

This tour was great! I saw everything I wanted to see in Rio in one day. My tour guide was informative and tried his best to keep the larger group on a schedule so that we could still get everything in. I would recommend this tour if you want to see all the famous landmarks all in one day.