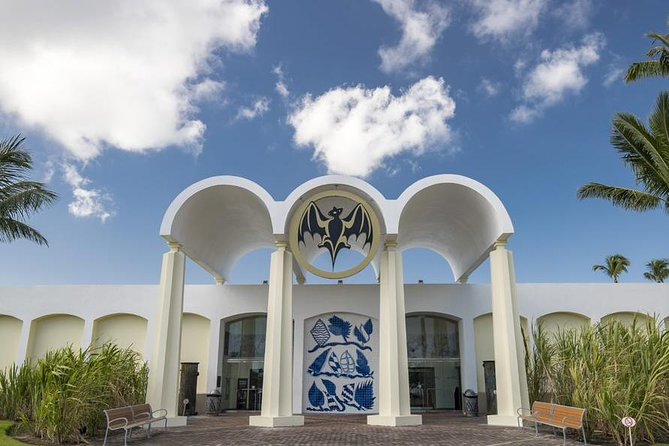 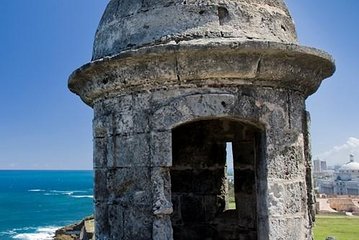 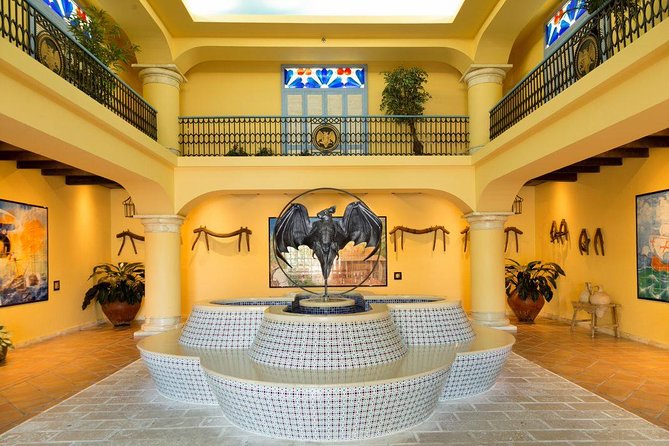 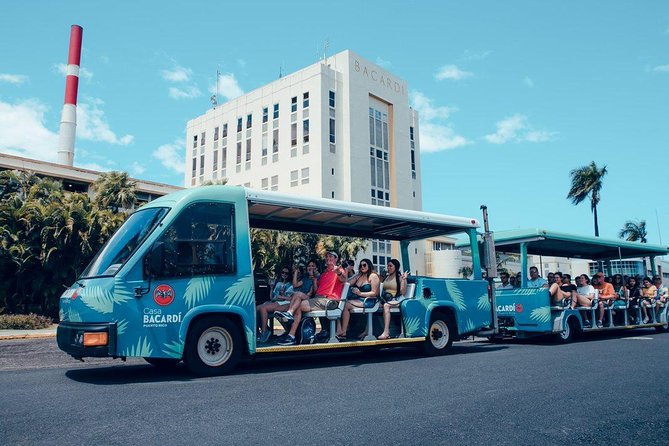 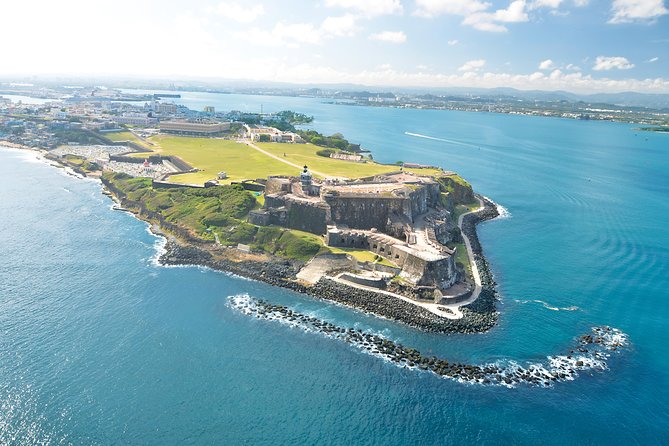 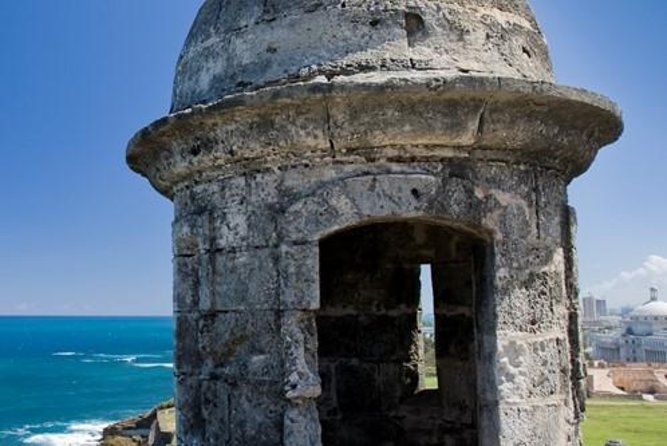 Uncover the history of Bacardi, the world’s most famous spirits company, on this half-day tour of Casa Bacardi, and a visit to historic Old San Juan. Step inside the world’s largest rum distillery for a handcrafted cocktail and an interactive tour of the company’s history. Then move on to Old San Juan to see the San Cristobal Fort, plus panoramic views of San Juan Bay. Your visit also includes round-trip transportation from select San Juan hotels, entrance fees at the distillery and San Cristobal, and a souvenir cup.

As well as a guided tour of the world's largest rum distillery, this tour includes ample free time to shop for souvenirs.

The tour starts with an afternoon pickup by minivan from select hotels in San Juan. Then proceed on to Cataño, the facility also known as Casa Bacardi. What is now the world’s largest rum distillery was founded in Cuba in 1862, before moving to Puerto Rico in 1936. Savor a handcrafted rum cocktail in the building’s pavilion before moving on to learn about the company history and distilling process.

Continue with an interactive exhibit detailing the lineage of this celebrated spirit brand and family-owned business. Check out a re-creation of the company’s original operation in Cuba, and admire artifacts and photos showcasing the brand’s unique heritage. Take a few minutes to sniff different varieties of rum before heading to the bottling plant for an overview of fermentation and production. Before you leave, peruse the gift shop for a few rum and Bacardi-themed souvenirs.

Next climb aboard your minivan to head to Old San Juan, a charming neighborhood first-settled by the Spanish in 1513. Listen to details of the area’s history while admiring the Capitol Building, bedecked in white marble, and the beautiful Moorish-inspired Casa de España.

Then take a look at La Muralla, a monster defensive wall nearly 20 feet (6m) thick and up to 60 feet (18m) tall, which was used by the Spanish to guard the city against invaders. Next move on to San Cristobal Fort, where you get out of the minivan to hear an overview from your guide about its unique layout and history defending the city.

End your tour with some time to shop among the cobblestone streets of Old San Juan, before your drop-off back at your San Juan hotel.

4.0
78 Reviews
5 stars
4 stars
3 stars
2 stars
1 star
Reviews by Viator travelers
We enjoyed the tour very much, the...
Dennis M
, Mar 2018
We enjoyed the tour very much, the Mojito at the Bacardi distillery were great. Seeing the old fort up close was very interesting.
... MoreLess
The Bacardi Distillery is awesome...
Luwana T
, Mar 2018
The Bacardi Distillery is awesome. The rum drinks are very good! The Old San Juan Tour is very informative. It like a lesson in history of San Juan. The old fort is amazing. The tour guide was amazing with history facts and information about San Juan.
... MoreLess
Thinking that we were going to see...
Linda
, Sep 2017
Thinking that we were going to see the actual distillery, instead we were taken by a Disneyland type motorized train to a building that provided us with a Disney Like Replica of the distillery operations and history of Bacardi which ends up in a large gift shop where you can purchase Bacardi products at full price. The only thing good about this trip is the mixed drink they serve before Bacardi takes you on their Fantasy Island tour.
... MoreLess
It was a great tour and our tour...
Evelyn B
, Aug 2017
It was a great tour and our tour guide, Javier Guzman from Watersports was really awesome!!! He was very informative, friendly and professional. Totally worth it!
... MoreLess
We did this on our first day, and it...
Matthew S
, Jul 2017
We did this on our first day, and it was a great way to see several things quickly. Each stop was very interesting. We had a great tour guide who provided lots of information at each point along the way.
... MoreLess
The tour guide was very friendly and...
dmerkau
, Jul 2017
The tour guide was very friendly and very knowledgeable. The biggest con was that he was running late and then at our last hotel pickup, the people weren't there so we wasted even more time in the van. This caused us to be raced through the distillery and The Fort. My husband and I are both history buffs so I was very upset about being raced through the fort since it was getting close to closing time. I am sure I would have thoroughly enjoyed the tour with this guide if we had been on time. I suggest if you want to take this tour, take it in the morning so if you are running late, you may not be raced through the sights.
... MoreLess
So well organized! I was only in...
jhirbour82
, Mar 2017
So well organized! I was only in San Juan for a short time and this was a great way to spend an afternoon seeing different areas I wouldn't have had time to see otherwise.
... MoreLess
was a great tour of Bacardi ,el...
john f k
, Feb 2017
was a great tour of Bacardi ,el Castillo fort and old san juan
... MoreLess
Because we couldn't be picked up at...
Darleen C
, Feb 2017
Because we couldn't be picked up at the El Conquistador, we had to pay 33.00 at the Ritz to park. Tour guide had such a thick accent we could not understand him. He took us to Barcardi and dropped us off for the tour, took us to the old fort and dropped us off to explore on our own, took us to Old San Juan dropped us off to look around, I could have done all of this on my own instead of paying for a guided tour. I am very disappointed in the lack of professionalism of this tour, lack of history of Puerto Rico, and help with getting around.
... MoreLess
If you are looking for a nice easy...
Smith.leanne
, Feb 2017
If you are looking for a nice easy afternoon/early evening excursion this is it. They pick you up and drop you off at your hotel. There are only maybe 10 guests total in the van. Each destination is not too long or too short and you get to see three Puerto Rico attractions - Bacardi, Old San Juan and San Cristobal Fort. Driver was friendly and helpful.
... MoreLess
Reserve Now & Pay Later
We'll reserve your spot today, and you can cancel up to two days before your experience without making a payment. Secure your spot with ease, stay flexible, and never miss out.
How it works
Find your experience
Choose the experience you want knowing you can secure your spot without being locked in.
Make a reservation
Reserve now and pay later to secure your spot, commitment-free.
Choose when to pay
Come back to pay once your plans are set, or let auto-pay kick in two days before your experience.
Enjoy your experience
Now you're all set! Have a great time.
Frequently Asked Questions  | Terms & Conditions
Reserve Now & Pay Later
Secure your must-do activities without being locked in
Learn More

Bus ToursHistorical & Heritage ToursAttraction TicketsHalf-day ToursCultural & Theme ToursDay Trips & ExcursionsSightseeing Tickets & PassesTours & SightseeingSan JuanCategory
Lowest Price Guarantee
We guarantee the lowest price on all 200,000+ experiences we sell. If you find the same product cheaper within three days of booking or while you're in your destination, we'll refund the difference.
It's Easy To Do