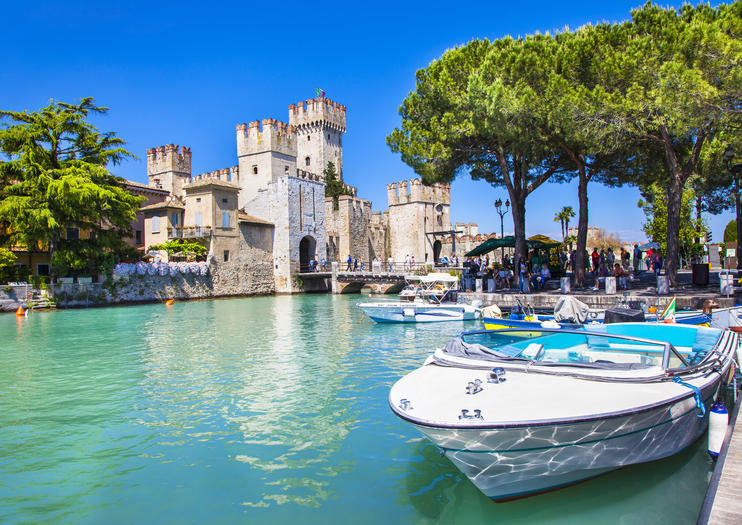 Set on the tip of a promontory jutting out into the waters of Lake Garda, and guarded by the fairy-tale-like Scaliger Castle, Sirmione is one of the most picturesque villages in Italy’s northern lake district. Explore the town’s postcard-perfect center and sights such as the nearby Roman Grottoes of Catullus.

The Basics
Sirmione has been a popular resort town since the first century BC, largely due to its thermal hot springs. Check out the village’s charming medieval center, the 13th-century Scaliger Castle (Castello Scaligero or Rocca Scaligera), and the Grottoes of Catullus, remains of a Roman villa named for a poet whose family lived in Sirmione in the first century BC.

Day trips from Milan, Bergamo, and Venice often pair visits to Sirmione and Desenzano del Garda with a stop in the romantic city of Verona. Or, enjoy views of Sirmione and Garda Island from the water on a Lake Garda mini-cruise or sunset cruise.

How to Get There
Sirmione is located in the province of Brescia, about halfway between Milan and Venice. Take a train to the lakeside town of Desenzano del Garda, then a local bus to Sirmione.

When to Get There
Sirmione’s historic center can get crowded in the summer. For a more tranquil experience, go in the spring or fall.

Sirmione’s Historic Scaliger Castle
Built by the powerful Scaliger (aka Della Scala) dynasty from Verona to protect Sirmione from attack, Scaliger Castle’s fortified walls and crenelated towers shelter the harbor once used by the Scaliger fleets. The fortress was used as a garrison until the 19th century, but lost its strategic importance after the unification of Italy.
Address: Sirmione, 25019, Italy
Read MoreShow Less

5 Tours and Activities to Experience Sirmione

2
Discover the scenic wonders of Lake Garda on a full-day tour of Italy’s largest lake from Milan by train. With a professional guide, visit picturesque villages cradled by gorgeous Alpine scenery and delve into the rich historical heritage of the area. See ancient Roman villas, foreboding fortresses and mysterious caves; marvel at the historical charm of Desenzano’s old port; and enjoy a tranquil boar cruise to Sirmione, where archeological treasures demand attention. Additionally, enjoy some leisurely free time to explore independently on this comprehensive sightseeing tour.
…More
From
US$120.44
From
US$120.44

Starting from the city of Milan, we will go to: Sirmione the pearl of Lake Garda is one of the most beautiful towns on lake Garda. You will see the Scaligeri castle, and the medieval town center of Sirmione if you like you will have a boat tour arond the castle of Sirmione, in this famous town, you will be surrounded by a multitude of tourists always present in Sirmione enjoining their day too! after visiting Sirmione, we will go to Verona the worldwide famous city of Romeo & Juliet to see Juliet’s house and the famous balcony of the last kiss of the two lovers! we will see the coliseum of Verona, called Arena,a splendid ancient building of the Age of the Roman Empire. We will walk through the medieval town center, to see the castle of Verona, the old bridge, the tower of Lamberti, the Scaligeri graves, the house of Romeo, the arch of Gavi and much more! This is a private guided tour for your group only or only for you if you are a single tourist.
…More
From
US$296.27
per group
From
US$296.27
per group

Enjoy a private full day trip to Verona and Lake Garda starting from your hotel in Milan. An english speaking driver will lead you to Verona, where one of the most romatic and famous stories of the world was set. We are talking about Romeo and Juliet. Stroll through the streets narrated by Shakespeare in a 2 hours guided sightseeing tour with a Local Guide. You will see the Juliet's Balcony, Piazza Della Signoria, the wonderful Ponte Pietra ( Stone Bridge), the unique Roman Arena. As soon as the two hours guided tours are over, you will stop for lunch ( own expenses) and then, meet your driver to continue the trip to Sirmione, a wonderful village on Lake Garda. It is uniqueness is that the inhabited village stands inside the walls of a castle overlooking the sea. Here you can enjoy a breathtaking view of the Lake. At he end of the day, your driver will take you back to your hotel in Milan. A wonderful experience to not miss, if you are spending some days in Milan!
…More
From
US$615.06
Price varies by group size
From
US$615.06
Price varies by group size
Face masks required for travelers in public areas
Face masks required for guides in public areas
Social distancing enforced throughout experience
Learn More
Taking safety measures

Spend a fantastic day visiting Lake Garda. Meet your guide and driver in Milan city center. You will visit the most famous village in Lake Garda with your guide. Take splendid photos in the medieval town such as Sirmione. Spend the afternoon in an amazing boat cruise from the charming village of Sirmione on the southern shore. Here you can visit the impressive ruins at “the Grottoes of Catullus“, and the Scaligera Fortress. The city is also famous for its thermal water, with meteoric origins. After some free time in town, in a 15 minutes walk you can reach the Catullus Grottoes situated in a splendid and panoramic position within the area of an archaeological park, just after the Antiquarium, where the finds of the original villa are placed. The visit to the Grottoes of Catullus has a deep value both for the archeological interest and for the beautiful panorama you can have from there. After the visit your driver will bring you back in Milan city center.
…More
From
US$618.62
Price varies by group size
From
US$618.62
Price varies by group size
Face masks required for travelers in public areas
Face masks required for guides in public areas
Social distancing enforced throughout experience
Learn More
Taking safety measures

2-Night Garda Lake and Verona Tour from Milan or Venice

Explore the natural beauty of Verona and Garda Lake during this 3-day private tour from Venice or Milan. Journey to Verona by train, then take an excursion to Sirmione to see the Grotte di Sirmione, an archaeological site dating from ancient Roman times. Take a historical walking tour of Verona, complete with a local food and wine tasting. Take advantage of the personal attention and flexibility that a private tour affords to customize your itinerary. Train tickets, all activities and overnight accommodations in a 3-star hotel in Verona with breakfast are included.
…More
From
US$824.99
From
US$824.99
Face masks required for travelers in public areas
Face masks required for guides in public areas
Social distancing enforced throughout experience
Learn More
Taking safety measures

Things to do near Lombardy