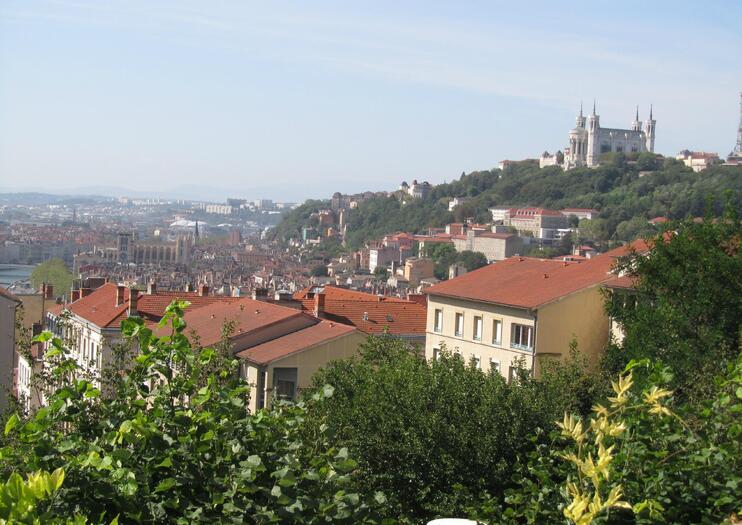 Centered around the 254-meter hill of the same name, the Croix-Rousse district was the heart of Lyon’s 18th-century silk industry, with the influx of workers earning it the nickname ‘the hill that works’, while neighboring Fourvière was dubbed ‘the hill that prays’. The historic district makes a fascinating addition to a walking tour, with its unique traboules - narrow, tunnel-like passageways that served as the setting to the 19th-century silk-workers revolt - snaking between the historic workshops and running down to the riverside. Today, some of the traboules have been restored, most notably the Passage Thiaffait, which is now home to the ‘Village of Creators’ and lined with artist’s galleries, crafts workshops and fashion boutiques.
The lively district retains its village-like atmosphere and is now crammed with bars, restaurants and cafes, many of which offer impressive views along the riverside. Additional highlights include the daily Croix-Rousse Market, the ruins of the Roman Amphitheatre of the Three Gauls, the landmark Gros Caillou (literally, a ‘Big Rock’) and the Croix-Rousse tunnel, a bus, bike and pedestrian route that burrows through the hill and is now the backdrop for a dazzling light and sound show.

12 Tours and Activities to Experience Croix-Rousse

41
Explore Lyon’s hillside Croix-Rousse quarter by mini-train rather than foot on this city tram tour. Board the train with its panoramic windows and roof, and trundle through the village-like streets of this one-time silk workers’ district, famous for its boho atmosphere, markets, and wall murals. Admire the traditional townhouses and best-known murals depicting historical local scenes and figures, including the ‘Murs des Canuts,’ and ‘Fresque des Lyonnais.’ Multi-lingual audio guide included.
...  More
From
US$10.32
From
US$10.32
Learn More

Discover the best of the lyonnaise gastronomy while visiting the charming Croix-Rousse district, famous for silk Weaving. Accompanied by your guide, learn all about the unusual history of this authentic district, with its unique atmosphere, like a village in the city. Taste the iconic regional specialties and learn about their secrets. In a fun and convivial atmosphere, this tour off the beaten tracks, is perfect to learn about the history and little anecdotes around the city. Charcuterie, cheese, wine and even chocolate, this tour will delight the gourmet who lives in you.
...  More
From
US$79.15
From
US$79.15
Learn More

Day Tour of Lyon. See both Lyons famous hills in a day. English Guide.See the most interesting sights of Lyon's Old Town plus Croix Rousse.See the last Lyon Silk Shop producing in Lyon.
...  More
From
US$113.56
From
US$113.56
Learn More

145
10:00 am/English | On this guided walking tour of the historic neighborhoods of Croix-Rousse and Vieux Lyon, you will learn a lot about the culture and history of Lyon. We start on Place des Terreauxwhere you'll see the impressive the Hôtel de Ville and Museum. The Bartholdi Fountain is another highlight. Then we walk through Croix-Rousse, where the silk workers used to work. It is filled with hidden passageways, the Traboules. We will talk about silk enjoy amazing views over the city. From the Roman Amphitheatre, we descend down towards Vieux Lyon, the most famous neighborhood of the city. We will see the Fresque des Lyonnais, an impressive wall painting and Rue Juiverie, with the amazing Gallerie Philibert Delorme. We'll finish in the busy part of Vieux Lyon, right in time for lunch! Tips are greatly appreciated. Our guides spend many hours of personal time increasing their knowledge to provide you with the best experience possible. Typical tip range has been e5-10 per person.
...  More
From
US$3.52
From
US$3.52
Learn More

Discover Lyon through its hills

1
I propose to discover the hills of Lyon, known as Fourviere and Croix-Rousse. Both are located near the center of the city and occupy a very important place in the history, culture and identity of the Rhone city.
...  More
From
US$43.59
From
US$43.59
Learn More

Luxury tour abour silk, major industry in Lyon history. From the Croix-Rousse with its traboules till wokrshops in Vieux-Lyon, you will meet passionate artisans who will show you the Jacquard loom, the bombyx moths, the softness of velvet scarfs ... Many surpriiiiises between chemistry, techniques, history, fashion, zoology, with one of the last Made in France firms.
...  More
From
US$168.76
Price varies by group size
From
US$168.76
Price varies by group size
Learn More

6
Ride en plein aire past top Lyon attractions on a private tour via electric tuk tuk. Choose between a 1- or 2-hour circuit that takes you past essential Lyon sights such as Place Bellecour and Parc de la Tête d'or while your guide provides insight into the attractions’ history. Tour includes heated seats and covers for cool weather.
...  More
From
US$91.77
per group
From
US$91.77
per group
Learn More

Running is one of the best ways to see a city! Not only will you see some of the most exciting places in Lyon in around 90 minutes, but you'll also discover the secret paths that wind through the city. These stunning trails bridge Roman architecture with modern street art (and they will keep your heart rate up!) Meet me at the Tête d'Or for dynamic stretching & core before crossing the Rhône River into the Croix Rousse, through Vieux Lyon, and up a lesser-known path to the Fourvière. We will finish at the top of the city for stretching, energy bars, and unbelievable views! In total we will run appx 5k (3.1miles) with a 200m elevation change (appx 670ft). This will be an average pace (14km/minute), with some room for faster or slower runners! I'm a fitness & running coach with 10-years of experience in the USA, most recently as a leading instructor at San Francisco's Equinox Sports Club- a leading institution for results-based fitness. I can't wait to share my passion with you!
...  More
From
US$41.18
Price varies by group size
From
US$41.18
Price varies by group size
Learn More

Discover the best of the lyonnaise gastronomy while visiting the charming Croix-Rousse district, famous for silk Weaving. Accompanied by your guide, learn all about the unusual history of this authentic district, with its unique atmosphere, like a village in the city. Taste the iconic regional specialties and learn about their secrets. In a fun and convivial atmosphere, this tour off the beaten tracks, is perfect to learn about the history and little anecdotes around the city. Charcuterie, cheese, wine and even chocolate, this tour will delight the gourmet who lives in you.
...  More
From
US$516.19
per group
From
US$516.19
per group
Learn More

Private driver and guide in Lyon

Discovery Tour on an electrical bike 2h00 The 2 hills

3
Explore Lyon with ease on an electric bike. After a brief safety training, hop on your bike and begin your 2-hill circuit. Visit the Old Town, banks of the Saône River, Roman theater, Notre Dame de Fourvière Basilica, Terreaux Square, Croix-Russe district, and more. Take in stunning hilltop views and discover Lyon’s distinctive “traboules,” the passageways connecting historic buildings.
...  More
From
US$45.88
From
US$45.88
Learn More

Art and Culture in Lyon with a Local

This Experience is provided by a private local. You always wanted to discover another facette of the old capital of Gaule? Thousands of art lovers from all over the globe visit Lyon each year, either participating in one or more of the numerous cultural events or simply enjoying the buzzing community and the city ambience. Whether you are visiting Lyon as a returning tourist who wants to get to know the city a bit better or it is your first time, this Experience is for you! While walking the streets of Lyon and looking at amazing street art or getting to know more about the city’s galleries and museums, you will hear about artists and street-art artists and their connection to Lyon. I will share with you the most significant cultural and historical insights and details of the colourful and multi-faced Lyon while we deep dive into the world of art and culture of my city and country.
...  More
From
US$27.53
From
US$27.53
Learn More

Things to do near Lyon