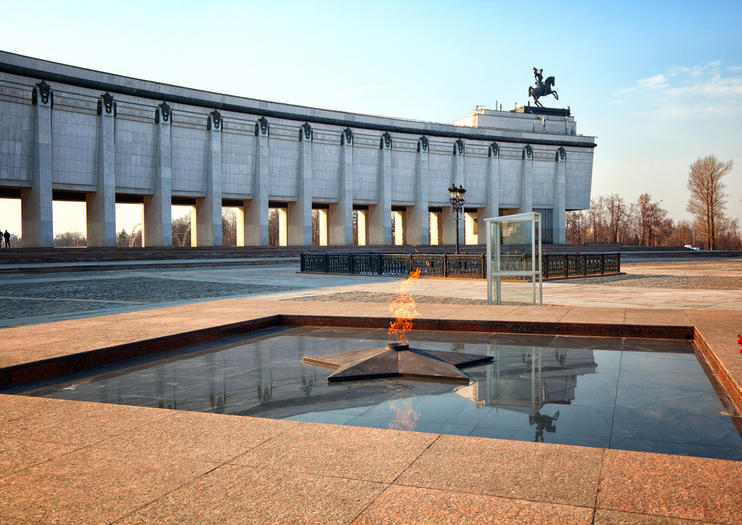 Encircled by poignant monuments and memorials, the Victory Museum—or the Museum of the Great Patriotic War—is the focal point of Moscow’s Victory Park (Park Pobedy). Opened in 1995 to mark the 50th anniversary of the end of World War II, it’s Russia’s largest and most important museum of military history.

The Basics
Spread over four floors, the museum includes a main exhibition hall detailing the events of World War II, six large-scale dioramas showing major WWII battles, and an enormous permanent collection that includes military memorabilia, uniforms, weapons, letters, and personal effects. There are also multimedia exhibits, including a 3D depiction of the Battle of Berlin; a full-dome video projection; and the moving Hall of Glory memorial. The museum’s open-air exhibition of military hardware includes armored vehicles and artillery captured from Japanese and German troops.

How to Get There
Victory Park is located in Park Pobedy, 9.5 miles (15 kilometers) west of downtown Moscow. Take the metro to Park Pobedy station (lines 3 and 8A), then explore the vast park on foot, or take advantage of the free transfer service that runs between the station and the Victory Museum (weekends and holidays only).

When to Get There
The museum is open daily except Mondays, but it’s possible to visit Victory Park and monuments at any time. The park is a popular spot for open-air concerts and events, especially on summer weekends and holidays. The most atmospheric time to visit is on Victory Day (May 9), when huge crowds gather to pay their respects, leave flowers by the memorials, and enjoy free festivities including a fireworks display.

Victory Park
Victory Park is a large-scale tribute to the Russian soldiers who fought and died in WWII and to the sacrifice of the Soviet people.The five terraces symbolize the five years of war, surrounded by 225 fountains to mark the weeks. The park’s centerpiece is the towering Victory Monument, near the Grave of the Unknown Soldier with its eternal flame and Memory Hall, which is home to the Book of Remembrance. A series of memorials commemorate soldiers wounded in war, the Allied forces, and the victims of the Holocaust.
Address: Ploshchad' Pobedy, 3, Moscow 121170, Russia
Admission: Varies
Read MoreShow Less
Admission Tickets (1)

The Museum of Victory Admission Ticket

2
Save time and guarantee entrance to Moscow's Central Museum of the Great Patriotic War of 1941-1945 by pre-booking your admission ticket. Through displays and exhibitions, learn all about Russia's role in the Great Patriotic War (WWII), the battles they fought and many lives that were lost.
…More
From
US$12.43
From
US$12.43
Face masks required for travelers in public areas
Hand sanitizer available to travelers and staff
Social distancing enforced throughout experience
Learn More
Taking safety measures

The Museum of Victory Admission Ticket

2
Save time and guarantee entrance to Moscow's Central Museum of the Great Patriotic War of 1941-1945 by pre-booking your admission ticket. Through displays and exhibitions, learn all about Russia's role in the Great Patriotic War (WWII), the battles they fought and many lives that were lost.
…More
From
US$12.43
From
US$12.43
Face masks required for travelers in public areas
Hand sanitizer available to travelers and staff
Social distancing enforced throughout experience
Learn More
Taking safety measures

Russian Empire and the USSR: Victory Museum and Arkhangelskoye

1
Tour lesser-known attractions in Moscow with a friendly local guide. You’ll visit a couple of important sites that will give you a good introduction to and overview of Russian history: the Victory Museum and Arkhangelskoye, a former royal residence. These sites are off the beaten tourist circuit, so are ideal destinations for travelers who want to see something different in Moscow.
…More
From
US$121.17
per group
From
US$121.17
per group

17
Benefit from personalized attention and a flexible itinerary during this private tour of Moscow's highlights over the course of three days. Booking ahead helps you avoid sold-out days at the Kremlin and the Armory, where tickets often sell out months in advance during the months of April through October. Each day includes a 5-hour tour with a private guide and transportation, covering the city's highlights but still giving you time to explore on your own.
…More
From
US$447.00
per group
From
US$447.00
per group
Face masks required for travelers in public areas
Face masks required for guides in public areas
Hand sanitizer available to travelers and staff
Learn More
Taking safety measures

★ You literally feel with your skin the war and the universal joy of victory ... ★ Wars have hardened Russia and made it what it is, including the inhabitants of this land. The memory of wars is woven into the DNA of a Russian person, which is reflected in his lifestyle, in his character. In this interactive tour, you will immerse yourself in the events of the last warriors of our time: The Second World War and the Cold War. ... ★ THE MILITARY TOUR IN MOSCOW takes place in an interactive format and includes a visit to the declassified nuclear bunker in 2006, which is currently a cold war museum, Victory Park, as well as a visit to the Central Museum of the Great Patriotic War. This tour will be of interest to all Russian guests interested in world history and military battles. ... ★ NOTES: This day tour is valid all year except Monday. ... ★ ATTENTION: This tour is for individual groups. The cost of the tour per person depends on how many people are in your group. ... ★ COMFORT: ★★★★☆
…More
From
US$275.60
Price varies by group size
From
US$275.60
Price varies by group size

Things to do near Moscow