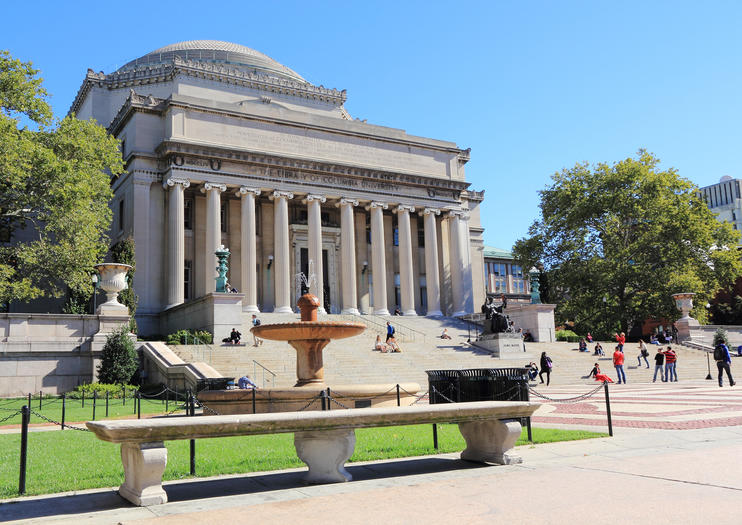 One of the most esteemed institutes of higher learning in the United States, Columbia was established in 1754 as King’s College. Today, the Ivy League university continues to be celebrated for its academic reputation and striking architecture. And if the campus looks familiar, you may have seen it in a Hollywood blockbuster or two.

The Basics
Located amid the skyscrapers and bustle of Manhattan, Columbia University is home to a surprisingly sheltered and classic college campus complete with green quads and eye-catching architecture, including several National Historic Landmarks. Highlights include Low Memorial Library (recognizable by its neoclassical dome), Butler Library (inscribed with the names of luminaries such as Aristotle and Shakespeare), and Pupin Hall (associated with the Manhattan Project). And be sure to look out for filming locations—the campus has appeared in dozens of movies, from Ghostbusters to Spider-Man.

Wander around campus on your own, or go with a guide for additional insight. Columbia is featured on numerous New York City tours, from Harlem and Upper West Side neighborhood excursions to bike jaunts and architecture-themed itineraries.

How to Get There
Take subway line 1 to 116th and Broadway station. Columbia is also served by numerous bus lines (including the M60, which connects the university to LaGuardia Airport).

When to Get There
Columbia’s campus is free and open to visitors throughout the year, though entry to student buildings is generally prohibited unless you’re on a tour. In early winter, don’t miss the university’s festive tree lighting ceremony on College Walk.

Nearby Attractions
Following your campus tour, take the opportunity to explore a few other highlights in the surrounding neighborhood of Morningside Heights. Visit the Cathedral of St. John the Divine, one of the world’s largest Anglican churches; take a walk in scenic Morningside Park or Riverside Park; grab a bite at Tom’s Diner, of Seinfeld fame. Or, head to nearby Harlem to see the Apollo Theater and other neighborhood attractions.
Address: 116th St & Broadway, New York City, New York 10027, USA
Read MoreShow Less

236
See New York City’s breathtaking skyline and the many iconic sights of the city on this helicopter flight. Soar over the Big Apple with an exclusive sightseeing tour of the Manhattan skyline and beyond, including the Empire State Building, the Chrysler Building, One World Trade Center and Central Park, to name just a few, plus Ellis Island, the Statue of Liberty and much more. Then continue up the Hudson River to see even more of Manhattan. A variety of departure times are available throughout the day to fit into almost any schedule.
…More
From
US$284.00
From
US$284.00
Face masks required for travelers in public areas
Face masks required for guides in public areas
Face masks provided for travelers
Learn More
Taking safety measures

123
See New York City’s breathtaking skyline and the many iconic sights of the city on this helicopter flight. Soar over the Big Apple with an exclusive sightseeing tour of the Manhattan skyline and beyond, including the Empire State Building, the Chrysler Building, One World Trade Center, and Central Park, to name just a few, plus Ellis Island, the Statue of Liberty and much more. Then continue to see Brooklyn, Staten Island and more. A variety of departure times are available throughout the day to fit into almost any schedule.
…More
From
US$374.00
From
US$374.00
Face masks required for travelers in public areas
Face masks required for guides in public areas
Face masks provided for travelers
Learn More
Taking safety measures

17
Experience the rich cultural legacy of Harlem and the soul-stilling rhythms of gospel on an immersive Sunday morning tour. Travel through the northern Manhattan neighborhood with a guide while learning about the history of the area and its landmarks like the Apollo Theater, Sugar Hill and Columbia University. Then, join a local Baptist congregation for a Sunday service featuring the exuberant vocals of a live gospel choir.
…More
From
US$65.00
From
US$65.00

11
Get an in-depth look at the thriving culture of Harlem during this 4-hour sightseeing excursion including the chance to attend a Gospel mass at a local church. Learn about Harlem’s religious side by attending a Gospel mass and touring the famous St. John the Divine church. You’ll also explore Harlem landmarks like the Apollo Theater, Sylvia’s restaurant, and much more.
…More
From
US$59.00
From
US$59.00

Experience some of New York City’s less touristy corners with this two-wheeled excursion in Harlem and the Bronx. Embark on a 25 mile journey from 129th Street and enjoy activities that include exploring Manhattan’s historic black neighborhood, cruising by the Bronx Zoo, marveling at Alexander Hamilton’s home, capturing memorable photos of the Apollo Theater, and checking out the Edgar Allan Poe Cottage.
…More
From
US$136.54
From
US$136.54

Take a break from central Manhattan to explore the outer limits of New York City, from Harlem to Brooklyn. Throughout the day you enjoy a private guide and chauffeur service in an air-conditioned vehicle, which eliminates the hassle of taking public transit or navigating on your own. See landmarks and points of interest often missed by visitors, including the oldest bar in Queens and a crafts market in Williamsburg.
…More
From
US$1,253.34
per group
From
US$1,253.34
per group

You only have limited time to explore Manhattan but don’t want to see it from behind the glass of a bus. On this e-bike tour, be part of the urban bustle as you cruise the varied terrain of Central Park and the hills of Morningside Heights with ease. See Bethesda Terrace, browse the kosher goods at Zabar’s, and hear about the history of the Apollo Theater in Harlem.
…More
From
US$90.00
From
US$90.00

3
Combine exercise with sightseeing and look beyond New York’s main tourist sites on this small-group Harlem and Bronx bike tour. Pedal through tucked-away neighborhoods and parks—seeing parts of the city hard to access by bus or train. Hear insight from your guide over the 25-mile (40-kilometer) route, spot places to revisit later, and leave with a deeper knowledge of New York than you’d likely get on foot by yourself.
…More
From
US$128.00
From
US$128.00

16
Explore the best of Uptown New York City on this narrated, hop-on hop-off, double-decker bus tour. Visit many of Upper Manhattan’s top attractions and locations — like the historic neighborhood of Harlem, the Metropolitan Museum of Art, Columbia University and the Apollo Theater, just to name a few. Select the day pass, then board at any of the stops and get to know the sights and sounds of Uptown Manhattan in customized fashion, with live onboard commentary from a professional tour conductor.
…More
From
US$40.00
From
US$40.00
Face masks required for travelers in public areas
Face masks provided for travelers
Hand sanitizer available to travelers and staff
Learn More
Taking safety measures

1
Visit Harlem’s most important historical, cultural and artistic sites on a guided, 3-hour walking tour through one of New York City’s most fascinating neighborhoods. See the distinctive architecture of Columbia University and the Cathedral of St. John, then join the crowds for a leisurely stroll up 125th Street. Follow in the footsteps of Americas most celebrated performers at the Apollo Theater and see a historic Baptist church. Finish your tour at ‘Striver’s Row,’ an elegant cluster of townhouses in a neighborhood that was at the heart of the Harlem renaissance.
…More
From
US$90.67
From
US$90.67