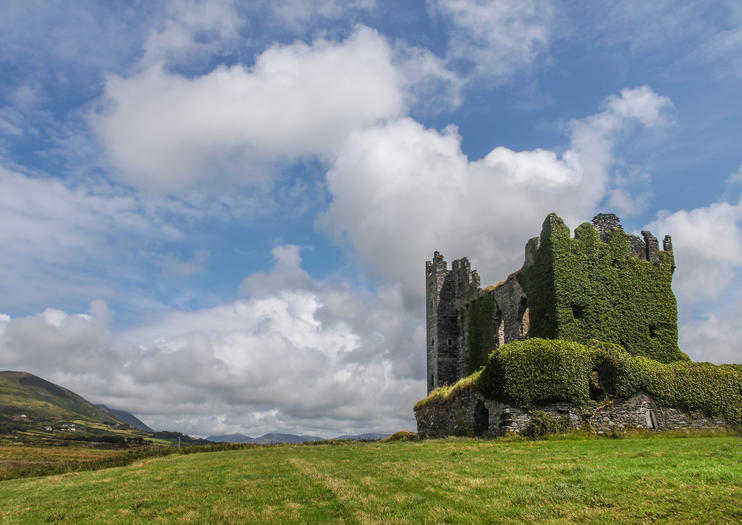 Set atop a grassy pasture overlooking the Atlantic Ocean, this crumbling, ivy-covered castle is one of Ireland’s most romantic ruins. The castle, which originally dates back to the 16th century, was damaged during the 17th-century War of the Three Kingdoms. Now, only parts of the structure, such as its high stone walls, remain in place.
The Basics
The castle is relatively undiscovered and is often overlooked by tourists exploring the Ring of Kerry. As the castle is situated on private land and the ruins are somewhat unstable, Ballycarbery is not open to the public. Visitors can, however, park in a nearby lot, where some background information on the castle is provided. Admire the structure from afar, and take photos of the picturesque ruin. Some private Ring of Kerry day tours do make photo stops at the evocative site.
Things to Know Before You Go
How to Get There
Ballycarbery Castle is about 2 miles (3 kilometers) from Cahersiveen, County Kerry in an area locals call “over the water.” From Cahersiveen, follow Castlequin Road and then turn left when you see the sign for Ballycarbery Castle. Driving here involves navigating narrow country roads, so you may prefer to go as part of a guided tour.
When to Get There
Because of its off-the-beaten-path setting and the lack of public access, Ballycarbery Castle is rarely busy. Even in peak summer season, there’s a good chance you’ll be the only sightseer photographing the structure.
Historic Attractions on the Ring of Kerry
Other historical attractions situated not far from Ballycarbery Castle include Leacanabuaile Fort and Cahergall Fort; these ancient stone forts are less than 5 minutes away from the castle ruins by car. The castle is also just a short drive from Valentia Island, home to the Skellig Experience Visitor Centre, and the Daniel O'Connell Memorial Church in Cahersiveen, which is named after the 19th-century Irish political leader and campaigner for Catholic emancipation.
Address: Cahersiveen, Ring of Kerry, Ireland
Read MoreShow Less

3
Choose your own route through the Emerald Isle and hit the highlights you want to see on this private Ring of Kerry tour from Cahersiveen. Explore the Iveragh Peninsula with your private guide and discover top landmarks such as Ballycarbery Castle, Cromwell's Bridge, Ross Castle, the Skellig Ring, the Stone Circle and the Torc Waterfalls. Marvel at the medieval fortifications of Cahergall and Leacanabuiaile, and pass through quaint towns such as Kenmare and Waterville. Take the Coomakista Pass for spectacular views, and enjoy the freedom to stop wherever you’d like.
...  More
From
US$84.79
From
US$84.79
Learn More

Ring of Kerry Private Tour from Sneem and Parknasilla

1
Discover top attractions and hidden jewels on the Emerald Isle on this private Ring of Kerry tour from Sneem and Parknasilla. Delve into the beautiful Iveragh Peninsula with your private guide. Take in top landmarks such as the medieval fortresses of Cahergall and Leacanabuiaile, the Torc Waterfalls, Ballycarbery Castle and Cromwell's Bridge. Explore pretty villages like Cahersiveen, Killorglin and Sneem and enjoy a pace of life far removed from the city. During your private tour, stop where you like and make the most of your time on Ireland’s Iveragh Peninsula.
...  More
From
US$84.79
From
US$84.79
Learn More

3
Marvel at some of Ireland’s most beautiful landscapes on this private Ring of Kerry tour from Killorglin. Head deep into the Iveragh Peninsula with your private guide and discover famous landmarks including Cahergall Fort, Leacanabuiaile Fort and Ballycarbery Castle. Pass through quaint villages such as Kenmare, Sneem and Waterville, and enjoy an altogether more relaxed pace of life in the Irish countryside. Admire top attractions like the Torc Waterfalls and Cromwell's Bridge, and enjoy the freedom to plan your own route with your private guide.
...  More
From
US$84.79
From
US$84.79
Learn More

More Tours in Ring of Kerry

Things to do near Ring of Kerry