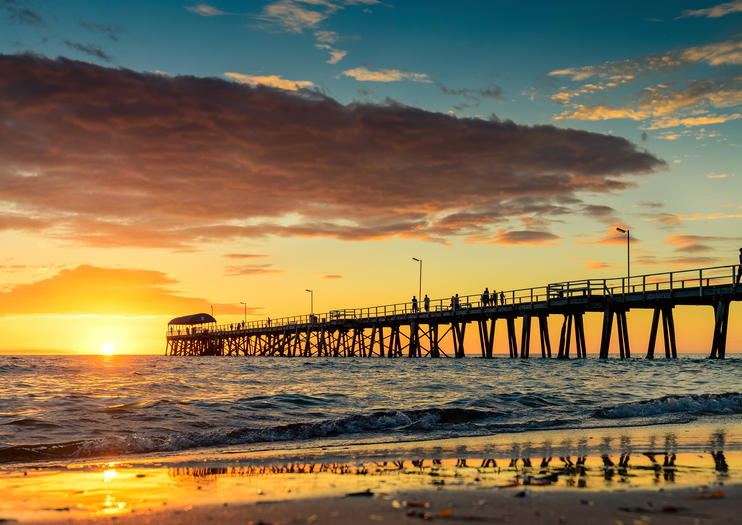 Just 7 miles (11 kilometers) from downtown Adelaide, the seaside suburb of Henley Beach offers more than just a long, safe, sandy beach and scenic jetty. Feast at the area’s spectacular seafood restaurants; paddle, swim, or fish at the beach; hike or bike along the coast; or watch the sun set over the Southern Ocean.

The Basics
Alongside Glenelg, Henley Beach is one of the top beach escapes from Adelaide, with a selection of hotels and holiday rentals and a range of cafés and restaurants. Some travelers choose to base themselves here, while others explore independently or on tours from Adelaide. Experiences on offer run from stand-up paddleboarding to kayaking, from fishing to crabbing, from bicycle tours to coastal strolls, as well as the time-honored traditions of swimming and sunbathing.

How to Get There
Henley Beach sprawls along the coast 7 miles (11 kilometers) west of downtown Adelaide, between Glenelg and Semaphore. Buses include the H30 and N30, which stop on North Terrace (east side), Currie Street, and Grenfell Street within Adelaide city center. Alternatively, walk or cycle the accessible River Torrens Linear Park Trail, which follows the River Torrens (Karrawirra Parri) from downtown Adelaide.

When to Get There
Sunset is a particularly magical time to visit Henley Beach, with the jetty framed against the apparently endless ocean and a wealth of seafood options for dinner. Particularly over the Australian summer school vacation, which peaks in late December and January, midweek is a better time to visit than weekends.

How Henley Beach Got Its Name
Like many other Australian settlements, Henley Beach takes its name from a town in England, specifically the riverside town of Henley-on-Thames. Many believe it was a judge named Charles Cooper, born in Henley-on-Thames, who suggested the name to the explorer Charles Sturt, a fellow Briton who lived locally. The beach was a major part of Henley’s appeal from early on, with the first hotel opening in the 1870s.
Address: Henley Beach, Adelaide 5022, Australia
Read MoreShow Less

11
Maximize your time in Adelaide and experience sights that many tourists miss on a bike ride between the city and the sea. At a relaxed pace, you’ll cycle to the vibrant Riverside Precinct and visit Henley Beach for morning brunch. Pedal along the River Torrens Linear trail and parallel to the south Australian coastline, a visual feast of white sand beaches. Finally, explore Glenelg town and opt to return to Adelaide by tour bus or on the iconic Glenelg tram. Small-group tour, limited to eight people.
…More
From
US$101.00
From
US$101.00
Hand sanitizer available to travelers and staff
Social distancing enforced throughout experience
Regularly sanitized high-traffic areas
Learn More
Taking safety measures