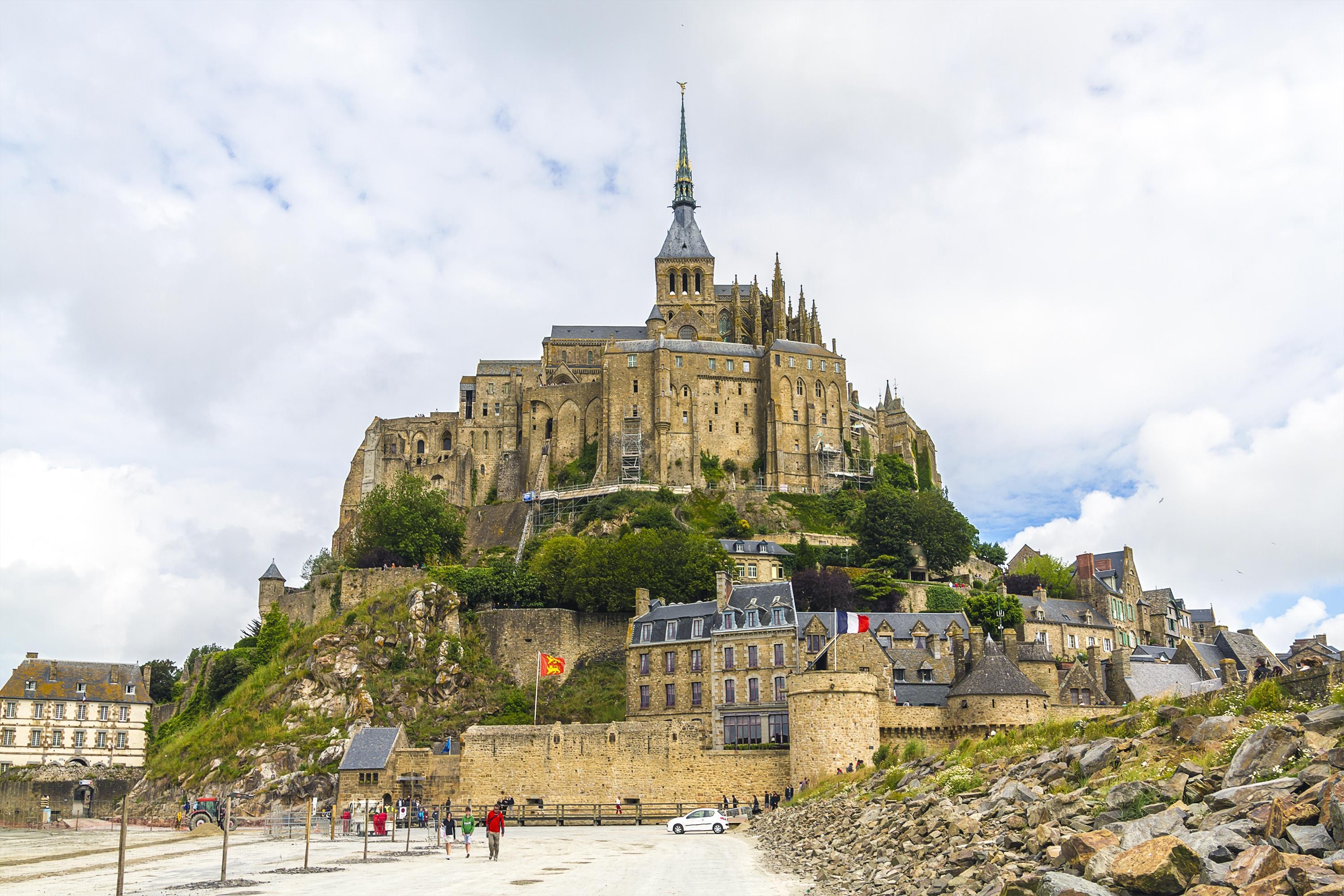 The first Norman king of England left a grand legacy in Caen, from the ramparts of Caen Castle to the former Benedictine monastery where William the Conqueror is buried. To explore William the Conqueror’s Caen in Normandy and glimpse a fascinating time when battles, rebellions, and treaties transformed Europe, visit these medieval sites.

Take a stroll on the ramparts of Caen Castle, which William the Conqueror built in 1060, for kingly views of Caen and the surrounding French countryside. The fortified castle now houses the Normandy Museum (Musée de Normandie) and Museum of Fine Arts (Musée des Beaux Arts), so it’s easy to spend an entire day exploring the grounds.

Pay your respects to Queen Matilda, William the Conqueror’s wife, at the Benedictine monastery that she founded—she's buried here under an imposing slab of black marble. Though the abbey has seen hundreds of years of tumult and change, it’s been restored to its former glory. Spot vaults in the cloister gallery, descend into the crypt, and join a guided tour to unlock nearly 1,000 years of history.

A monk’s counterpart to the Abbaye aux Dames, this Romanesque masterpiece houses William the Conqueror’s tomb. Though it’s possible to buy tickets for an independent visit, some areas— including the king’s tomb—are only open to visitors on a guided tour. And don’t rush off when the visit concludes, since the abbey’s peaceful gardens are the perfect spot to stroll following your visit.

Follow the hand-stitched story of William the Conqueror’s most famous exploit at the nearby town of Bayeux, 19 miles (30 kilometers) from Caen. The 230-foot (70-meter) embroidered cloth depicting the Norman conquest of England is full of vivid detail that draws you into the battles of 1066. The tapestry is a highlight of Normandy, and a stop that’s included on many guided tours of the area.

3 Tours and Activities | All Caen Tours

8
Delve into Normandy's superb historical and culinary heritage on a private tour from Bayeux. Begin with a visit to Bayeux Cathedral and the iconic Bayeux Taperstry illustrating the story of William the Conqueror. Next continue onto Honfleur, a waterfront town that's filled with timber-framed houses and France's largest wooden church. It's colorful scenery was a favorite among Impressionist painters like Monet. Finally, save your appetite for Pays d' Auge, where you'll sample regional food and drink specialities like Cavados brandy and Camembert cheese.
…More
From
US$831.99
Price varies by group size
From
US$831.99
Price varies by group size

Embark on a historical and cultural tour of Normandy on a day trip from Caen. An experienced guide accompanies you on this private day-long tour, which includes visits to both Rouen and Giverny. In Rouen you'll see the famous square where Joan of Arc was executed, and marvel at Rouen Cathedral's towering spire—the highest in France. In Giverny tour the former home and gardens of artist Claude Monet (own expense), where you can practically see his paintings come to life. This tour can be customized to suit your needs.
…More
From
US$907.62
Price varies by group size
From
US$907.62
Price varies by group size

Delve into Normandy's vast and often turbulent history on a private day tour through the region. Depart from Caen to Bayeux—home to the impressive Bayeux Tapestry, which illustrates (literally) the Battle of Hastings. Then head to Honfleur, a lovely port town sporting colorful timber homes and a favorite haunt of Impressionist painters. See France's largest wooden church before stopping in Pays d' Auge. Here you have a chance to sample regional delicacies such as Camembert cheese and Calvados brandy. Cider is also ubiquitous to the area.
…More
From
US$907.62
Price varies by group size
From
US$907.62
Price varies by group size