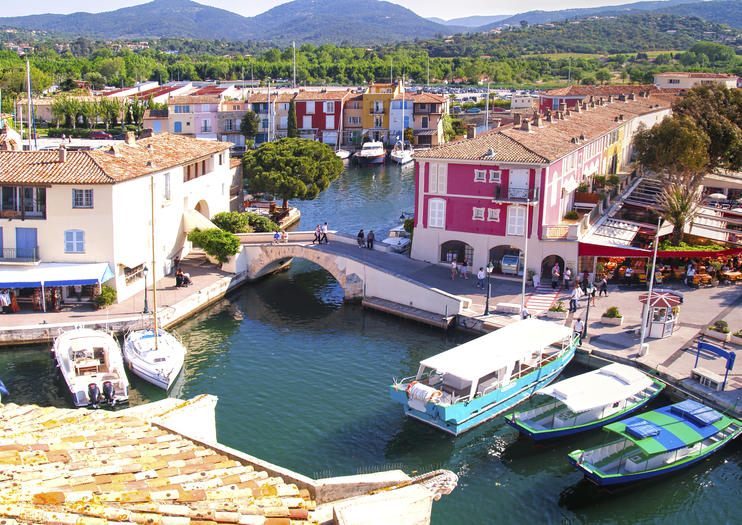 Just along the coast from St. Tropez, Port Grimaud is a chic village purpose-built in the 1960s by architect François Spoerry. The town was designed to resemble a mini Venice with its network of canals and brightly painted buildings, and today it is a popular destination for visitors to the Côte d’Azur.
The Basics
Port Grimaud is a unique place, arranged over four islands surrounded by canals and connected by bridges—hence it being known as the Venice of Provence. The whole village was designed and built in the 1960s on former marshland west of the glamorous town of St. Tropez. The majority of homes are simple in structure and resemble the traditional fisherman’s cottages of the area.
The virtually traffic-free village attracted controversy for being a “fake” version of a Provencal town when it was first built, but now it’s a popular destination for both homeowners and visitors. The modernist church dedicated to St. Francis of Assisi, with stained glass by Victor Vasarely, is on most people’s must-do list, as is a boat trip along the canals to see the many different watercraft—every house in town has its own private mooring.
For many travelers, Port Grimaud—often as part of a small-group or private guided tour out of Nice, Cannes, Monaco, or St. Tropez—is a highlight of their Provence visit.
Things to Know Before You Go
How to Get There
Port Grimaud lies along the Côte d’Azur, 7 miles (12 kilometers) southwest of St. Tropez. The closest airport is in Nice, 55 miles (88 kilometers) away. Cars are not permitted inside the town and must park on the outskirts. You can use local water buses to get around town, or explore with a guided tour.
When to Get There
Port Grimaud is lovely year-round, although it’s busiest during the summer months. Opening times differ for the different stores, cafés, and restaurants in town.
Stroll the Streets in St. Tropez
Known the world over as a favorite vacation spot for the rich and famous, the French Riviera town of St. Tropez has everything you could want for a day on the Côte d’Azur—gleaming white superyachts, very chic boutiques, stylish beach clubs, and bistros offering glasses of ice-cold rosé with stunning Mediterranean views.
Address: Port Grimaud, France
Read MoreShow Less

Things to do near Cannes