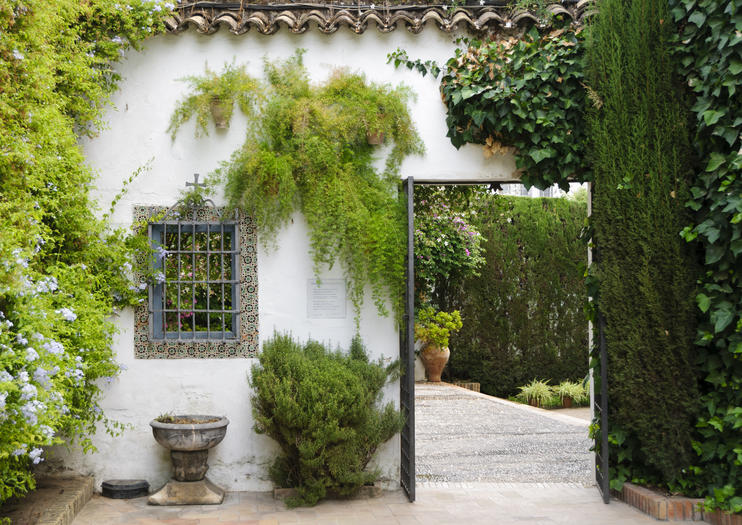 Cordoba has become synonymous with courtyards, and Viana Palace offers a stunning look at these famous southern patios. Also called the Museum of Patios, the Renaissance palace is home to 12 courtyards as well as centuries of history. It was originally built in the 14th century and was lived in, enlarged, and modified until the 1900s.

The Basics
Its courtyards give Viana Palace (Palacio de Viana) its fame and make it especially representative of its home city. The patios, especially common in Cordoba, are influenced by Roman and Arabic tradition, and are defined by their central location within the interior of homes and buildings. For centuries they have served as the heart of family and social life and provided a cool respite from the summer heat, thanks to their shade and abundant plants and fountains.

At Viana Palace, expect to find some of Cordoba’s most luxurious patios, filled with gardens, bubbling fountains, and pebbly mosaic-filled flooring. Beyond its lavish courtyards, a palace visit also allows you to peruse its interior, which includes salons filled with frescoes, a 7,000-book library, and Flemish tapestries, among other treasures. It also provides a unique look at an evolution of architectural influence, decor, and aristocratic life.

When to Get There
The palace hours differ throughout the year, as does its schedule of concerts and events; check online. The most colorful blooms occur in the spring, summer, and early autumn. Cordoba is particularly lovely during the city’s Courtyards Festival, held during the first two weeks of May, when homeowners open their blooming courtyards to the public.

Tablao El Cardenal
Don’t miss a flamenco performance at the 25-year-old Tablao El Cardenal, which is located close to the Mezquita in the city’s Jewish Quarter. This renowned venue features shows in its indoor auditorium in the fall and winter, and in its own courtyard during spring and summer. Many consider the theater to be the best place in the city to watch this traditional Spanish dance form, which allegedly originated in Cordoba.
Address: Plaza de Don Gome, 2, Cordoba 14001, Spain
Admission: Varies
Read MoreShow Less

82
Enhance your sightseeing experience of Cordoba on a comprehensive hop-on hop-off City Sightseeing tour of the city. Cruise past premier Cordoba attractions like the magnificent Mezquita, the Alcazar, and the Roman Temple of Cordoba, and disembark whenever a landmark captures your attention. After exploring the attraction further, return to your sightseeing route at any of the conveniently located stops and continue exploring the city by double-decker bus. Opt to enjoy a validity period of one or two days with this convenient and cost-effective tour.
…More
From
US$23.89
From
US$23.89
Hand sanitizer available to travelers and staff
Social distancing enforced throughout experience
Regularly sanitized high-traffic areas
Learn More
Taking safety measures

15
On this bike tour through Cordoba, you visit the most beautiful places in the city. Of course you see the Mezquita, the Jewish quarter, squares, and patios. This beautiful city is very bicycle friendly and that makes cycling in Cordoba very nice. You should not miss this bike tour if you want to learn more about one of the most beautiful and historic cities in the world. Cycling in Cordoba is definitely recommended and suitable for all ages. Additionally, discovering Córdoba in this fun and dynamic manner will not only expose you to the sites that have given it its reputation, but will also provide you with a fabulous sense of orientation in the city and give you valuable information about how to proceed. Learn about where you should eat and what you should see during your stay, as your guide points out the best restaurants, bars, and more.
…More
From
US$33.11
Price varies by group size
From
US$33.11
Price varies by group size
Hand sanitizer available to travelers and staff
Gear/equipment sanitized between use
Learn More
Taking safety measures

Things to do near Cordoba