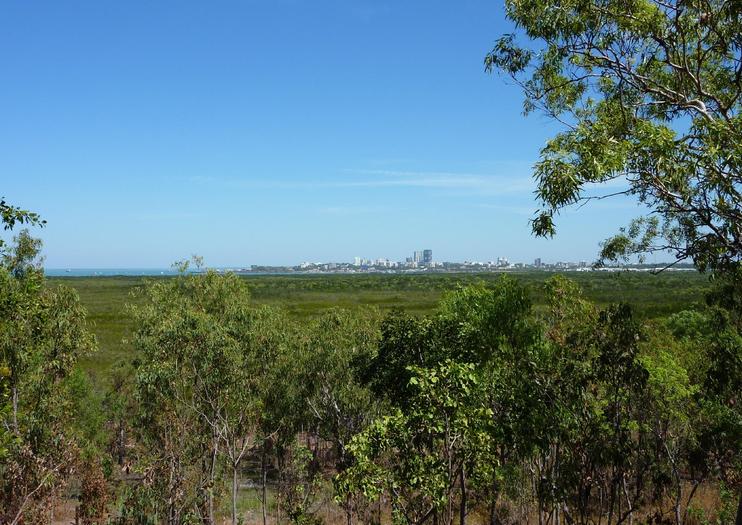 Protecting some of Darwin’s most cultural and historically significant wetlands, Charles Darwin National Park is the home of mangroves and wildlife visible by walking, cycling, or simply sitting at one of the park’s many overlooks. A complex system of bays, waterways, and small islands, 31 of the 50 or so species of mangrove of the Northern Territory can be found here.  Historically the Larrakia people called this area home with evidence suggesting the Aboriginals had inhabited here for thousands of years. Now it’s a wonderful place to take in views of Darwin city, the harbor, and the surrounding landscape.
The park is also home to concrete bunkers and shelters from World War II, which tell the story of Australia’s soldiers and are open to visitors. There is an impressive display of war memorabilia here, where ammunition was once stored and military tests were run. The park’s many paths can be used for both walking and cycling to take it all in.

To get there take Tiger Brennan Drive east from downtown Darwin — there are signs from the highway identifying the park entrance (about 5 km out,) which is only open during daylight hours.
Address: Tiger Brennan Dr, Darwin NT 0820, Australia
Read MoreShow Less

Join a morning city sights tour for the perfect introduction to Darwin, with expert commentary by a local guide. See the lush Botanic Gardens and the Chinese Temple and tour the other historic sites of the city including the Darwin Aviation Museum. Explore the Museum and Art Gallery of the Northern Territory, whose collections encompass Aboriginal art, visual arts, and Northern Territory history and natural sciences. After the tour you will be dropped off in the city for a 45-minute break and opportunity to have lunch. In the afternoon head 60kms from Darwin to Adelaide River, home to over 1600 Crocodiles and the famous Jumping Crocodiles. Cruise the river and thrill as these awesome creatures launch themselves out of the water. The cruise will enable you to see these prehistoric creatures at close range. Afterwards continue to the Window on the Wetlands Visitor Centre for view over the Marrakai Plains and then it’s on to Fogg Dam Nature Reserve to view a wetland ecosystem up close.
…More
From
US$126.27
From
US$126.27
Hand sanitizer available to travelers and staff
Regularly sanitized high-traffic areas
Gear/equipment sanitized between use
Learn More
Taking safety measures

Take a private military history tour in comfort during your time in the Top End. Our accredited local guides all have a passion for Darwin's history, heritage and culture, and they love sharing their knowledge and showcasing their town. Equipped with modern, comfortable air-conditioned vehicles, our guides are able to take you on a journey around Darwin describing the events of that fateful day in 1942 when Darwin was bombed, as well as the broader war history of the town. This private war history tour can be tailored specifically around the interests of guests. Price includes entrance fees to the Darwin Military Museum and the Defense of Darwin Experience, and Charles Darwin National Park.
…More
From
US$477.20
per group
From
US$477.20
per group

4
Explore the ancient history and modern vibrancy of Darwin on a half-day sightseeing tour. Travel by coach and listen as your local guide shares commentary about the tropical city’s natural and cultural attractions. Delve into Aboriginal art at the Museum and Art Gallery of the Northern Territory, and stroll past fragrant orchid blooms at the Botanic Gardens. Upgrade to cap off the day with a sunset cruise through Darwin Harbor while enjoying a fish-and-chip dinner with sparkling wine.
…More
From
US$47.62
From
US$47.62
Hand sanitizer available to travelers and staff
Regularly sanitized high-traffic areas
Gear/equipment sanitized between use
Learn More
Taking safety measures