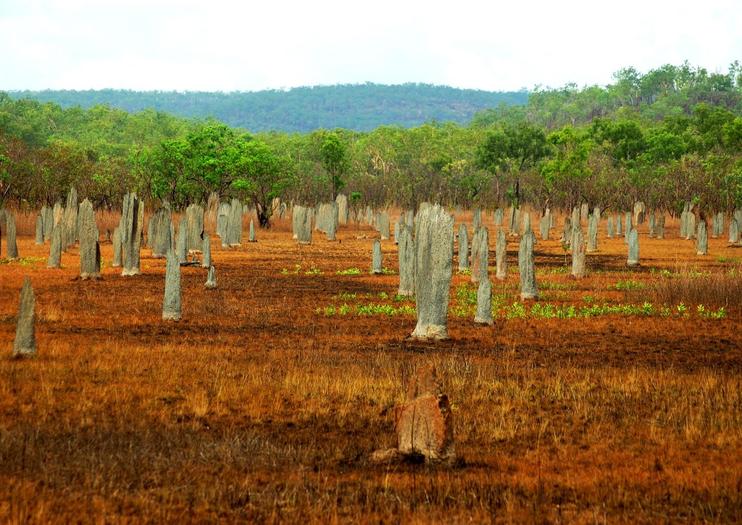 Across fields in northern Australia stand these tall magnetic termite mounds standing up to two meters high. As a habitat created by termites, they’re strategically built to face away from the hot sun and keep temperatures cool. Inside are complex and fascinating architecture and networks of arches, tunnels, chimneys, and various chambers. Thousands of termites live in a single mound and are known to last anywhere from fifty to one hundred years — which can also be the lifespan of one termite queen. Looking at the mounds it’s hard to believe such a small insect could create such a large, elaborate dwelling for itself.
There are several types of termite mounds, and in this case ‘magnetic’ refers to the way they are aligned (in conjunction with the earth’s magnetic field.)  How the termites are able to consistently determine the north-south orientation to avoid the heat is unknown, and these structures remain a bit of a natural phenomenon.

Located in Litchfield National Park, the first grouping of termite mounds can be found 17 kilometers from the eastern boundary of the park. Litchfield is about an hour and a half’s drive from Darwin. The natural sites are free to access.
Address: Litchfield Park Road, Litchfield Park, Litchfield NT 0822, Australia
Read MoreShow Less

128
Explore a landscape of ancient rock formations, monsoon forests, and cascading waterfalls on this full-day tour from Darwin to Litchfield National Park. Marvel at massive termite pillars, take a dip in natural swimming holes, and explore rock pools at the base of the sparkling falls. Enjoy lunch at the Litchfield Café and learn of the Aboriginal legends that surround this pristine landscape.
…More
From
US$135.31
From
US$135.31
Hand sanitizer available to travelers and staff
Regularly sanitized high-traffic areas
Gear/equipment sanitized between use
Learn More
Taking safety measures

126
Explore the tropical wilderness of the Litchfield National Park on this full-day small-group tour from Darwin. Visit the Florence and Wangi Falls; cool off with a dip in the Buley Rockhole, and snap photos of the gigantic Cathedral and Magnetic Termite Mounds. You'll also enjoy a crocodile-spotting cruise along the Adelaide River and hear about the reptiles from the wildlife guide. Includes lunch, snacks, croc cruise, and hotel pickup and drop-off.
…More
From
US$127.35
From
US$127.35
Face masks provided for travelers
Hand sanitizer available to travelers and staff
Social distancing enforced throughout experience
Learn More
Taking safety measures

218
One of the Northern Territory's key attractions is its isolation, but an increasing number of visitors means that the Territory's most popular attractions are becoming very busy. Cruise the Adelaide River without bumping into lots of other groups on this early-morning tour, with the chance to swim in picturesque rock pools and meet a crocodile without a horde of onlookers spoiling the experience.
…More
From
US$115.77
From
US$115.77

251
Spend a day exploring the waterfalls, monsoon forest, and rock formations of Litchfield National Park on a small-group tour from Darwin. Swim in natural rock pools such as Buley Rockhole, admire massive termite pillars, take a guided walk in the forest, hear Aboriginal stories, and learn about Australian plants and animals. Take a dip at waterfalls that cascade from the Tabletop Range, relax over a barbecue lunch and travel by air-conditioned minivan with a knowledgeable guide.
…More
From
US$93.34
From
US$93.34

32
This nine-day off-road camping adventure between Darwin and Broome is the ultimate way to see the rugged outback while somebody else takes care of the transport and logistics. Spend your days hiking, swimming, and spotting wildlife in some of Australia’s most beautiful locations while hanging out with a knowledgeable guide and new friends. Camp in remote spots at night.
…More
From
US$1,446.40
From
US$1,446.40

Enjoy a small-group guided tour of the Litchfield National Park, on day tour from Darwin. Visit the incredible Wangi Falls, Florence Falls and Buley Rockhole where you’ll have a chance to see and swim in stunning waterfalls. (Seasonal weather conditions may apply) See the Magnetic and Cathedral Termite Mounds and hear about their unique role in our Tropical Eco-system.  Enjoy a private group crocodile spotting cruise along the Adelaide River, skippered by our local wildlife expert. Enjoy a delicious lunch and snacks along the way.
…More
From
US$133.86
From
US$133.86
Face masks provided for travelers
Hand sanitizer available to travelers and staff
Social distancing enforced throughout experience
Learn More
Taking safety measures