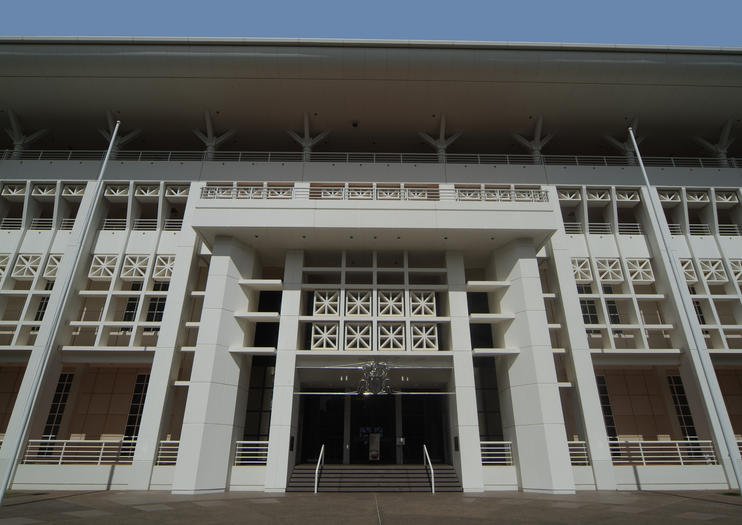 Australia’s newest parliament house was built in Darwin in 1994, and has been the seat of the Northern Territory Legislative Assembly since then. It was designed in a postmodern style and built to suit the tropical climate of Darwin. The entrance features a Northern Territory coat of arms placed at the top of its ceremonial doors.
The building overlooks Darwin Harbor, sitting on the site of the former Post Office and Telegraph Station which were bombed during a raid in 1942. There is a state library, portrait gallery, and a massive Main Hall indoors, and the Speakers Green outdoor. The areas function both as parliamentary and government receptions and public exhibitions. Unique tributes to the symbols of the Northern Territory, such as a desert rose in the reception foyer, are present throughout.

Darwin’s Parliament House is located on Mitchell Street in the State Square at the center of the city. It is open Monday to Friday from 8 am to 4:30 pm, and free guided tours available on Saturday mornings.
Address: Mitchell Street, State Square, Darwin NT 0800, Australia
Read MoreShow Less

6
Go sightseeing in Darwin on a 5-hour morning tour that takes you to top sites including Parliament House, Palmerston Town, the Darwin Botanical Gardens and the vibrant waterfront. Learn about the Darwin’s World War II history at the Defence of Darwin Experience, with admission to this military heritage site included in your tour. Have time to explore the Museum and Art Gallery of the Northern Territory, and stop by the Fannie Bay Gaol and Darwin Aviation Heritage Centre among other sites on this comprehensive introduction to Darwin.
…More
From
US$90.45
From
US$90.45

26
Get an insider’s perspective on the history and culture of Darwin on this walking tour with a local guide. Hear the background stories to the buildings and monuments that you’d miss if you just walked past them alone. There are many opportunities to stop and take pictures of the must-see sights as well as the more peaceful, hidden corners of central Darwin.
…More
From
US$35.45
From
US$35.45
Hand sanitizer available to travelers and staff
Social distancing enforced throughout experience
Gear/equipment sanitized between use
Learn More
Taking safety measures

185
Ride into the sunset and enjoy tropical breezes during this Darwin dinner cruise aboard a traditional fishing ketch. Enjoy freshly shucked Coffin Bay oysters or sink your teeth into succulent Northern Territory Banana prawns followed by your choice of fresh-caught fish or Scotch fillet steak in a 4-course meal provided by the onboard chef. Drinks are available for purchase at the bar, or bring your own.
…More
From
US$86.10
From
US$86.10

4
A specially tailored tour for those with an interest in World War II, this guided tour takes you back in time to the day in 1942 when the war reached mainland Australia and the city of Darwin was bombed. Your guide shares stories from the fateful day as they lead you on a leisurely walk through the historic quarter of the city, past historic buildings dating from that era and through Darwin's streets and gardens.
…More
From
US$35.45
From
US$35.45
Hand sanitizer available to travelers and staff
Social distancing enforced throughout experience
Gear/equipment sanitized between use
Learn More
Taking safety measures