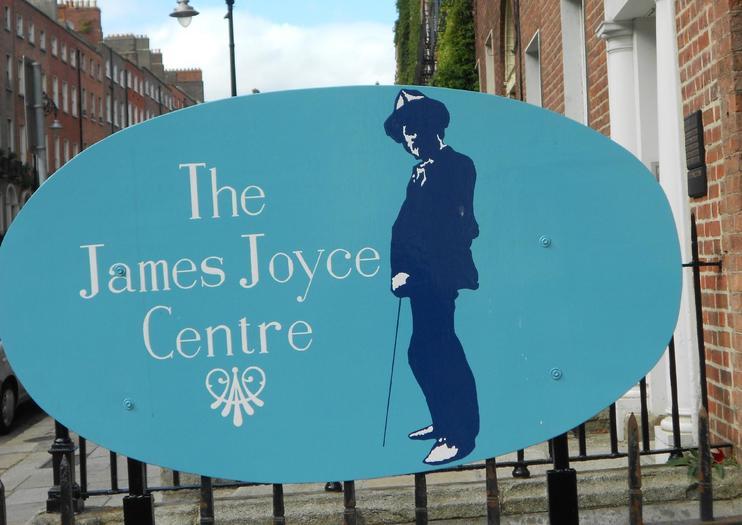 Housed in a meticulously restored Georgian townhouse, the James Joyce Centre museum is devoted to one of Ireland’s greatest literary figures. The house once hosted the dance academy of Denis Maginni, a minor character in Joyce’s Ulysses, and now showcases Joycean artifacts including furniture from his Paris apartment and displays on his life and writings.
The Basics
Visitors can explore the three floors of the 18th-century building with the aid of a free audio tour. Exhibits include the door or 7 Eccles Street, where Ulysses characters Leopold and Molly Bloom lived; a re-creation of Joyce’s study; and documentary films focusing on topics such as the controversy surrounding Ulysses.
The center runs guided walking tours inspired by Dubliners and the movements of Leopold Bloom that cover sights with Joycean connections. Hop-on hop-off tour buses stop at the center, while some sightseeing-pass ticket holders are entitled to free skip-the-line entry.
Things to Know Before You Go
How to Get There
The James Joyce Centre is situated on North Great George’s Street. The Parnell Luas stop, served by the Luas Green Line tram, is just a 2-minute walk away, and several Dublin bus routes stop nearby.
When to Get There
James Joyce Centre is open daily, April–September, and from Tuesday through Sunday, October–March. Tours run more frequently during summer. One of the best times of the year to visit is during the annual Bloomsday festival celebrating Joyce, which takes place June 16 and features special tours, Bloomsday breakfasts, and other events at the center.
Dublin’s Joycean Attractions
Though Joyce left Dublin in his early twenties, the city remained a big inspiration for the writer, featuring heavily in his fiction, from Dubliners to Ulysses. In the seaside suburb of Sandycove, Joyce fans can visit the Joyce Tower and Museum, a Martello tower where Joyce stayed in 1904. Other Joyce-connected sights include the Gresham Hotel on O’Connell Street, which features in the Dubliners short story “The Dead”; Belvedere College, the Jesuit-run secondary school Joyce attended; and Sweny’s, a Victorian-era chemist mentioned in Ulysses.
Address: 35 North Great George’s Street, Dublin, Ireland
Admission: Varies
Read MoreShow Less

329
Design your own ideal (and cost-efficient) tour of Dublin’s top things to do and see with the Dublin Pass and see attractions such as Guinness Storehouse, Jameson Distillery Bow St., and Glasnevin Cemetery Museum. With your single- or multi-day ticket, visit brew houses, museums, castles, cathedrals and more. Explore the city at your leisure on a hop-on hop-off bus sightseeing tour. Enjoy skip-the-line access to popular sites and discounts at city restaurants and shops. With free entry to more than 25 attractions around town, the Dublin Pass offers something for the whole family. Please note: Enjoy the extra flexibility in case your travel plans need to change: All passes are valid for two year from purchase date and only become activated with your first attraction visit. After activation your pass will be valid for 30 days and/or the remaining number of attraction choices purchased.
…More
From
US$83.49
From
US$83.49

3
We will see the non touristic area of Dublin and speak about how this country foought for independence. We pass for very unique places usually avoided by tourists. Experienced tour guides that know very well the city.
…More
From
US$214.86
per group
From
US$214.86
per group
Face masks required for travelers in public areas
Face masks required for guides in public areas
Learn More
Taking safety measures