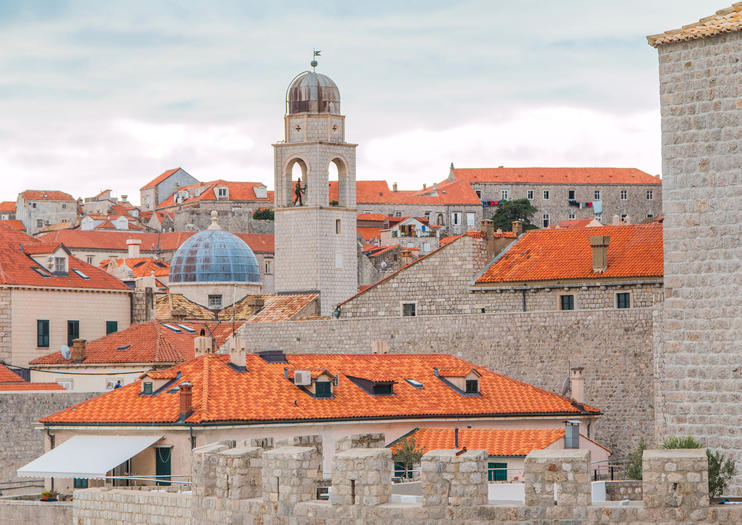 One of the foremost landmarks of Dubrovnik’s atmospheric Old Town, the Dubrovnik Bell Tower stands at the eastern end of Stradun, the main thoroughfare, and looms over Luza Square. The 31-m (102-ft) stone tower is topped with a stumpy dome and flanked by some of Dubrovnik’s most spectacular architecture, including the lovely Sponza Palace, St. Blaise Church and Orlando’s Column. Constructed in 1444, the tower was badly damaged in the earthquake of 1667 and began to lean alarmingly; by the 18th century it had fallen into disrepair and it was not until the late 1920s that repair work began and the tower acquired its present shape and clock, the face of which resembles an octopus and also portrays the phases of the moon. Consequently, very little of the original tower has survived to the present day except the two-tonne bronze bell, which was cast by master metalworker Ivan Krstitelj Rabljanin from nearby Rab Island. The bell is bracketed by two bronze figures – now tinged green with age – known locally as the ‘zelenci’ or the ‘green ones’ and who strike the bell on the hour every hour – their much-restored originals are now on display in the Rector’s Palace along with the original clock mechanism.

118
First-timers, even third timers, should not miss this info-packed walking tour of Dubrovnik. Stroll the limestone-covered streets of Old Town, or Stari Grad, with a knowledgeable guide learning the secrets behind the palaces and plazas, cloisters, and cathedrals. Start the tour in the morning, the best time of day to walk the streets of the city. Go from the clock tower to the Assumption Cathedral, traversing the entire Old Town while learning about the history of the place.
...  More
From
US$21.50
From
US$21.50
Learn More

10
This tour will show you the Old Town through the eyes of a local - all our guides are locals of Dubrovnik and all of us are very passionate about the history of our city. It's not just showing you around and sharing intriguing stories, it's about fully immersing into the life of Dubrovnik people, today and centuries ago! Some of us grew up inside the walls and will gladly show you where we used to play as kids; you'll get to see interesting details and experience Dubrovnik in a whole new way. Think of this not only as a tour but also as a walk with a friendly local. We want this tour to be a personable experience for all our guests - we guarantee small groups. There will never be more than eight guests per guide. We want you to make the most of this, get to know the city, its history and your local guide!
...  More
From
US$28.72
From
US$28.72
Learn More

Dubrovnik, that pearl of the Adriatic, has more going for it than towering medieval walls, limestone-clad streets, and friendly locals. There are some seriously intriguing stories behind the legends of Dubrovnik. This tour takes you, your very own lantern in hand, through the streets of Stari Grad, or Old Town, scratching the surface of the city to learn what has really made it tick for the last several centuries. Explore Dubrovnik in a different and exciting way.
...  More
From
US$36.86
From
US$36.86
Learn More

22
See Croatia in style by island hopping around the Adriatic Sea. This memorable 7-day island-hopping extravaganza of the Dalmatian Coast starts in Dubrovnik, ends in Split and visits a few islands in between. Traverse the islands of Korčula and Hvar, lingering in the ancient villages that are sprinkled around the islands. Learn about the history of each place. Dine on some delicious local dishes. Lounge on the beach and swim in some of the cleanest waters in the Mediterranean. Take walking tours of Dubrovnik, Hvar and Split, plus get hotel accommodation and airport transfers.
...  More
From
US$1,025.63
From
US$1,025.63
Learn More