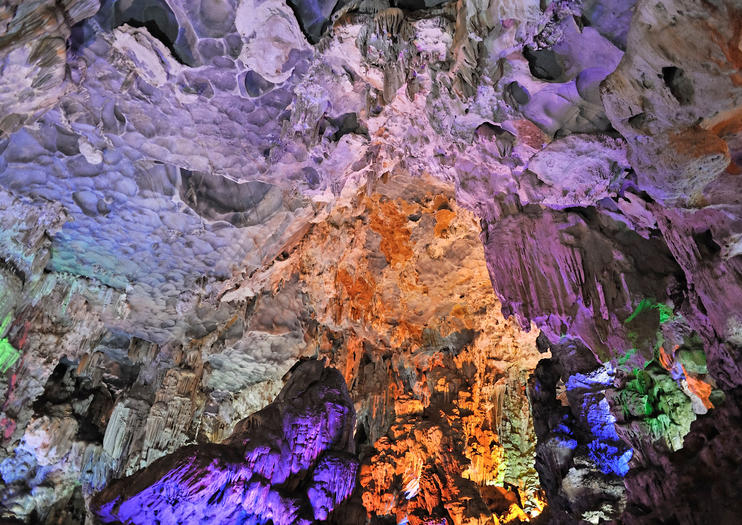 Maze Cave (Hang Mê Cung or Động Mê Cung in Viatnamese) stands out among the many caves of Halong Bay for more than just its beauty—it’s also an important archaeological site where significant prehistoric remains have been found that date back as far as 7,000 to 10,000 years. It is occasionally called "Bewitching Grotto".

The Basics
Squeeze through Me Cung Cave’s narrow doorway, a gaping hole etched into the cliffside, and you’ll find yourself in an underground wonderland, with small rocky chambers and tumbling stalagmites and stalactites, all lit by slivers of daylight and sprinkled with fossilized shells. Following the pathway out of the cave, a rock-cut stairwell leads to another dramatic sight: shimmering Me Cung Lake. Circled by karst cliffs, its startling blue waters harbor a colorful array of coral, fish, and sea creatures. Many overnight cruises stop at the cave and dock near Lom Bo Island to take advantage of its calm waters, ideal for swimming. Halong Bay day trips don’t typically stop at Maze Cave, so check itineraries carefully to ensure a stop here.

Things to Know Before You Go
How to Get There
Maze Cave is located within the karst on Lom Bo Island, close to Sung Sot Cave and Titop Island in Halong Bay. The best way to reach the cave is as part of an organized Halong Bay Cruise.

When to Get There
For the best balance of good weather and thinner crowds, plan your visit to the cave (and other sights around Halong Bay) during the spring and autumn shoulder seasons. If you’re cruising in December or January, be sure to book early.

Human History of Me Cung Cave
Pre-Halong humans dwelled in the cave between 7,000 and 10,000 years ago. The sheltered space was both airy and dry, and an abundance of octopus and shrimp in the grotto provided sustenance. Among the archaeological remains excavated from the cave was a fossilized animal skeleton.

1 Tours and Activities to Experience Maze Cave (Hang Me Cung)

Enhance your experience of one of Vietnam’s most popular attractions on a luxurious 3-day cruise of Halong Bay, a UNESCO World Heritage Site. Opting for a longer cruise means you’ll be able to explore at a relaxed pace and enjoy the bay before it gets overrun with midday cruises. Plus, you’ll witness more sunsets and sunrises, and visit less-crowded caves and beaches.
…More
From
US$356.42
From
US$356.42

Things to do near Halong Bay