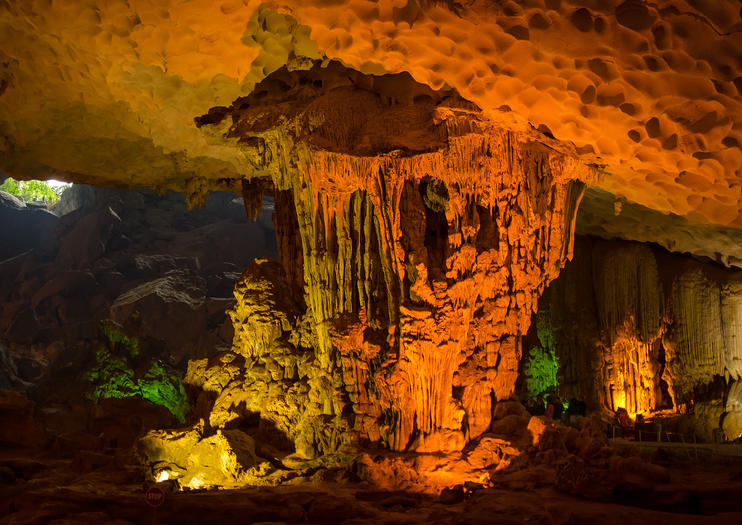 What many visitors may not know about UNESCO World Heritage Site Halong Bay, just outside of Hanoi, is that the bay itself isn’t the area’s only attraction. The limestone karst formations of the bay look impressive from the outside, but many of them are just as impressive from within. Surprise Cave (Hang Sửng Sốt) is the best known cave of Halong Bay and one of the most spectacular.

The grotto has been outfitted with a smooth walking path and is colorfully lit throughout, though you will have to climb a series of stone steps to reach the cave’s entrance.
Address: Sung Sot Cave, Quang Ninh province, Vietnam
Read MoreShow Less
Admission Tickets (1)

4
Halong Bay day trip from Halong city, led by a knowledgeable guide Take a day cruise in UNESCO-listed Halong Bay Kayak around the bay and enjoy a seafood lunch on board Explore Sung Sot Cave (Surprised Cace) and Titop island
…More
From
US$38.00
From
US$38.00

309
Spend a day visiting the top sights of Halong Bay on a high-class cruise. Luxury transportation from Hanoi makes transforms your road journey into a comfortable sightseeing experience. After a welcome drink on board the ship, enjoy a 9-dish Vietnamese lunch. The well-rounded itinerary is perfect for travelers who are short on time, with visits Hang Luon (Luon Tunnel) and Surprising Cave.  You also have the opportunity to kayak or rowboat.
…More
From
US$79.00
From
US$79.00

142
Royal Palace Cruise is the luxury wooden traditional cruise in Halong bay. it is a special and unique traditional cruise in Royal Style. The cruise took us a long time to build it and it is ready and launched in December 2015. Until now, we served many travelers in different countries, in the group in big families, or couple, solo travelers, they are all enjoying our cruise trip with its cabins and service offered during the trip. We could ensure that we are the number first choice for your trip in Halong Bay for a luxury holiday in your budget cost for your Halong bay tour in a relaxing holiday to enjoy your comfort
…More
From
US$111.80
Price varies by group size
From
US$111.80
Price varies by group size

Halong Bay In Just One Day with Ti Top Island

104
Halong Bay is one of the must-see attractions in Vietnam, even for travelers on a time budget. This full-day tour of the UNESCO-listed bay is the perfect choice if you’re trying to squeeze in a quick trip from Hanoi. Take it easy with all-inclusive transportation plus lunch, and enjoy kayaking, swimming, and hiking to the Ti Top Island vista point.
…More
From
US$39.00
Price varies by group size
From
US$39.00
Price varies by group size

9
This private 8-hour cruise on World Heritage–listed Halong Bay departs from the harbor. You’ll pass limestone karsts rising from emerald green waters dotted with islets and visit the spectacular natural wonder of Sung Sot Cave (Amazing Cave) with a personal guide. Continue on to Ti Top Island with the option to explore the beauty of Halong Bay by kayak — fun for novice and experienced kayakers alike. Bonus: enjoy a seafood lunch served on board.
…More
From
US$110.26
From
US$110.26

5
The UNESCO-listed landscapes of Halong Bay are among Vietnam’s most visited sites and the only way to explore is on a boat cruise. With this tour, take in the highlights in a single day—ideal for time-crunched travelers or those on a budget. Visit popular attractions including Ti Top Island and Sung Sot Cave, enjoy activities such as swimming and kayaking, and tuck into a tasty seafood lunch as you gaze out over the bay.
…More
From
US$41.00
From
US$41.00

104
Spend the afternoon at World Heritage–listed Halong Bay.  After a scenic drive through the Red River Delta, you're greeted with a seafood lunch aboard a boat. Afterward, you can swim in emerald-green waters, kayak to Sung Sot (Surprising Cave), or simply relax on the sun deck while you glide past karst islets. Hotel transport included from Hanoi.
…More
From
US$45.00
From
US$45.00

12
Cruise through Halong Bay on this stripped back tour. Make the most of a few days in this exquisite area with a catered tour on a boat. Activity options include kayaking or a bamboo boat to experience the water, hiking up an island, or simply sitting back and enjoying the view.
…More
From
US$111.50
Price varies by group size
From
US$111.50
Price varies by group size

This trip with enjoyed nearly 06 hours cruising in Halong Bay like 2 day cruise, you will have chance to visit 2 most beautiful places in Halong Bay. First place named "TITOV ISLAND" where you can swimming or playing on sandy beach with excellent backdrop or climb up mountain for a panoramic view of the Bay. Second place named "SUNG SOT CAVE" where hide out in the beautiful Caves Walk and is one of the most spectacular and largest grottoes of Ha Long Bay with a lot of nature of stalagmites and stalagmites with different shapes of sea lives, then go kayaking or bamboo boat in Luon Cave to discover the beautiful lagoon
…More
From
US$30.00
From
US$30.00

2
Our Cruise 1 is designed in a combination of Oriental and luxury Westerner modern style with its 14 converged elegant, sophisticated cabins. The cruise is fully equipped with amenities and 1 restaurants, the Dining bar and the a bar. We pursue to offer the most satisfactory experience to tourists during their discovering the world natural wonder in Ha Long Bay and bring the best relaxing moments to the travelers of all East and West. Given a clear and consistent business philosophy to certain the hospitable luxe to all travelers and with its professional and dedicated staff,; Cruises are proud to be the best way to discover Halong bay in style.
…More
From
US$95.00
From
US$95.00

44
Halong Bay day trip from Hanoi - best choice when you don't have much time Taking a day cruise in UNESCO-listed Halong Bay Doing Kayak/Bamboo boat around the bay and enjoy a seafood lunch on boat Exploring Sung Sot Cave (Surprised Cave) and Titop island Including hotel transfer by coach from Hanoi Following fast expressway Hanoi - Hai Phong - Halong saving 3 hours driving
…More
From
US$45.00
From
US$45.00

1
Experience the pristine waters, scenic coastline, and iconic rock outcroppings of Ha Long Bay on this efficiently organized cruise designed for busy travelers who want to see all the highlights of the bay in one day. With specific crowd avoidance routes, this tour saves time by not getting caught up in the normal tourist spots. The extra time is devoted to exploring islands and basking in the sun.
…More
From
US$87.18
Price varies by group size
From
US$87.18
Price varies by group size

Lavender Cruises are already to bring you to the most fantastically shaped islands, beautiful beaches, and great natural caves. You also learn more about Halong Bay’s history and local people.Two days one night cruise is ideal for those who want to experience the Halong bay with full of exciting activities, kayaking, swimming and more
…More
From
US$176.42
From
US$176.42

19
Cruising in Halong bay, passing beautiful landscapes Do kayaking & Swimming in the tranquil lagoons Visiting Titop island, enjoy amazing panorama views from the top Visiting Surprise cave - the most beautiful cave in Halong bay Enjoy Amazing Sunset from the boat Enjoy cooking class (Making Vietnamese spring rolls) Enjoy amazing night onboard Making new friends from over the world Travel with traditional boat & small group Save your time & money
…More
From
US$119.43
From
US$119.43

A day trip on our cruise is the best choice for your to experience the magnificent Halong Bay with our “all-in-one” itinerary for a limited time schedule. You will not only explore one of the most beautiful cave in Halong Bay, but will also having chance to join many exciting activities.
…More
From
US$93.47
From
US$93.47

Halong Bay now is well-known as the paradise of sea and islands with thousand of lime-stone mountains and islets in various sizes and shapes. Our cruise welcomes you to experience the new definition of contemporary luxury. We offer not only a luxury cruise service of the highest safety standard but also a completely unique experience with a carefully researched itinerary, attentive service, authentic decor, delicious food....
…More
From
US$150.00
From
US$150.00

3
– You are served welcome drink, our guide instructs you with safety regulation and itinerary to start – Enjoying lunch with Vietnamese dishes catered by our chef with hospitality – Passing Fighting Cock Islet to approach Titov Island for swimming and trekking to top of mountain then visit Sung Sot cave (one of the most beautiful dry cave in Halong Bay) to visit thousands of stalagmites and stalactites with different shapes from the bottom up to the cave ceiling – Stopping at the floating house to experience Kayaking (by yourself) or Bamboo boat (rowed by the local people) or just relaxing aboard
…More
From
US$62.00
Price varies by group size
From
US$62.00
Price varies by group size

Halong Bay is one of Vietnam’s most famous natural wonders and a UNESCO World Heritage Site. This tour takes in the highlights on a day trip from Hanoi and is ideal for those short on time. Travel through the Red River Delta, cruise around on a traditional junk boat, explore the Sung Sot Cave and Titop Island, enjoy a kayaking or bamboo boat excursion, and dine on a seafood lunch on board.
…More
From
US$32.00
From
US$32.00

Things to do near Halong Bay