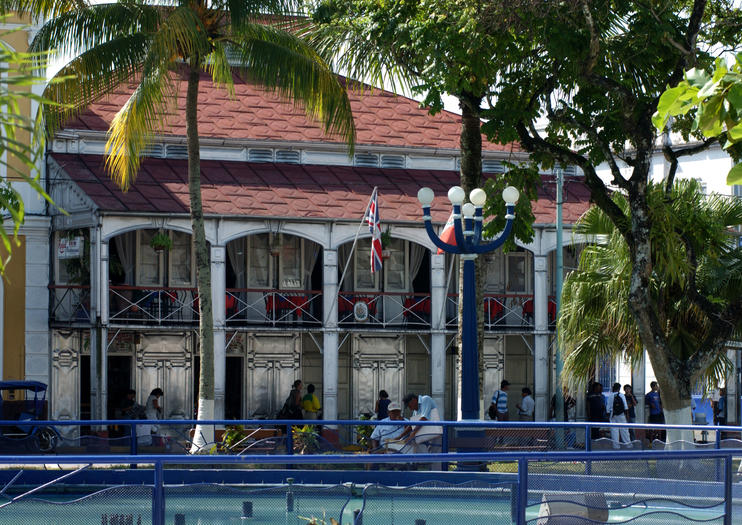 The most famous building in Iquitos isn’t the cathedral (though the Gothic, 1911 Iglesia Matriz is quite lovely), it’s Iron House (Casa de Fierro). Located right on the Plaza de Armas, the two-story structure seems completely out of place, a graceful construction of sheet metal, fitted together with a rigorous delicacy hardly characteristic of this rough-and-tumble jungle town.
That’s no surprise, once you learn that the Iron House (Casa de Fierro) was designed by French architect Gustave Eiffel (of Eiffel Tower fame), forged in Belgium and purchased by rubber baron Anselmo del Aguila after he saw it on display at the 1889 International Exposition of Paris. He had the entire thing shipped across the Atlantic and up the Amazon, then reconstructed here, piece by piece, during the height of the rubber boom.
Today, the building has been refurbished to its original gleaming glory, and remains the star of the city center, though not everyone is impressed. You can tour the interior, or just grab a table at the Amazon Cafe upstairs. The food may not always get raves, but there’s no better view over the obelisk, fountains, hotels and ATM machines of the Plaza de Armas, punctuated by a 24-hour parade of beeping mototaxis endlessly circling the busy scene.
Address: Putumayo 180, on Plaza de Armas, Iquitos, Loreto Region, Peru
Hours: Open Daily, 8am-12pm
Read MoreShow Less

Things to do near Iquitos