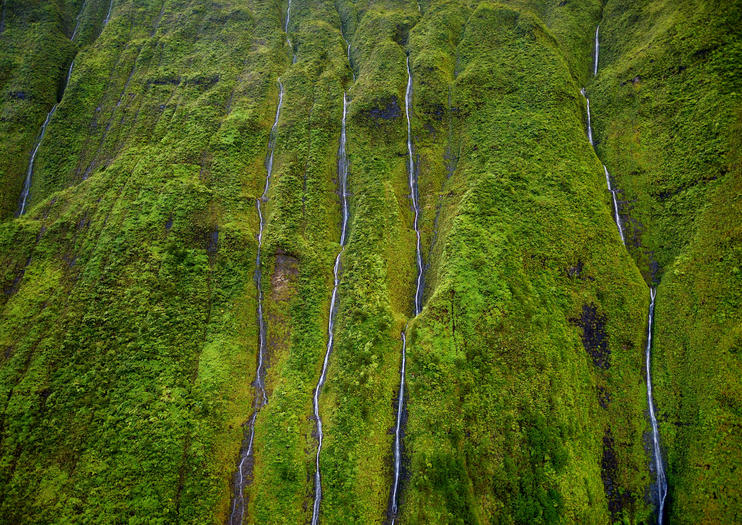 Be prepared for more colors of green than you’ve ever seen before in the area surrounding Kauai’s central Mt. Waialeale—it’s one of the wettest places on planet Earth, receiving more than 450 inches of rainfall each year. It’s dominating sheer green 5,066 cliff wall has also been called the Wall of Tears, for the many waterfalls that fill its crevices and stream down its face during frequent rains. And, if the setting looks familiar, that could be because it starred as the backdrop for opening scenes of the original 1992 Jurassic Park movie. To get to the base of Waialeale, and to the the Wailua River, you’ll have to take a 4x4 down the bumpy Wailua Forestry Management Road and then trek in. Alternatively, several helicopter tours take you much closer to its cliff face—and its waterfalls—than you could easily get to on a hike.

There’s only one company currently permitted to take groups of trekkers back in along the bumpy Wailua Forestry Management access road—Aloha Kauai Tours—and they only offer short day hikes into the surrounding valley. If you don’t have 4-wheel drive—and many rental cars don’t—this might be your only option for trekking access other than hiking the more than 10 miles down the road to the trailhead. To get to the actual mountain base, it’s another several miles through thick jungle, which is easily bypassed in a helicopter tour.
Address: Kauai, Hawaii, USA, USA
Read MoreShow Less

1588
Choose one passenger when booking to see your pricing options on this bird’s-eye view of Kauai’s spectacular scenery on a deluxe air tour! Marvel at natural wonders like the Na Pali Coast, Waimea Canyon, Hanalei Bay and tropical waterfalls. Soar over the "Garden Island" in an aircraft specially designed for sightseeing as your pilot provides narration through high-tech headsets during the flight.
...  More
From
US$158.67
From
US$158.67
Learn More

353
Soar over the entire Garden Island for unforgettable views on this air tour of Kauai. From aboard an aircraft designed for sightseeing, soak up breathtaking views of natural attractions like Waimea Canyon, Opaekaa Falls, the rugged Na Pa Coast, and Mt Waialeale — the wettest spot on earth. Your experienced pilot provides informative narration during this thrilling flight.
...  More
From
US$145.00
From
US$145.00
Learn More

1429
To fully appreciate the beauty of Hawaii’s ‘Garden Isle,’ take to the skies above Kauai on a helicopter tour in a new Eurocopter Eco-Star. Soar over the island’s diverse terrain, from rain-soaked Mt. Waialeale and the waterfalls of Waiapuna to the dry red ravine of Waimea Canyon and the breathtaking emerald spires of the Na Pali Coast. A two-way radio to communicate with the pilot and expansive viewing glass add to the unforgettable flight.
...  More
From
US$308.27
From
US$308.27
Learn More

53
Enjoy personalized attention and privacy for you and your partner on this flight tour over Kauai Pali. With just your party and a pilot, you'll get commentary tailored to your interests and plenty of opportunity to ask questions. Take in panoramic aerial views over the cliffs, sea, waterfalls, and forested hills, as well as excellent photo ops.
...  More
From
US$165.34
From
US$165.34
Learn More

13
On this incredible tour of Kauai, you’ll experience views so beautiful they will take your breath away. Explore the stunning Manawaiopuna Falls, also known as “Jurassic Park” falls, wedged in between the emerald green mountain top of the Hanapepe Valley. Soar over the amazing views of the Olokele Canyon and majestic Waimea Canyon. Waimea canyon is also know as the the “Grand Canyon of the Pacific,” where you’ll catch sight of dozens of cascading waterfalls including the 2000-foot Waipo’o falls. Then on to the sacred Napali Coast with its 3500-foot seacliffs plummetting into the vast Pacific ocean. Along the Napali coast you will fly into the secret valleys of Nualolo and Kalalau valley with there amazing landscape. On to Kauai’s magical North Shore which reveals the sculpted green Hanalei Valley with more waterfalls than you can count. Last but not least the pilot will take you to the Wai'ale'ale crater with the "Wall of Tears" A dormant shield Volcano which receives 500" of rainfall.
...  More
From
US$349.00
From
US$349.00
Learn More

70
Soar over Kauai aboard a vintage biplane for unmatched aerial views of the Garden Island. On this flight, get a bird’s-eye perspective on Kauai’s diverse topography and amazing natural attractions. Fly above the Waimea Canyon, Hanalei Bay, Mt Waialeale, cascading waterfalls, white sandy beaches and more while your expert pilot provides narration on the island’s history and geography.
...  More
From
US$560.00
per group
From
US$560.00
per group
Learn More

9
Known as the "Garden Isle," Kauai is home to some of the wettest places on earth. Take a helicopter tour over the island’s lush, yet rugged landscape, including locations featured in feature films such as "Jurassic Park". Fly over Waimea Canyon—which Mark Twain dubbed "The Grand Canyon of the Pacific"—the Bali Hai Cliffs, the North Shore, Mount Makana, and more on this fantastic aerial island tour.
...  More
From
US$279.99
From
US$279.99
Learn More