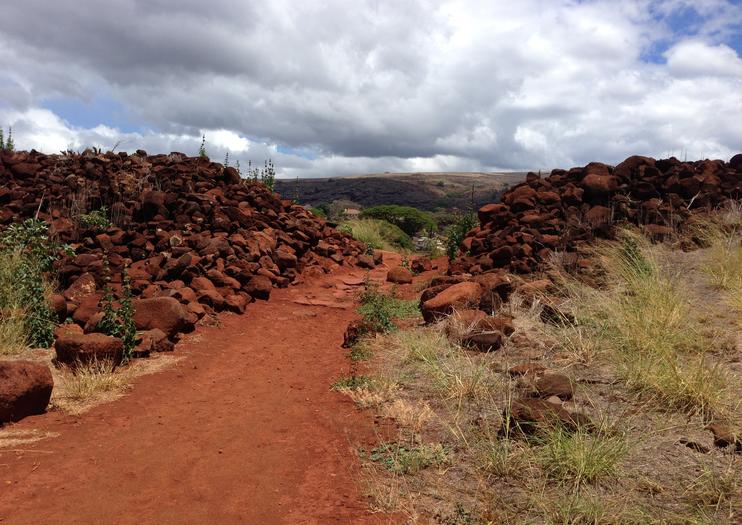 Evidence of a little-remembered attempt by Russians to gain a foothold in Hawaii between 1815 and 1817 can still be found in the remnants of an old fort alongside the mouth of the Waimea River. Though today the site is little more than jumbled red rock walls hinting at its former layout, an irregular octagon guarding entrance into Kauai via the waterway, it once was the site of grand plans to use Kauai as a permanent provisioning and trading station for the state-sponsored Russian American Company. With outer rock walls constructed from ancient heiau (Hawaiian temples), the fort once included residences, a chapel, gardens, a trading center and the main fort building. Visitors can explore what’s left via a self-guided interpretive tour following signage with drawings of how the area once appeared.
Here, Dr. Georg Anton Schäffer, sent to retrieve lost cargo from a wrecked Russian American Company ship, overstepped the orders of his mission. Schäffer instead built the fort complex, befriended Kauai’s chief, set him against the newly instated Hawaiian King Kamehameha and secured a sandalwood monopoly for the company. When Mother Russia learned of Schäffer’s actions, however, she disapproved. Russia didn’t want to become embroiled in the already complicated politics of the islands; they just wanted their cargo back. So, Russia summoned Dr. Schäffer home, leaving the fort to be claimed by the Hawaiians, and, later, after the dismantling in 1864, the elements.

The remains of the fort—within the larger Russian Fort Elizabeth State Historical Park—are located off Kaumualii Highway (named for Kauai’s last king and the man Dr. Schäffer befriended) on the river’s eastern bank about a mile south of Waimea proper. The site has a small parking lot and is open daily during daylight hours. If visiting during peak sun, bring sunscreen and a hat; the area is exposed with little shade.
Address: Kaumualii Hwy, Waimea, Hawaii 96796, USA
Read MoreShow Less

52
Explore Kauai at your own pace with this audio tour app that uses GPS to guide you to and around some of the island's top attractions. Skip paying for a bus tour and make the most of your vacation time with the freedom to stop and go as you please. Along the way, the app provides narration, stories, and fun facts. The tours can be downloaded and used offline so you don't have to worry about service around the island.
...  More
From
US$21.32
per group
From
US$21.32
per group
Learn More

13
Experience the majesty of ‘The Grand Canyon of the Pacific’ on this full-day tour of the Waimea Canyon and highlights of Kauai’s southern shore. Peer into the cavernous red expanse from the best vantage points, and learn how the canyon was formed by thousands of years of erosion. Along the way, see other natural and cultural attractions including the Spouting Horn blowhole, Waimea Town, the Hanapepe Valley Lookout, Fort Elizabeth and old Koloa Town.
...  More
From
US$85.00
From
US$85.00
Learn More

67
Discover some of the Garden Isle’s most enchanting landscapes and cultural attractions on a full-day Kauai sightseeing tour by coach. Peer into the majestic, multicolored expanse of Waimea Canyon, be surrounded by the lush tropical paradise of the Fern Grotto and learn about sacred Hawaiian legends on a cruise down the Wailua River. See many of the island’s south shore highlights along the way, including old Koloa Town, the Spouting Horn natural blowhole, Captain Cook’s Landing and Coco Palms Grove.
...  More
From
US$129.00
From
US$129.00
Learn More

35
While in port in Kauai, take a half-day tour to Waimea Canyon, known as the ‘Grand Canyon of the Pacific'.  In stark contrast to Kauai’s lushness is Waimea Canyon State Park. The canyon offers one of the best views of the island's western coast.  Ddrive through Hawaii’s first sugarcane plantation and to the town of Waimea, made famous by Captain Cook hundreds of years ago. Before concluding your tour back at your original departure point, stop to see the water fly high at Po’ipu’s Spouting Horn on the island's southern side.
...  More
From
US$73.60
From
US$73.60
Learn More