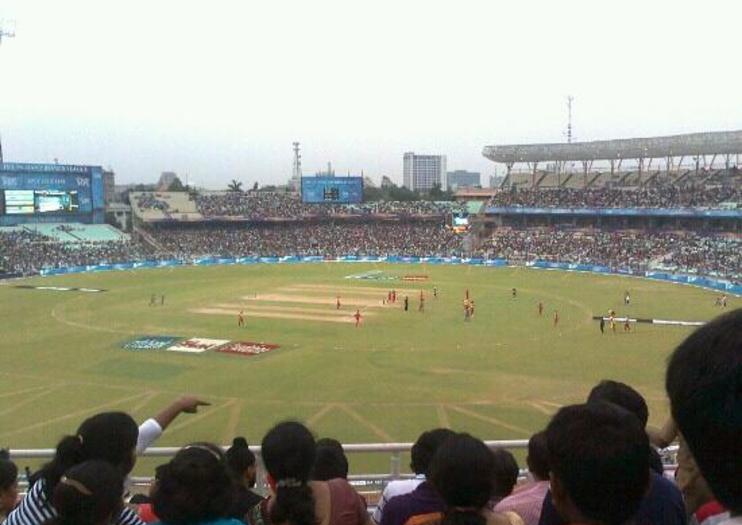 Named after the gardens that lay beyond it, Eden Gardens is a cricket ground in Kolkata that’s home to the Bengal cricket team and the Kolkata Knight Riders. It’s also the venue for international cricket matches and is the largest cricket stadium in India in terms of seating capacity.
Established in 1864, Eden Gardens has since become one of the most iconic cricket stadiums in the world. Following renovations for the Cricket World Cup in 2011, the stadium seats over 90,000 spectators (a capacity actually lower than before the upgrade).
Within the grounds, the gardens themselves feature a picturesque lake with a tiny Burmese pagoda at its center. It’s a peaceful spot that’s well worth a stroll around on a visit to the stadium.

The stadium can be reached both via the Eden Gardens Railway Station and the Eden Gardens Circular stop. Entry to the stadium is usually limited to the south gate, but a north portal near Gate 12 is often open, too.
Address: Kolkata, West Bengal, India, India
Read MoreShow Less

9
Explore the main attractions of Calcutta on this all-day guided tour. First, visit Mother Teresa's house and learn more about her humanitarian efforts. Other stops include Park Street Cemetery, St. Paul's Cathedral, Victoria Memorial Hall, Howrah Bridge (which is one of the busiest bridges in the world), and more. Plus, browse some of the city’s markets.
…More
From
US$85.00
Price varies by group size
From
US$85.00
Price varies by group size
Face masks required for travelers in public areas
Face masks required for guides in public areas
Face masks provided for travelers
Learn More
Taking safety measures

2
Hello Calcutta! introduces you to local lives, culture and heritage of Kolkata (Calcutta) "the city of joy). During the 4 hours of Cultural Walk tour, you will walk past the colonial buildings made during the British reign, visit the iconic Howrah Bridge, and take a ferry ride in Ganges and much more... Walk with us to visit the oldest market, was established for British residents in Kolkata. Experience the early morning chaos of locals Market. Explore Vegetable, Fruits & Spice Market. Visit India’s Largest Flower Market and walk on the world’s busiest iconic bridge “Howrah Bridge”. Explore Kumartuli (potter’s town/colony), interact with local artiste and see them handcrafting clay idols. Breakfast at a local restaurant. Friendlier than India’s other metropolises, this is a city you ‘feel’ more than simply visit. Let's Walk, Explore & Experience Kolkata like a local folk.
…More
From
US$30.36
US$37.95
US$7.59 savings
From
US$30.36
US$37.95
US$7.59 savings
Face masks required for travelers in public areas
Face masks required for guides in public areas
Face masks provided for travelers
Learn More
Taking safety measures

9
See the highlights of the big, bustling city of Kolkata on an easy full-day trip. Experience the culture and beautiful architecture of the city three ways: via car, on food, and by boat along the Hooghly River. This is a private tour, so you’ll receive personalized attention from your guide. Fit a lot of sightseeing into one day without worrying about hailing taxis or other logistics.
…More
From
US$55.45
Price varies by group size
From
US$55.45
Price varies by group size
Face masks required for travelers in public areas
Face masks required for guides in public areas
Hand sanitizer available to travelers and staff
Learn More
Taking safety measures

In this walking tour with our do-it-yourself Audio Guide (On HopOn India app) you will visit some of the important sporting landmarks at the Maidan – starting from the iconic Eden Gardens to the three nerve centres of Kolkata’s age old football heritage – Mohun Bagan, East Bengal and Mohammedan Sporting Grounds. The most special features of this experience are : 1. The App opens up new places and new stories for you in the same old cities 2. Each walk is crafted like a masterpiece to offer an immersive experience to the traveller with the correct mix of history, culture, myth, food , through professional narration, with background scores of music, qawalli or sound affects, here and there 3. There is no need for you to depend on a guide - the traveller can take the walk anytime as per will, at his/ her own pace 4. The content is developed by domain experts 5.You pay once for three months and need not pay the guide repeatedly.
…More
From
US$5.89
From
US$5.89
Face masks required for travelers in public areas
Contactless payments for gratuities and add-ons
Learn More
Taking safety measures

6
Walking is the best way to feel the texture of a city. Our tour expert will hop you through the 'White town'- colonial city that was developed by the East India Company. Explore the small streets and bylanes, while admiring the oldest High Court in India the 'Calcutta High Court'.
…More
From
US$41.00
From
US$41.00

5
Every city has its own scent. If you want to feel the fragrance of the historical city of Kolkata in a day, this tour awaits you. Planned fully according to your choice, this 8 hours will take you through journey where you will touch the Colonial and Historical landmarks and also the modern part of the City. This tour is for the people who wants little information about the sightseeing places and handouts will be provided for the information about the places. So come, take the unique opportunity of a time travel in a day. **This tour is included with a English Speaking Driver.
…More
From
US$80.00
Price varies by group size
From
US$80.00
Price varies by group size
Face masks required for travelers in public areas
Hand sanitizer available to travelers and staff
Gear/equipment sanitized between use
Learn More
Taking safety measures

Things to do near Kolkata