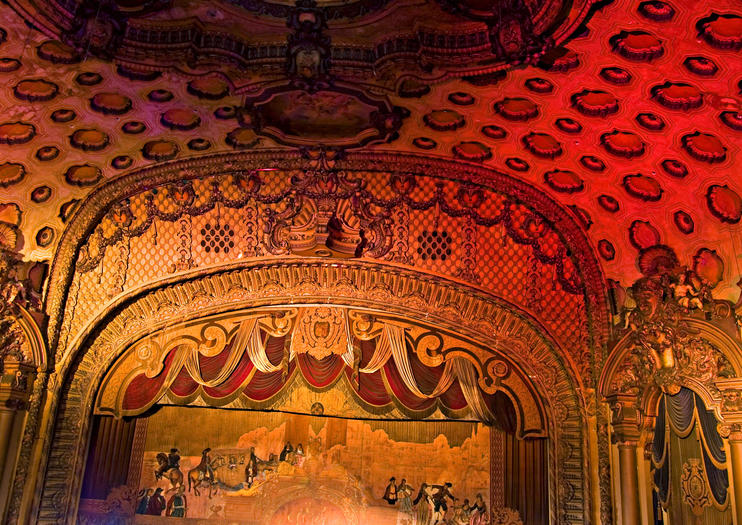 The Los Angeles Broadway Theater District is the first and largest theater district in the United States. Los Angeles has always been a performing arts and entertainment hub, and the artistic area was listed and entered into the National Register of Historic Places. It consists of twelve historic movie theaters lining six blocks of Broadway Street. The theaters were built as early as 1910, when Los Angeles was comparatively quite small in population. By 1931, when a few of the theaters were completed, Los Angeles had the highest concentration of cinemas in the world.
Walking along Broadway Street, with the many marquees and lavishly decorated exteriors, one gets a true sense of the era frozen in time. Routine efforts are made to ensure the conservation of the area architecture and cinematic palaces and to keep the history alive in the district. Though these days, most of the theaters are used for special events or markets rather than showings of films.

61
Some things just don't get old, especially when they're part of LA's historic Downtown core. On this 2-hour walking tour, your small group visits some of the finest architectural sites from the city's golden era: the Pantages, the Bradbury Building, Grand Central Market and the Broadway Theater District. There's no better way to get a feel for the City of Angels than exploring it on foot, so let a local guide lead the way as you absorb the colorful street scenes, history, and people.
…More
From
US$28.00
From
US$28.00

27
This walking tour of Downtown LA takes in the city's finest architectural monuments including the city's tallest building, the Broadway Theater District, Central Library, the NoMadHotel, and more. As you explore, hear a guide discuss the history and architecture of this vibrant city.
…More
From
US$28.00
From
US$28.00

2
Experience the bustle of Los Angeles night scene without the hassle of navigating on your own on a private tour to the city’s top landmarks and neighborhoods, from City Hall to Hollywood Boulevard. Your guide, who ensures you never miss a landmark, provides little–known trivia about the city’s history and culture and inside recommendations for the rest of your stay.
…More
From
US$121.00
From
US$121.00
Face masks required for travelers in public areas
Face masks required for guides in public areas
Hand sanitizer available to travelers and staff
Learn More
Taking safety measures

Take a 2-hour private walking tour of downtown L.A. and see some of the city’s top landmarks. Admire the architecture of Walt Disney Music Hall, stroll through the tasty Grand Central market, and visit L.A. City Hall. Enjoy a complimentary cup of coffee at the beginning of the tour to get you energized and learn about the ‘City of Angels’ from your informative guide.
…More
From
US$99.00
From
US$99.00
Face masks required for travelers in public areas
Face masks required for guides in public areas
Hand sanitizer available to travelers and staff
Learn More
Taking safety measures

4
Los Angeles is the epicenter of American filmmaking, and this Downtown Los Angeles walking tour leads you right to its beating heart. This 2-hour excursion screens famous movie clips and then visits those very locations. It's a small-group experience that's perfect for the whole family, and, if you're lucky, you might get caught up in a film production, too.
…More
From
US$28.00
From
US$28.00