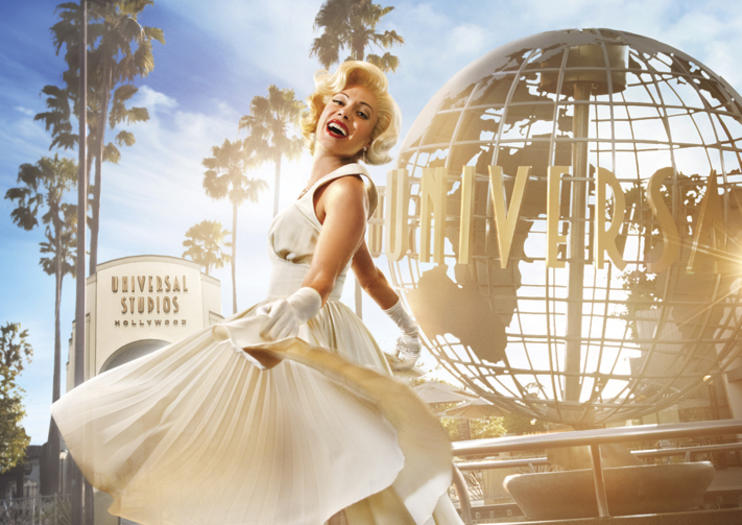 One of the world's oldest continuously operating movie studios, Universal® Studios Hollywood presents an entertaining mix of thrill rides and live action shows, plus a tram ride. The large California theme park cleverly integrates the shows and rides with behind-the-scenes presentations on movie-making.
The Basics
First-timers should head straight for the tram tour, which takes visitors around the sound stages in the front lot, then heads to the backlot past the crash site from War of the Worlds, the vehicles from Jurassic Park, and the spooky Bates Motel from Psycho. Also prepare to face down King Kong, brave a flash flood, and survive a shark attack, a spitting dinosaur, and an 8.3-magnitude earthquake. The Studio Tour includes live commentary from one of the park's tour guides.
Things to Know Before You Go
How to Get to Universal Studios
Universal Studios is located in Universal City, west of Griffith Park, near Los Angeles. To get there, take the Hollywood Freeway and get off at either the Universal Center Drive exit or Lankershim Boulevard exit.
When to Get There
Universal Studios Hollywood is open year-round with varying opening hours. As with most popular attractions, you'll beat the crowds and get the most out of your ticket by arriving when the gates open.
Universal Studios Hollywood Options and Upgrades
Sign up for the VIP Experience to get behind the scenes and see the Universal Studios backlot. Stops on the tour are dictated by television show production schedules, but you'll be able to see what goes on at a working movie studio.
Address: 1000 Universal Center Drive, Universal City, CA 91608, USA
Admission: Varies
Read MoreShow Less
Admission Tickets (2)

Universal Studios Hollywood with transfers from Los Angeles or Anaheim

2
Experience your favorite movies and TV shows on a day trip to Universal Studios Hollywood. After choosing a departure time that works best for you, enjoy a convenient hotel pickup in Los Angeles or Anaheim. Go behind the scenes on a Universal Studios tour and explore new and redesigned experiences like Jurassic World Ride, DreamWorks Theater, and the Wizarding World of Harry Potter.
…More
From
US$160.00
From
US$160.00
Face masks required for travelers in public areas
Face masks required for guides in public areas
Hand sanitizer available to travelers and staff
Learn More
Taking safety measures
View More Ticket Options

Universal Studios Hollywood with transfers from Los Angeles or Anaheim

2
Experience your favorite movies and TV shows on a day trip to Universal Studios Hollywood. After choosing a departure time that works best for you, enjoy a convenient hotel pickup in Los Angeles or Anaheim. Go behind the scenes on a Universal Studios tour and explore new and redesigned experiences like Jurassic World Ride, DreamWorks Theater, and the Wizarding World of Harry Potter.
…More
From
US$160.00
From
US$160.00
Face masks required for travelers in public areas
Face masks required for guides in public areas
Hand sanitizer available to travelers and staff
Learn More
Taking safety measures

144
Save $1,000 or more on dozens of top Southern California attractions, activities, eateries and stores with the Go Los Angeles™ Pass. Use your Go Pass in Los Angeles to save up to 55% on a variety of great activities and businesses, allowing you to explore at your own pace. You can purchase passes valid for between one and seven days (allowing unlimited use for that many days within 14 days of the first use). 3-, 4-, 5-, and 7-day passes include 1-day, skip-the-line access to Universal Studios! Please note: Enjoy the extra flexibility in case your travel plans need to change: All passes are valid for one year from purchase date and only become activated with your first attraction visit. After activation your pass will be valid for 30 days and/or the remaining number of attraction choices purchased.
…More
From
US$99.00
From
US$99.00

Take your Los Angeles trip to new heights during this private 45 minute in the air helicopter sightseeing flight and 30-45 at the pad, including a spectacular landing. Get a bird’s-eye view of L.A. attractions like Santa Monica Pier, Beverly Hills, Hollywood Sign the Getty Museum and various celebrity homes before setting down on a private hilltop landing pad. - Take a scenic helicopter flight complete with landing on a private Malibu peak. - Enjoy bird's-eye views of Santa Monica Pier, Hollywood Sign, Beverly Hills, the Getty Museum, and celebrity homes. - Soak up stunning views of the Pacific. - Romantic experience that's perfect for couples and special occasions.
…More
From
US$650.00
From
US$650.00
Face masks required for travelers in public areas
Hand sanitizer available to travelers and staff
Regularly sanitized high-traffic areas
Learn More
Taking safety measures

For this tour we will make three stops: the Hollywood Sign, Universal Studios overlook and the Beverly Hills sign so you can take photos in addition to seeing the Hollywood Walk of Fame, Chinese Theater, celebrity homes and popular movie scenes. This is a group tour. However, private tours may be arranged for larger groups with advanced purchase.
…More
From
US$50.26
From
US$50.26

I live in the city of Los Angeles in the USA. I am dedicated to helping tourist groups to visit the city and enjoy their vacations here in LA. If you are interested we can chat by whasapp or some other means to let me know about your travel needs. My car can accommodate a total of 4 people without telling me. There are many interesting places and things to do in LA. There are events that can be attended for free as America's got talent. Dr Phil, etc. There are places that are fun to know, beaches, famous places, places for shopping etc. My job is to help you and take you to those places.
…More
From
US$384.62
per group
From
US$384.62
per group

Explore Hollywood and beyond on this all-day guided excursion. After a convenient hotel pickup, head out with a knowledgeable, entertaining guide and see landmarks like the Hollywood sign, the Dolby and Chinese theaters, and the Walk of Fame. Visit major film studios and glimpse the homes of movie stars, cruise the Sunset Strip and tour Melrose Place and Rodeo Drive in Beverly Hills.
…More
From
US$767.95
per group
From
US$767.95
per group

Make your transfer To Hollywood / Burbank, Ca., the surrounding cities and landmarks,, easy, and pleasant by making an affordable RapidShuttle Private, Direct, Non-Stop reservation that will fit your travel needs and budget.  Because you are Not sharing the ride with other travelers, your schedule is based on your or your party travel arrangements.
…More
From
US$89.00
per group
From
US$89.00
per group