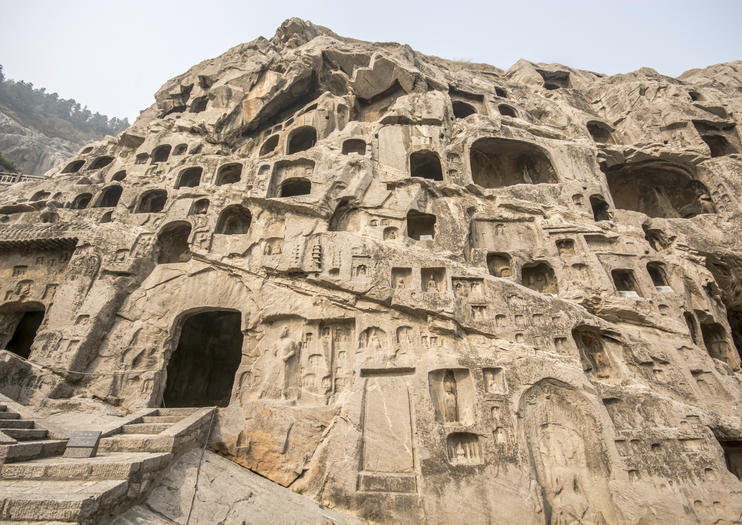 Artists from the Northern Wei dynasty began carving in the Longmen Grottoes (Longmen Caves) in the year 494 and continued to do so for some 200 years. Today, the UNESCO-listed caves, known in Chinese as Longmen Shiku (literally: Dragon's Gate Caves), contain more than 100,000 Buddhist statues and images—one of the best and last remaining collections of Buddhist rock carvings in China.
The 2,300 grottoes and niches extend along the banks of the Yi River, but only a stretch of less than a mile (1 kilometer) is open to visitors. Many of the statues have been decapitated by vandals over the centuries, but many of the heads have been returned, giving visitors a more complete image of what the caves might have looked like in their heyday.
Among the most impressive caves are the Ancestor Worshipping Temple (Fengxian Si), the largest of the accessible grottoes at Longment; Ten Thousand Buddha Cave (Wan Fo Dong) with its 15,000 Buddha carvings; and the Three Binyang Caves.

If you want to avoid the tour bus crowds, get to the caves first thing in the morning before the buses arrive or at night, when they’re beautifully illuminated.
Address: China
Hours: March 1- to Oct 31 7am-7:50pm; Nov 1-Feb 28 7:30am-6:50pm
Admission: CNY 120
Read MoreShow Less

The answers provided below are based on answers previously given by the tour provider to customers’ questions.
Q:
What are Longmen Grottoes (Longmen Caves) hours of operation?
A:
Longmen Grottoes (Longmen Caves) hours of operation: March 1- to Oct 31 7am-7:50pm; Nov 1-Feb 28 7:30am-6:50pm. Buy tickets in advance on Viator. If you book with Viator, you can cancel at least 24 hours before the start date of your tour for a full refund.

Things to do near Luoyang