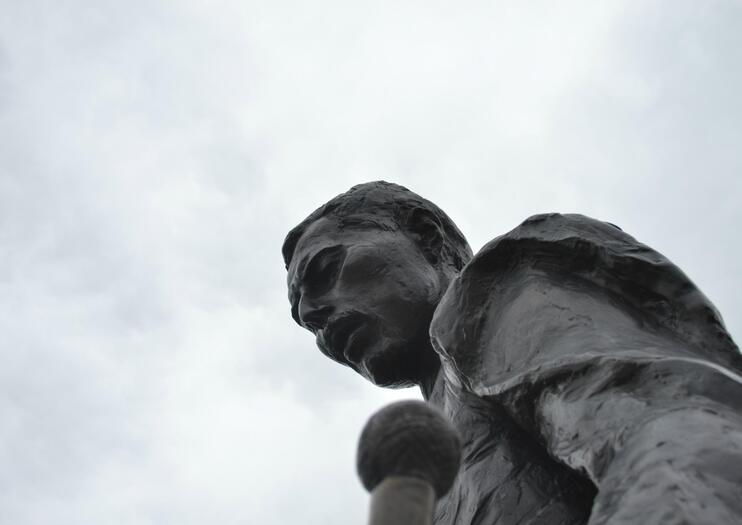 Standing nearly 10 feet tall on the lovely lakeside promenade in Montreux – the home of the second-largest jazz festival in the world – and gazing over to the foothills of the Alps in the distance, the Freddie Mercury statue has become a place of pilgrimage for die-hard Queen fans. Larger than life, made of bronze and always adorned with garlands and flowers, his statue was created by Czech sculptor Irena Sedlecka and placed in this spot in 1996, as a celebration of the iconic pop star who made Montreux his home and whose band recorded seven albums at Mountain Studios, which they eventually bought.
Freddie died of AIDs in 1991, and on the Montreux waterfront he is now remembered in a typically flamboyant stance, arms outstretched and head flung back, emulating his pose on the cover of the last Queen album, Made in Heaven. The statue looks particularly dramatic in the evening hours, as the setting sun creates a colorful backdrop. A memorial day dedicated to Freddie is held annually in Montreux on the first weekend in September.

3
Explore the countryside outside of Geneva on this multi-stop day tour that includes Vevey, the Lavaux vineyards, and Montreux. There's no need to rent a car, and you can enjoy the pleasing scenery on the journey. Listen to insightful narrative as you travel on the area's history, culture, viniculture, and architecture.
...  More
Booked by 35 travelers
From
US$166.27
From
US$166.27
Learn More

128
Take a steamboat cruise and see the Swiss cities of Lavaux and Montreux on this day trip from Geneva. Travel through the Swiss countryside, and visit Chaplin's World, a site dedicated to Charlie Chaplin. Visit the Lavaux UNESCO-listed vineyards and take a guided tour of the opulent chambers of Château de Chillon, and cruise along Lake Geneva on an old steamer boat. Top off the day with time to explore Montreux before heading back to Geneva.
...  More
Booked by 986 travelers
From
US$229.02
From
US$229.02
Learn More

3
Leave Geneva and head for the mountains and lakes on a day trip to Glacier 3000 and Montreux. With a round-trip cable car ride included, you’ll travel up to the glacier area high above Les Diablerets ski resort. Sample sparkling wine and cheese as you gaze at the alpine vistas, and test your nerves on the Alpine Coaster toboggan run. In the afternoon, you’ll travel to the lakeside town of Montreux for free time and a visit to Mountain Studio, where Queen recorded their last album.
...  More
Booked by 70 travelers
From
US$249.93
From
US$249.93
Learn More
Reserve Now & Pay Later
We'll reserve your spot today, and you can cancel up to two days before your experience without making a payment. Secure your spot with ease, stay flexible, and never miss out.
How it works
Find your experience
Choose the experience you want knowing you can secure your spot without being locked in.
Make a reservation
Reserve now and pay later to secure your spot, commitment-free.
Choose when to pay
Come back to pay once your plans are set, or let auto-pay kick in two days before your experience.
Enjoy your experience
Now you're all set! Have a great time.
Frequently Asked Questions  | Terms & Conditions
Reserve Now & Pay Later
Secure your must-do activities without being locked in
Learn More

Bus round trip from Geneva to Montreux

Escape busy Geneva with a round-trip excursion to Montreux on the Swiss Riviera. Enjoy views of UNESCO-listed Lavaux and the Alps, then explore the city’s serene streets and be immersed in its historic architecture, looking out for the many sights that reveal its musical heritage. Depart and return from a central location in Geneva for a hassle-free trip.
...  More
Booked by 15 travelers
From
US$71.11
From
US$71.11
Learn More

Private trip from Geneva to Montreux through Lausanne

4
The charming Swiss villages of Lausanne and Montreux are home to mountain views, glamorous resorts, and beguiling streets. This round-trip tour starts and ends in Geneva, passing through the Swiss countryside on its way to Lausanne and Montreux. Along the way, you’ll stroll the Montreux Riviera, visit a resort associated with rock legend, Freddie Mercury, explore the Chillon Castle, and take a boat ride across Lake Geneva.
...  More
Booked by 17 travelers
From
US$522.87
Price varies by group size
From
US$522.87
Price varies by group size
Learn More

13
Experience the charm of Montreux on a full-day tour from Geneva. Soak up views of the Swiss countryside as you travel toward the city cradled by the Alps and Lake Geneva. Discover Corsier-sur-Vevey, the village around Chaplin’s World, a site dedicated to the artist Charlie Chaplin; see the magnificent medieval castle of Château de Chillon; and enjoy ample time to explore the sights of Montreux before making the return trip to Geneva.
...  More
From
US$166.27
From
US$166.27
Learn More

Bus round trip from Lausanne to Montreux

Take a day to explore the city of Montreux, famous for its jazz festival and all the artists who have felt good atmosphere.
...  More
From
US$50.20
From
US$50.20
Learn More

Programme: - 5 pm, meet in front of the main entrance of the Eurotel and departure by private bus to the vineyard of Lavaux. On the way, you will be able to admire spectacular views and discover the small typical wine-growing villages of the surrounding area. - Arrival at the estate, welcome aperitif and visit of the cellar by the owner of the premises. - Tasting of St-Saphorin wine in the company of the producer. - Exclusive gift for all participants. - Cocktail dinner composed only of fresh and seasonal products from the area. - Conferences and workshops by Peter Freestone on Freddie Mercury. - 10 pm, return by private bus to Montreux. Several drop-off points will be organised in the Vevey-Montreux region depending on the participants.
...  More
From
US$260.39
From
US$260.39
Learn More

Photogenic Montreux with a Local

This Experience is provided by a private local. Come with me to discover the city of Montreux through your camera lens! Join me on this city walk for the unique opportunity of experiencing the city from an insider’s point of view and taking stunning pictures of it at the same time! Our walk will take us from the statue of Freddie Mercury to the wonderful Castle of Chillon. While using your camera to capture the beauty of Montreux, you will also come across local spots and hidden gems that a typical tourist tour won’t show you. Let us discover an alternative side of Montreux, full of history and unique beauty! Don't forget to book the Experience at a suitable time to have the best light possible for the pictures! You cannot leave the city without having captured the beauty of the Gorges du Chauderon and getting to know everything about why Freddie Mercury and Charlie Chaplin fell in love with Montreux.
...  More
From
US$333.59
per group
From
US$333.59
per group
Learn More

Things to do near Montreux