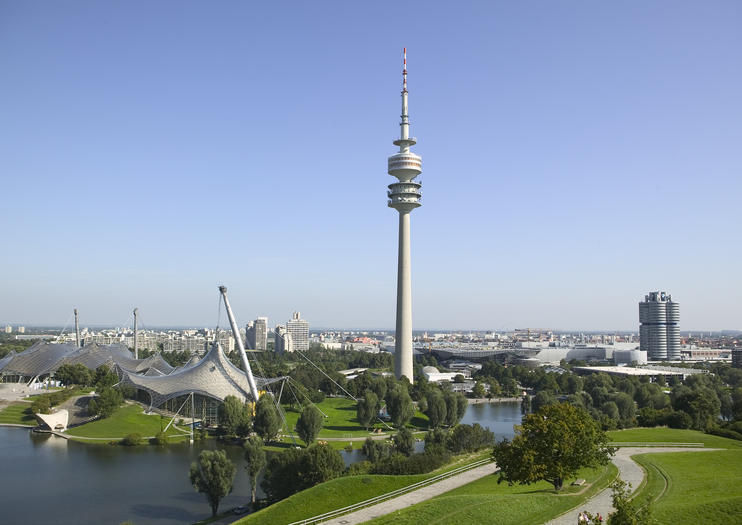 Towering a dizzying 291 meters over the surrounding Olympic Park, Munich’s Olympic Tower is one of the city’s tallest buildings and boasts its highest observation deck at 190 meters. Take the high-speed elevator to the top floor, from where the views span the city center and spread across the Alps from Salzkammergut to the Allgäu. It’s also possible to dine with a view at the 182-meter Restaurant 81, which offers 360-degree panoramic views from its revolving restaurant floor. Also at the top is one of Europe’s highest museums - a small rock ‘n’ roll museum, housing a variety of music memorabilia and occasionally hosting music concerts.

Built in 1968 to designs by Sebastian Rosenthal, the Olympic Tower is more than just a lookout point – constructed in time for the 1972 Olympic Games, the sky-high antenna rising from the top of the tower provides TV broadcasting for 6 million viewers, as well as providing digital TV for the entire southern region of Bavaria.
Address: Spiridon-Louis-Ring 21, Munich 80809, Germany
Hours: 9am - 12am Daily. Last ascending elevator at 11:30pm.
Admission: Adult: 5.50 EUR, Child: 3.50 EUR
Read MoreShow Less

981
Get acquainted with Munich the easy way on a fun, flexible hop-on hop-off city bus tour. Choose a 24-hour Express Tour to check out Munich’s main highlights or a 24-hour or 48-hour Grand Tour ticket to widen your sightseeing net. Either way, settle aboard an open-top double-decker bus, listen to the enlightening onboard commentary, and enjoy panoramic views of sites such as the Marienplatz, Hofbrauhaus, Viktualienmarkt and more. Hop off at the stops that interest you, explore on foot and then re-board the bus at any stop you wish.
…More
From
US$22.70
From
US$22.70
Face masks required for travelers in public areas
Face masks required for guides in public areas
Face masks provided for travelers
Learn More
Taking safety measures

131
See Munich’s night lights come to life, plus enjoy dinner at the famous watering hole Hofbräuhaus, on this private sightseeing tour. Munich is the capital of Bavaria and one of Germany’s most popular destinations. Start with a tour of the city’s popular squares, monuments, fountains, and buildings while they are illuminated for the evening. Then enjoy dinner and a show at Hofbräuhaus before traveling to the top of the Olympic Tower for a spectacular panoramic view of the city and a farewell drink.
…More
From
US$83.64
From
US$83.64
Face masks required for travelers in public areas
Face masks required for guides in public areas
Face masks provided for travelers
Learn More
Taking safety measures

Go on an unforgettable adventure and discover the beauty of Munich in the most unique way...from a private micro plane! You’ll see stunning views of Allianz Arena, English Garden...and many more for you to discover with a local pilot! Your pilot is key to this adventure. They are sharing the flights' direct cost, not making a profit. They just love to fly and want you to understand their passion for aviation. So be sure to meet your pilot directly at the airfield provided, as there are several private airfields around. ++Confirm weather conditions with your pilot before++ --> Access a local airfield --> Discuss the flight route together with your pilot --> Pre-flight check --> Up you go, enjoy the view from a whole new perspective! The flight can depart between 9-17h, depending on the availability of the pilot, aircraft, and weather. Please let us know your flexible hours/days upon booking, and make sure that you've been in touch with us beforehand!
…More
From
US$185.21
From
US$185.21
Face masks required for travelers in public areas
Regularly sanitized high-traffic areas
Gear/equipment sanitized between use
Learn More
Taking safety measures

Magical CHRiSTMAS MARKETS along the ROMANTIC ROAD from Munich to Rothenburg o.d.T.

Can the romance of the Romantic Road be surpassed? Certainly during the Advent season, when the Christmas markets open in the historic towns and in the glow of countless lights the scent of mulled wine & old Franconian specialities blows through the narrow lanes. Join us on this exclusive private day trip and let yourself be enchanted by the pre-Christmas flair of these medieval gems! In our new and comfortable VW Minivan, travel comfortably to the most beautiful places, let the Christmas magic take effect on you, and gladly determine the length of stay yourself. Your personal, professional, friendly and even Christmas-loving guide will always be at your side with advice & deeds and will also explain the history of the numerous sights. We offer 2 tour lengths, so you can also explore the absolute highlight of this trip extensively: the world-famous Rothenburg ob der Tauber! Image Credit see "Additional Info"
…More
From
US$473.17
Price varies by group size
From
US$473.17
Price varies by group size
Face masks provided for travelers
Hand sanitizer available to travelers and staff
Transportation vehicles regularly sanitized
Learn More
Taking safety measures

Munich Card (Group) with public transport: Save at attractions & tours!

1
Purchase a Munich travel card in advance for access to the top attractions and public transportation with a group of two people or more. Munch Cards are available for one to five days of validity, and can save your group tons of time standing in line to buy tickets at each attraction. The public transportation pass included with the card makes it easy to get around the city, and you'll also get discounts at local shops and restaurants.
…More
From
US$29.75
per group
From
US$29.75
per group

3
Combine entrance to more than 45 Munich attractions with public transportation access in a single purchase: the Munich City Pass. This all-inclusive pass is available in versions from one to five days, which means it fits every schedule and budget. Save time by not waiting in ticket purchase lines at many of the attractions, proceeding inside to begin exploring right away.
…More
From
US$53.65
From
US$53.65

Munich Card with public transport: Save at attractions & tours!

5
Buy your Munich card in advance for the utmost convenience and flexibility in sightseeing while you're in town. The card gives you access to all of the must-see museums and attractions, as well as full use of the city's public transportation system. The Munich card is available in anywhere from 1- to 5-day increments, so you can choose what's suitable for your budget and timetable.
…More
From
US$20.19
From
US$20.19