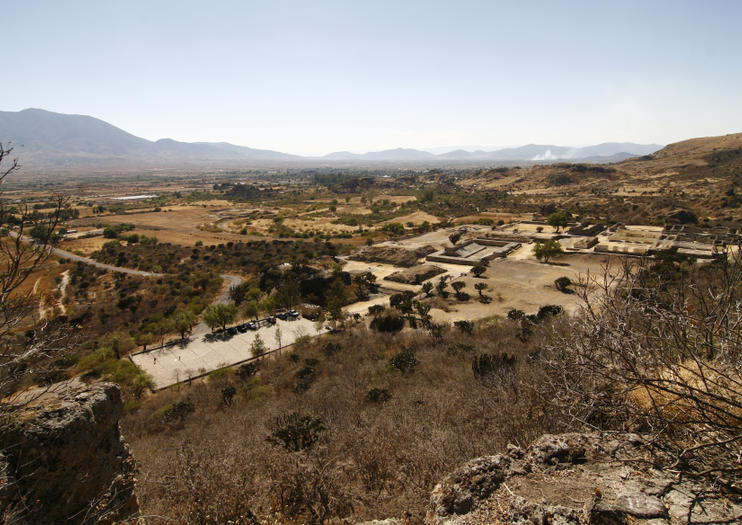 High on a cactus-studded plateau, the ruins of Yagul offer a view of Oaxaca’s Tlacolula valley. Yagul dates back to at least 500 AD, but most of the existing structures were built several hundred years later, after the decline of the nearby city of Monte Albán . When the Spanish arrived in Oaxaca, Yagul still had a population of 6000.

Due to the easy-to-defend location and fortifications, archeologists believe Yagul was a military center. Like the other major ruins in the area, the site was occupied at various times by both the Zapotecs and the Mixtecs. The ruins include the second largest ancient ball court in Mesoamérica, several typically creepy tombs, and a labyrinthine stone palace with six small stone courtyards.

Yagul is located 38 km southeast of the capital on Highway 190. Drive, take a taxi, or go to Oaxaca’s second class bus station (Central Camionera de Segunda Clase in Colonia Mercado de Abastos) and catch a bus to Mitla. Ask the driver to drop you off at Yagul. You’ll have to walk about a kilometer to the site.
Address: Oaxaca, Mexico
Hours: Tues-Sun 8am-6pm
Admission: 37 pesos; Free on Sundays
Read MoreShow Less

4 Tours and Activities to Experience Yagul

2
Explore the archaeological highlights of Oaxaca without getting lost on this day trip, a great choice for first-time visitors. Take a guided tour of Monte Alban, the largest Zapotec urban center and a UNESCO World Heritage Site, and visit its satellite city, Atzompa. Then travel to Yagul and Mitla to see other examples of Zapotec architecture. Plus, round-trip transportation from downtown Oaxaca is included.
…More
From
US$79.99
From
US$79.99
Face masks required for travelers in public areas
Face masks required for guides in public areas
Hand sanitizer available to travelers and staff
Learn More
Taking safety measures

This tour is ideal for those archeological lovers. Experience the essence of its two cultures: La Zapoteca and La Mixteca, both left a historical and cultural legacy that today can be breathed strongly in the identity of Oaxaca. We will visit the most important archeological sites in Oaxaca such as: Monte Alban, Atzompa (recently open to public), Yagul and Mitla. This tour is operated in private for your family and / or friends, in a comfortable vehicle according to number of passengers. You will be accompanied by a certified guide (Spanish - English) and driver. An advantage on private service is the freedom to move at your own pace without haste and enjoy every visited site. You will have enough time to take as many photos as you want, forget about waiting a big group. Enjoy your own tour. This is a special adventure that will let you carry incredible memories of your travel experiences and the magic of the Oaxacan roots and finally will recharge with a special energy.
…More
From
US$65.00
Price varies by group size
From
US$65.00
Price varies by group size
Face masks required for travelers in public areas
Face masks required for guides in public areas
Hand sanitizer available to travelers and staff
Learn More
Taking safety measures

We always have a driver and a Licensed Tour Guide in our tours, we never talk and drive at the same time. Forget about paying additional costs, in this tour everything is included, including local food & drinks. We have a Tourism National Register,we have a federal Licensed as profesional Tour Guide English, French or Spanish, we offer you a Traveler Insurance (when you are inside the car) we have a First Aids Certification. We ensure our full enjoyment by offering exciting opptunities including spontaneity and flexibility for exploring , shopping and time for reflexión. We bring together professionals and friendly staff with profound knowledge of each place that we visit. we are from Oaxaca.
…More
From
US$199.00
per group
From
US$199.00
per group
Face masks required for travelers in public areas
Face masks required for guides in public areas
Face masks provided for travelers
Learn More
Taking safety measures

Private Tour: On the Maïs Route

With Guide Oaxaca it is to have passion at your service, privacy at the heart of your stay and peace of mind as a guarantee. So you have no surprises: no visits to repay, no additional costs except tips and drinks and tickets to the places of the visits. We are qualified guides with in-depth knowledge of our region. Whether they are French or English speaking, our guides have passed the guide diploma and know their region inside out, not only the tourist sites, but also the local culture and history.
…More
From
US$129.00
From
US$129.00
Face masks required for travelers in public areas
Face masks required for guides in public areas
Face masks provided for travelers
Learn More
Taking safety measures

The answers provided below are based on answers previously given by the tour provider to customers’ questions.
Q:
What are Yagul hours of operation?
A:
Yagul hours of operation: Tues-Sun 8am-6pm. Buy tickets in advance on Viator. If you book with Viator, you can cancel at least 24 hours before the start date of your tour for a full refund.
Q:
What's the best way to experience Yagul?
A:
The best ways to experience Yagul are:See all Yagul experiences on Viator.

Things to do near Oaxaca