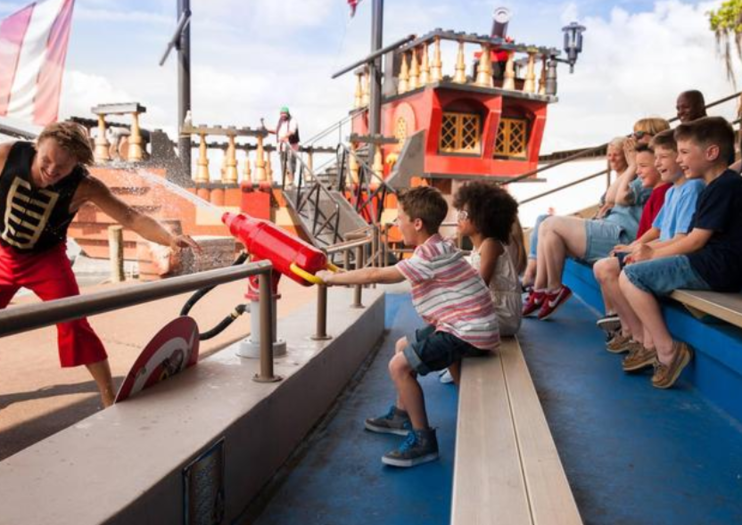 Orlando may be the theme park capital of the United States with half a dozen major parks and dozens of smaller attractions within them. Deciding how to spend your time in Orlando can be confusing—here’s what you should know.
Walt Disney World
This powerhouse park features an array of individual sites, and you can make the most of your time by purchasing a 4-day Magic Ticket, which includes a visit to one theme park each day.
Universal Orlando Resort
Universal Orlando encompasses three parks. Jump into the action of your favorite TV shows and movies at Universal Studios; encounter super heroes, dinosaurs and magical creatures at Islands of Adventure; and enjoy thrilling water rides at Volcano Bay. Don’t miss the Harry Potter–themed experiences at both Universal Studios and Islands of Adventure, and consider buying a multi-park pass to see as much as possible.
Legoland Florida
Everyone’s favorite building block comes to life at this interactive theme park perfect for families with kids ages 2 to 12. The park features more than 50 rides, mini-Lego cities, huge LEGO play areas, and a water park with a river where you can build your own raft out of Legos.
Fun Spot America
With locations in both Orlando and Kissimmee, Fun Spot America has all the traditional amusement park favorites: roller coasters, go-kart tracks, thrill rides, a midway, and an arcade with both classics and the latest games like Balloon Bust, Hot Shot, and Water Gun Fun. Your pass is redeemable at either location.
Read MoreShow Less
Orlando Tours & Activities (4)
Filter
•

259
Add some imagination and invention to your Florida vacation on a visit to LEGOLAND® Florida Resort. Breeze past the queue with your pre-purchased entrance ticket to get the fun started right away. The park features live interactive shows, wild rides, amazing characters, and lots of opportunities to build, climb, and play. Good times for the whole family!
...  More
From
US$94.99
From
US$94.99
Learn More

34
Go wild with some mind-boggling fun at WonderWorks Orlando. This admission ticket gives you fast-access to the attraction with your pre-purchased ticket. Revel in a full day of entertainment that brings together the scientific, the mysterious and the kooky. Choose your favorite activities from among 100 exhibitions, including earthquake simulators, a bubble lab, a gyro and more. Upgrade to the VIP Combo which includes the Outta Control Dinner Show..
...  More
From
US$36.20
From
US$36.20
Learn More

325
Dedicate a day to non-stop entertainment for the whole family at Fun Spot America! Choose from Fun Spot’s Orlando or Kissimmee locations, and enjoy the ease of free parking and fast access with your single-day pass. Fill your day with thrilling rides, go-karts racing and arcade games (own expense). Even the smallest family members with have options like the Kiddie Coaster and the mini fun house!
...  More
From
US$49.50
From
US$49.50
Learn More