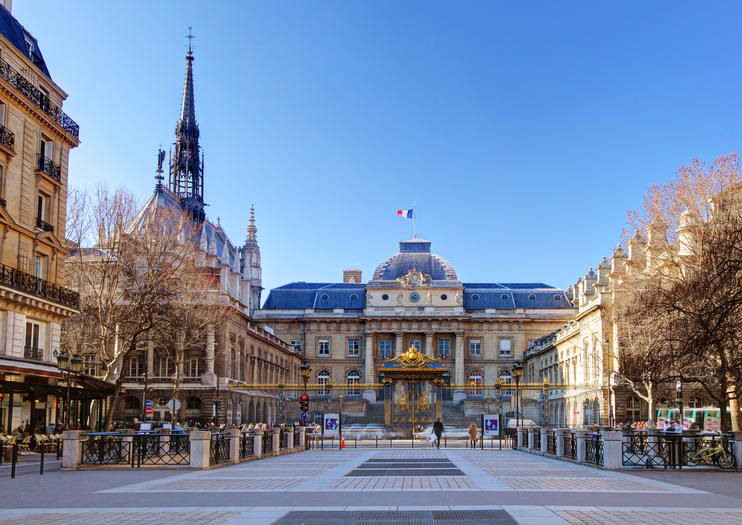 Located on Île de la Cité, one of the two remaining natural islands in the River Seine, the Palais de Justice is what remains of the former Royal Palace. Situated between the Gothic royal Sainte-Chapelle chapel and the former Conciergerie prison, the Palais de Justice is infamous for its role as a public execution site during the French Revolution.
The Basics
The former Royal Palace is now home to the Paris judicial courts. Since it’s a working judicial building, the building isn’t open for tours, but visitors are free to wander the public halls or just admire the stunning architecture from the outside. Opt for a walking tour the of Île de la Cité to learn more about the history of the Royal Palace and see other famous landmarks like the Conciergerie, Sainte-Chapelle, and the Notre-Dame cathedral.
Things to Know Before You Go
How to Get There
The Pont Neuf, Paris’s oldest bridge across the River Seine, provides access to Île de la Cité from the center of Paris. Metro line 4 will take you directly the island, and the Palais de Justice is only a few moments walk from the Cité station.
When to Get There
Attractions along Île de la Cité are some of the most visited in Paris, so start your morning early to avoid the crowds. There really is no bad time to visit Paris, but spring and fall see vastly smaller crowds than mid-summer, and winter can be a delightful time to visit as long as you pack plenty of layers.
Visiting the Conciergerie and Sainte Chapelle
Although tours of the Palais de Justice are unavailable, you can, in fact, tour neighboring La Conciergerie and Sainte-Chapelle. La Conciergerie is most notable as the principal prison during the French Revolution, when it was used to detain famous revolutionaries like Marie-Antoinette and Robespierre. Admission is required to enter both sights, but a combination ticket will save you money.
Address: 10 Boulevard du Palais, Paris 75001, France
Read MoreShow Less

601
Pedal through the City of Light on an evening bike tour. Follow your guide past Paris' top attractions, such as the Louvre, Notre Dame, and the famous Berthillon ice cream shop, and listen to commentary along the way. After a relaxing ride through the illuminated city, top off your tour with a cruise along the Seine paired with a glass of wine.
...  More
From
US$50.27
From
US$50.27
Learn More

511
Challenge your romantic illusions of Paris on a terrifying tour of the city’s most sinister spots. Delve into the eerie mysteries of the City of Light, strolling the serpentine streets in search of spectres and spooks; stray from the beaten path with a masterful story teller, discovering unfamiliar facts about the captivating capital as you venture to sites of reputed haunting. Gain fascinating insight into the horrible history of the city when you visit mystery-shrouded sites like the Place de la Vert Gallant and the Palais du Justice.
...  More
From
US$21.71
From
US$21.71
Learn More

6
Tick off some of Paris’ most iconic attractions, at your own pace, on this private walking tour of the City of Lights. Alongside your personal guide, you’ll head to one of Paris’ oldest districts, Île de la Cité, and explore the pristine Tuileries Gardens. Visit Place de la Concorde, home to the world’s first guillotine, admire the grandeur of Fontaine Saint-Michel, and delve into Paris’ turbulent history as you amble along the Champs Elysees, the world-famous boulevard that flanks the River Seine.
...  More
From
US$83.56
Price varies by group size
From
US$83.56
Price varies by group size
Learn More

36
Get to know the picture-perfect city of Paris on this private walking tour that comes with a fast-access entry ticket into the Louvre Museum. Starting on Île de la Cité, where the ancient city was born, your own guide takes you on a stroll along the Seine River and shares insight into many famous landmarks like the Notre Dame Cathedral and the Eiffel Tower. Next, it’s off into the Louvre, bypassing the long entrance lines, for a guided tour of world-class artworks including the ’Mona Lisa’ and ‘Venus de Milo.’
...  More
From
US$204.66
Price varies by group size
From
US$204.66
Price varies by group size
Learn More

110
Choose your distance: 6 km (4 m) or 10 km (6 m), and let's go! We’ll be chasing the sunrise on a gentle run (your pace), plunging you into an unexpectedly empty Paris. At this time of the day, most people are still sleeping and the rising sun colours the monuments and buildings with nuances of pink and gold. This is Paris as you’ve probably never seen before! We’ve carefully planned every step of this running tour for you to learn inside stories and fun facts, have a great time and work out before breakfast. You don’t have to lift a finger: only to move your legs! Some reasons for joining a RUNRUN TOUR: ✔️Get to know Paris from a top-class local runner, learning things that you can't find in a guide book ✔️We're "the glamping of running": Bottled water, healthy snacks and a waterproof running jacket in case of rain are provided ✔️Work out before breakfast, feeling free to earn later the calories burned ✔️Relax and don't worry about getting lost or planning a running route by yourself
...  More
From
US$49.12
Price varies by group size
From
US$49.12
Price varies by group size
Learn More

Welcome to the birthplace of Paris! Île de la Cité is where it all started. Join me on this tour as we explore the city's origins from a small settlement along the Seine River to how it grew into one of the most charming places in the world. We start with the love-lock bridge, move on to King Henri IV and the terrible demise of his murderer, the story of the last Grand Master of the Knights Templar, the Sainte Chapelle, as well as the story of Quasimoto and the beloved Notre Dame Cathedral. This is the perfect tour for Francophiles who want a taste of French history while enjoying a glorious stroll along the heart of Paris. Places to stop along the way include the Square du Vert Galant, Place Dauphine, Conciergerie, Sainte Chapelle, some stops around Notre Dame and finally the Deportation Memorial. The tour is ready whenever you are and the audio plays automatically at exactly the right time and place using your smartphone's GPS and the VoiceMap mobile app, which also works offline.
...  More
From
US$7.67
From
US$7.67
Learn More

Join Annie Sargent, tour guide and producer of the Join Us in France Travel Podcast, on tours of the three neighbourhoods she loves the most in Paris. She lived away from France for many years but returned eager to re-discover her own country and it's historic places. And because she's French born and raised she can't help but introduce a little bit of French culture into her tours. This package deal includes all three of her tours for less. So you get to explore Marais - the neighbourhood that has it all, Montmartre where all the artists go and Île de la Cité where Paris was born. What are you waiting for? Get walking and enjoy this tour with Annie today!
...  More
From
US$18.66
From
US$18.66
Learn More

13
Spend a delightful day in Paris discovering the world-famous attractions along the Seine River and the artistic masterpieces of the Louvre Museum. Follow you guide along the UNESCO-listed Seine riverbanks while learning the history of iconic monuments like the Notre Dame Cathedral, the Musée d'Orsay, the Jardin des Tuileries and the Eiffel Tower. Next, skip the long line at the Louvre and take a guided tour of museum highlights and lesser-known treasures. Numbers are limited for a personalized small-group experience.
...  More
From
US$204.66
Price varies by group size
From
US$204.66
Price varies by group size
Learn More

1
This full-day combo tour gives you a bit of everything and just enough to say you’ve been to Paris. On a walking tour, see sites of the Ile de la Cité, the Palace of Justice, and the Place Dauphine. After a leisurely 3-course lunch in the Latin Quarter, soak up panoramas from the 56th floor of Montparnasse Tower—which you enter with skip-the-line privileges. Then, step aboard a hop-on hop-off sightseeing bus and finish your time in Paris as you wish.
...  More
From
US$231.05
From
US$231.05
Learn More

2.5-Hours Walking Tour of Paris Highlights along the River Seine

Discover the rich history of France’s capital city with this small-group walking tour along the Seine. Over the course of 2 hours, you’ll pass impressive landmarks like Notre-Dame, the Louvre, Pont Neuf, the Tuileries Garden, the Eiffel Tower, and the Place de la Concorde. Learn the very human stories behind major historic events as your guide shares tales of Marie-Antoinette, Catherine de Medici, Ernest Hemingway, Victor Hugo, and more.
...  More
From
US$40.26
From
US$40.26
Learn More

19
Spin from Notre Dame Cathedral to the Eiffel Tower on this 3-hour sightseeing bike tour in Paris. Hop onto your bicycle at the Pompidou Centre in central Paris and take to the streets with a guide. Head out along the banks of the Seine River, then cross Notre-Dame Bridge onto the Île de la Cité as a guide sheds light on Paris’ colorful past. Take in top landmarks including the Eiffel Tower, the Louvre Museum and stop along the way to capture the city on camera.
...  More
From
US$41.80
From
US$41.80
Learn More