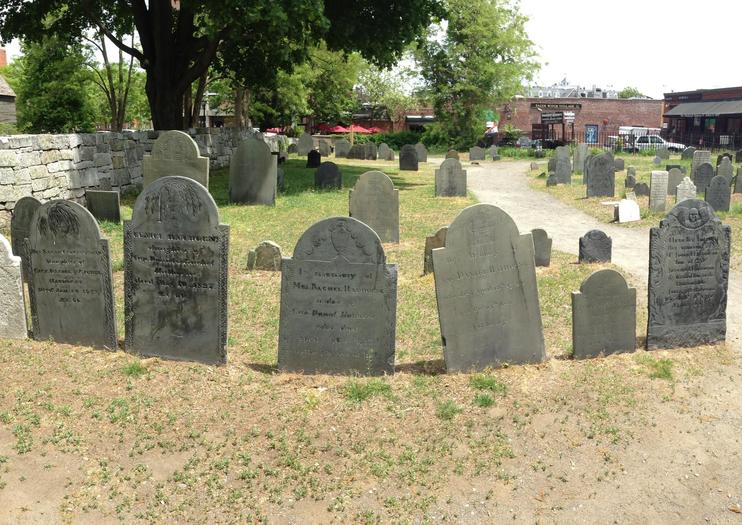 Please note: Old Burying Point (Charter Street Cemetery) will temporarily close for renovations during the spring of 2020.
Also known as the Charter Street Cemetery, the Old Burying Point of Salem is the second oldest burying ground in the United States. It is estimated to date back to 1637. Victims of the infamous Salem With Trials were convicted nearby to the site. Jonathan Corwin and Jonathan Hawthorne, who were both Salem witch trial judges, are also buried here.
As Salem was once a major shipping port for “the New World,” this cemetery is particularly historic. A Mayflower pilgrim, one of the first to enter the United States, was claimed to be put to rest here. The grave of former governor Samuel Bradstreet can also be found. The old tombstones remain in tact and uniquely carved from the 1600s, presenting a bit of history that has been preserved since that time. A visit is an opportunity to learn about colonial era history, including burial practices and the lives of some of the important figures laid to rest here.

The Old Burying Point cemetery is located on Charter Street in central Salem. It open from dawn to dusk and is free to visit. Visitors are asked to act respectfully.
Address: Charter Street, Salem, Massachusetts, USA
Hours: Dawn to dusk
Read MoreShow Less

858
Learn about the mysterious history of Salem on this guided walking tour of the city. Follow your local historian guide through Salem, listening to 400 years of history and admire the old architecture that dates back hundreds of years. For a spookier adventure, select the nighttime tour led by lantern light and find out the truth about the 1692 Salem Witch Trial hysteria.
…More
From
US$25.00
From
US$25.00
Face masks required for travelers in public areas
Face masks required for guides in public areas
Hand sanitizer available to travelers and staff
Learn More
Taking safety measures

30
Delve deeper into the haunted history of Salem on a daytime ghost tour that provides a family-friendly introduction to the city’s past. Exploring on foot guarantees a more intimate glimpse into the city streets and a cemetery, while a guide brings history to life using humor and stories.
…More
From
US$15.00
From
US$15.00
Face masks required for travelers in public areas
Face masks required for guides in public areas
Hand sanitizer available to travelers and staff
Learn More
Taking safety measures

1629
When night falls across Salem, it's the perfect time to explore the city’s spooky and sinister past on a haunted history tour. On this top-rated walk through one of America's most haunted places, follow a licensed guide along lamplit streets while listening to legends and true tales of witchcraft, murder, mayhem, and more. Visit sites related to the infamous 17th-century Salem Witch Trials, and hear about the ghostly spirits said to still rattle through the town’s historic homes and graveyards.
…More
From
US$26.00
From
US$26.00
Face masks required for travelers in public areas
Face masks required for guides in public areas
Social distancing enforced throughout experience
Learn More
Taking safety measures

141
Salem history from The Satanic Temple! Who the hell are we? Watch the documentary "Hail Satan?" on Hulu before booking and you'll get it! The most unique walking tour in Salem, free from supernatural or superstitious elements. Your tour guide is an expert in occultism, witchcraft, and a member of The Satanic Temple! Surprisingly very family friendly, but for weird families.
…More
From
US$25.65
From
US$25.65
Face masks required for travelers in public areas
Learn More
Taking safety measures

37
The history of Salem, the notorious site of some of the historical witchcraft trials, is shrouded in misconceptions. Unravel the mystery of the town's past on this ghost tour that takes you to all of the main haunted attractions in Salem while offering insight into the town's history through research and eyewitness accounts.
…More
From
US$23.62
From
US$23.62
Face masks required for travelers in public areas
Face masks required for guides in public areas
Social distancing enforced throughout experience
Learn More
Taking safety measures

5
This is a Smartphone Guided ghost tour on our walking tour app. Go to the Ropes Mansion, press play and put your phone in your pocket. From there you are guided turn by turn along the spooky streets of Salem. 1 purchase works on 4 smartphones. Once you unlock the tour it does not expire and can be taken anytime. This offers spooky narration, theatrically crafted and music infused tour you can take anytime. Contactless and social distance friendly. It's recommended to listen on headphones or earbuds. Also you can Listen on a bluetooth speakers or your phone speaker. What makes this tour special? -The spooky narrator is one of a kind. -This is not a fact dumping tour. It's a spooky adventure. -Go anytime. Go at your own pace -Great bang for your buck. Get the adventure for a fraction of the price of other tours.
…More
From
US$3.95
US$5.00
US$1.05 savings
From
US$3.95
US$5.00
US$1.05 savings
Face masks required for travelers in public areas
Contactless payments for gratuities and add-ons
Learn More
Taking safety measures

8
This Salem Day Tour is recommended for any guest who wants to learn the true history of the most sensationalized dark moments in Colonial American history. While being led by local, experienced and licensed guides, guests will see the famous & iconic historical sites of the Salem. This tour contains dark and serious history, and may not be suitable for very young children.
…More
From
US$25.00
From
US$25.00
Face masks required for travelers in public areas
Face masks required for guides in public areas
Learn More
Taking safety measures

1
Learn all about Salem’s highlights and history—and see the city at its most atmospheric when you explore in the middle of winter—on this introductory walking tour. Bundle up and meet your guide in central Salem. You’ll learn about the town’s infamous Witch Trials, will visit its cemetery and Witch House, will see highlights like the Old Town Hall, and will even learn about supposed hauntings and spooky happenings.
…More
From
US$15.00
From
US$15.00
Face masks required for travelers in public areas
Face masks required for guides in public areas
Hand sanitizer available to travelers and staff
Learn More
Taking safety measures

Things to do near Salem