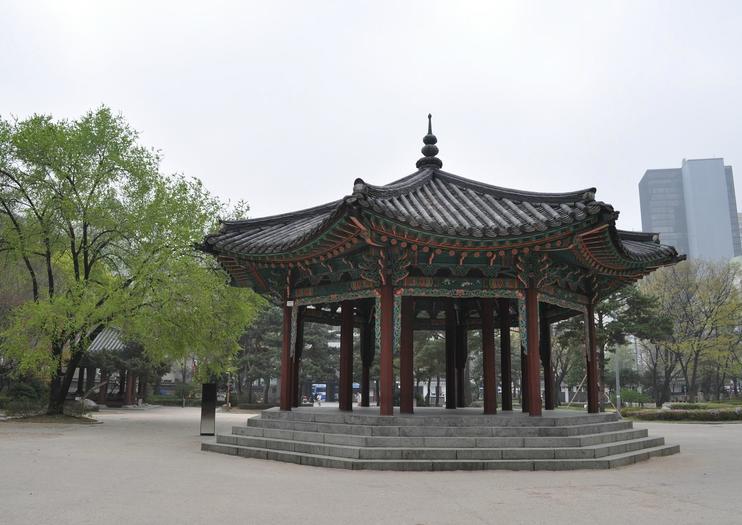 Formerly known as Pagoda Park, this small public gathering place was once the home of a Buddhist temple and still holds an important place in Korean history. This significance dates back to the March 1 Movement, part of the nation’s push for independence from Japanese rule, which began here in 1919.

The Basics
Despite its historical significance, Tapgol Park tends to remain under the radar of most visitors to the South Korean capital. Since few tours include the site, it’s often a quiet spot to get some fresh air and learn a bit more about Seoul’s history. Those with an interest in the supernatural or spooky can visit as part of an evening ghost tour, as the park was purportedly the site where jilted lovers once took their own lives.

Things to Know Before You Go
How to Get There
To reach Tapgol Park, take the Seoul Subway to Jongno 3(sam)-ga Station (lines 1, 3, and 5) and leave through exit 1. The park is about five minutes away on foot.

When to Get There
The best time to visit the park is in the morning or late afternoon in summer, when temperatures are cool, or anytime during the autumn and spring months.

Remnants of a Buddhist Past
This park, the first of its kind in Seoul, was built in 1897 on the grounds of the Wongaksa Temple, which had been destroyed by fire in 1504. All that remains of the temple is a 10-tier marble pagoda covered in intricate carvings. You’ll find it encased in a glass box toward the back of the park. Murals behind the pagoda depict moments from the March 1 Movement.
Address: 99 Jong-ro, Jongno-gu, Seoul, South Korea
Read MoreShow Less

159
See a spirited side of the South Korean capital you won’t find in the tourism brochures on this evening ghost tour in Seoul. Follow your guide on a meandering walk through Seoul’s hidden alleyways and hear tales to send shivers down your spine! Visit Gyeonghuigung Palace, the most haunted place in South Korea, discover hidden secrets in Pimatgol Alley, explore the birthplace of Korean independence at Tapgol Park and more.
…More
From
US$37.95
Price varies by group size
From
US$37.95
Price varies by group size

Let’s Roam is the #1 app-led scavenger hunt company. Walk to all the best landmarks and hidden gems, answering trivia questions and solving challenges. Work with your team or compete against them, as you learn new facts and create memorable experiences. Let’s Roam Scavenger Hunts are great as an everyday activity, or for bachelorette parties, birthday parties, corporate team building events and more! Each player chooses an interactive role, with challenges varying by person.
…More
From
US$12.31
From
US$12.31

The Dark Side of Seoul Walking Audio Tour by VoiceMap

Murder! Ghosts! Sex! This is the side of Seoul that you won’t find in the tourism brochures. Take a self-guided GPS audio tour down the dark alleys of the forgotten 600-year history of bloody massacres, seedy hideaways and mourning ghosts. Stops on this tour include the following: the site of a gruesome massacre, the bridge whose stones tell a dark story that lovers and passersby know nothing about, and a neighborhood known to be occupied by the spirits of prostitutes who met grisly ends. Along the way we regale tales of Seoul’s famous ghosts and murderers, weird and surprising landmarks, and the ancient city’s scandalous secrets. There will be an opportunity to buy refreshments. Children under 18 should not take this tour. It involves violent stories, sex jokes and a foul-mouthed tour guide. The tour is ready whenever you are and the audio plays automatically at exactly the right time and place using your smartphone's GPS and the VoiceMap mobile app, which also works offline.
…More
From
US$6.22
From
US$6.22

Things to do near Seoul