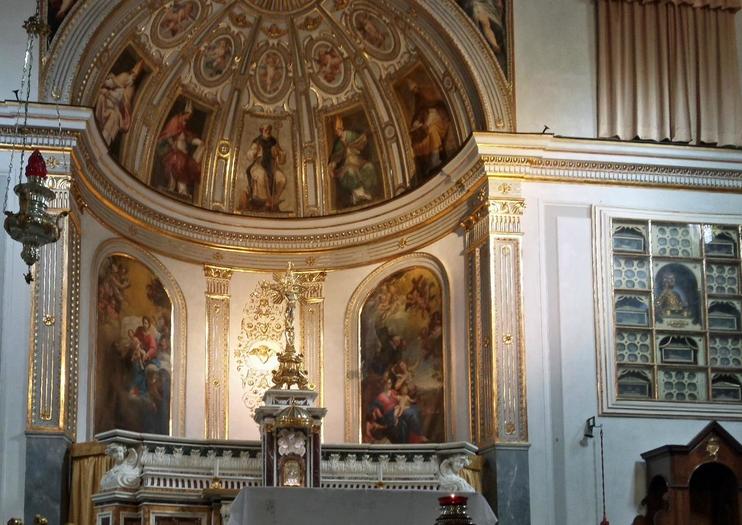 The most important church in Sorrento, the St. Anthony Basilica (Basilica di Sant’Antonino) is dedicated to the town’s patron saint. Visit the church during a walking tour of the city to view the sumptuous interiors, St. Antonius’s crypt, and votive offerings of sailors who survived shipwrecks thanks to the intervention of this saint, the patron of rescues.
The Basics
The original Basilica di Sant’Antonino was built in the 11th century, but numerous changes have been made over the centuries, including the addition of a baroque interior and Renaissance facade and belltower.
The best way to visit the church and explore Sorrento’s other top attractions is by joining a small-group walking tour. Wander the picturesque lanes lined with artisan workshops and boutiques and visit the Basilica di Sant’Antonino as well as the Church of San Francesco, Corso Italia, and Piazza Tasso. Sorrento is also a popular day-trip destination from Naples and the Amalfi Coast.
Things to Know Before You Go
How to Get There
The Basilica di Sant’Antonino is located along the main street, Corso Italia, in the center of Sorrento. From Marina Piccola, you can either walk up the hill or take a local bus or taxi. The city's transport hub is Piazza Tasso, just a short walk from the basilica, where buses connect to the Amalfi Coast, Pompeii and Herculaneum, and Naples.
When to Get There
The Basilica di Sant’Antonino is particularly interesting to visit on February 14, when the town celebrates the saint’s feast day with religious services and processions. The church also offers a cool respite from southern Italy’s midday heat in the summer.
Legends of Sant’Antonino
Most statues of St. Antonius depict him standing on a sea creature, representing his rescue of a child who had been swallowed by a whale; the two whalebones displayed in the church are said to come from this very creature. Another legend says that the Archangel Michael appeared to Antonino and told him to build a church in Sorrento. In the 11th century, this ancient chapel was replaced with the current basilica, though St. Antonius’s crypt inside was rebuilt in the 18th century.
Address: Piazza Sant'Antonino, Sorrento, Campania 80067, Italy
Read MoreShow Less

3
Explore the gateway to the Amalfi Coast on this 2-hour small-group walking tour of Sorrento. Follow your guide around lively Piazza Vittoria and Tasso Square, get a sense of local life as you stroll around the fishing harbor where Sophie Loren played her first movies and take in the views from the public gardens. Along the way, admire landmarks like the Sant'Antonino Church and the San Francesco Cloister, and marvel at the spectacularly situated Valley of the Mills. Set out to explore the town historic center and you will not miss to stop for a Neapolitan Espresso, pastries and home made ice cream. Along the way, listen as your guide fills you in on Sorrento’s fascinating history and heritage, and end your tour with an intimate knowledge of the resort town.
...  More
From
US$52.66
From
US$52.66
Learn More

Take a walking tour through the charming city of Sorrento, known for its sweeping views of the Bay of Naples. A local guide shows you the highlights of the city including Tasso Square, Church of Sant'Antonino, and other notable sites. You will also visit Valley of the Mills, an unusual but lovely scene where nature is reclaiming an ancient water mill.
...  More
From
US$147.18
Price varies by group size
From
US$147.18
Price varies by group size
Learn More

Enjoy the tour in a small group of a maximum of 20 people or decide to enjoy it in a private way with your private guide and your private pizza lesson. Discover the beautiful town of Sorrento in a small group on this 2 hours walking tour with a local guide. Follow your guide around the Tasso Square, admire the Sant'Antonino Church and the San Francesco Cloister, and marvel at the spectacularly ancient Valley of the Mills. Get a sense of local life as you stroll around the old fishing village of Marina Grande and enjoy the stunning view of the Neapolitan Riviera from the breathtaking viewpoints. In the little alleys of Sorrento, you could appreciate the local art crafts such as the inlaid woodworks and the famous Sorrento sandals.
...  More
From
US$78.10
Price varies by group size
From
US$78.10
Price varies by group size
Learn More

Things to do near Sorrento