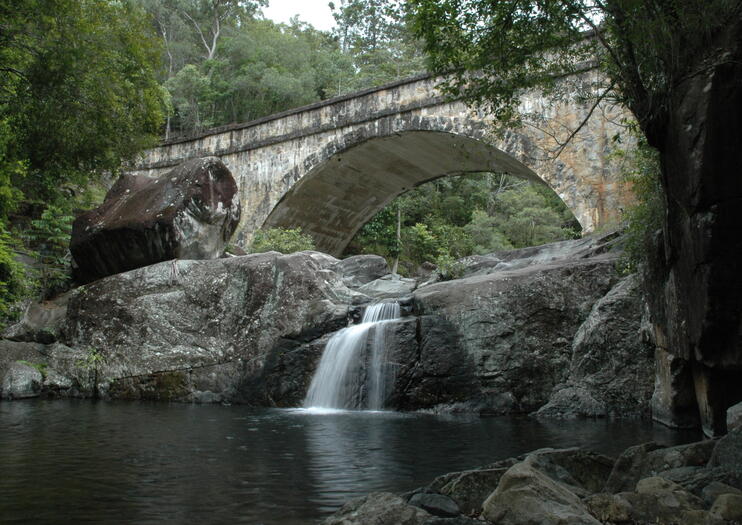 In the language of the local Nywaigi Aboriginal people, the Paluma Range is known as Munan Gumburu, or “misty mountains”—a fitting name for a place largely made up of dense rain forest with frequent atmospheric fog, especially in the morning. Travelers head to the park to hike, swim, and see the waterfalls.
The Basics
Paluma Range National Park sits in the southern part of Queensland’s Wet Tropics World Heritage Area, which also includes Daintree, Barron Gorge, and Wooroonooran national parks. Extensive hiking trails run through both the northern and southern sections of the park, and you’ll find plenty of spots to swim, check out the views, or enjoy a picnic. Most travelers visit independently while staying in the Townsville area.
Things to Know Before You Go
How to Get There
Paluma Range National Park is best reached by private vehicle—follow the Bruce Highway north out of the city of Townsville. The park’s Jourama Falls section is around 56 miles (90 kilometers) from Townsville, while the Mt. Spec section is about 38 miles (61 kilometers) away.
When to Get There
You can visit the park year-round, but tropical Queensland has two distinct seasons: the wet and the dry. During the wet season (October through May), expect the forest to be even damper than it is in the dry season. Some trails may be slippery, and swimming could be dangerous.
Girringun National Park
The Paluma Range National Park is on the southern edge of a string of connected national parks spanning hundreds of miles up Queensland, just inland from the coast. If you’re traveling north from Townsville, you can enjoy more of these parks en route. Accessible from the town of Ingham, the next park up from Paluma is Girringun, with several waterfalls, a mountain to climb (Mt. Fox), and walking trails.
Address: Crystal Creek QLD 4816, Australia
Read MoreShow Less