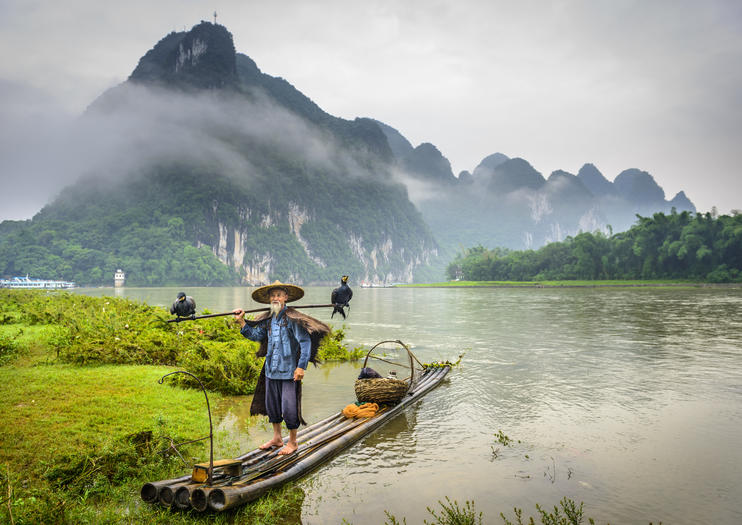 The lazy Yulong River winds through the heart of Baisha Ancient Town, a village dating back over 1,000 years set amid the spectacular karst landscape of the Guilin and Yangshuo area. In addition to occupying one of the most scenic points on the Yulong River, the town is known for its kumquats, exported throughout China.

The Basics
Baisha Ancient Town makes for a leisurely escape from Guilin or Yangshuo (or a stopover when passing between the two). Bamboo rafting trips along the Yulong River depart from beneath the town’s main bridge, while photographers choose this spot to capture images of fisherman using  cormorants to catch their dinner. Market days in the village bring farmers from the surrounding countryside to sell their fresh fruit and vegetables—it’s one of the largest rural farmers markets in the area.

Things to Know Before You Go
How to Get There
Baisha Ancient Town is located about 5 miles (8 kilometers) outside Yangshuo on the road to Guilin. Most people head there on a bicycle via the bike path along the river, but it’s very easy to take the bus from Yangshuo’s bus terminal or a taxi.

When to Get There
Baisha is at its most photogenic between mid-April and May, when locals are growing rice in the surrounding fields, or come late July and early August during the harvest. If possible, try to visit on a market day, held on days ending in 1, 4, or 7 each month.

The Fruits of Yangshuo
While Baisha Ancient Town is most famous for its citrusy kumquats, the market brims with excellent produce from around the region. Visitors should try the kumquats, as well as sweet pomelos, Valencia oranges, mandarins, persimmons, and chestnuts, all grown locally.
Address: Yangshuo 541902, China
Read MoreShow Less

Things to do near Yangshuo