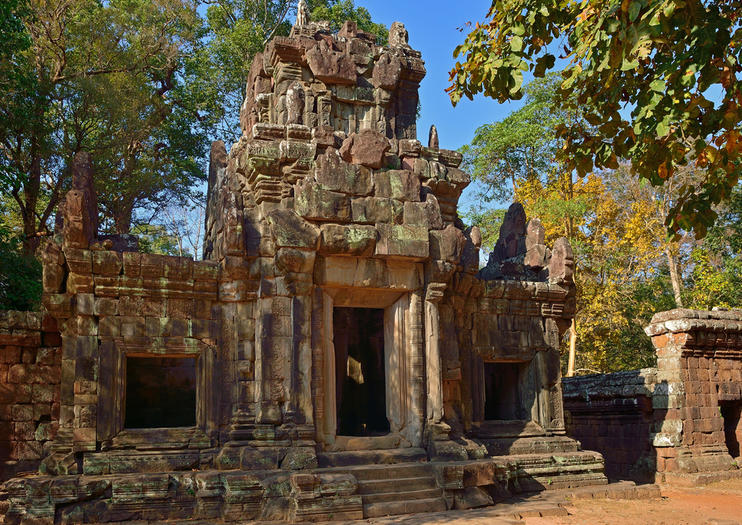 For about 500 years, a wooden palace stood near the center of the city of Angkor Thom, the former capital of the Angkor Empire. Today, a large walled area called the Royal Enclosure (or Royal Palace) is all that remains. It houses two bathing pools and the Phimeanakas, a small pyramid temple.

The Basics
Historians believe that the original building was built from wood, rather than stone, because it was not meant for religious observation. See the Royal Enclosure while visiting the rest of Angkor Thom, a 2,470-acre (1,000-hectares) area that includes the Bayon temple, which sports large, enigmatic faces; the beautifully carved Terrace of the Elephants and Terrace of the Leper King; and Baphuon, an 11th-century “temple mountain.”

Admission to Angkor Thom (and the Royal Enclosure), is included in an Angkor Pass, which is available in 1-day, 3-day, and 7-day versions (multi-day passes don’t have to be used on consecutive days).

How to Get There
The Royal Enclosure sits just northwest of the Bayon temple, the focal point and center of the city of Angkor Thom. Angkor Thom is about 7 miles (11 kilometers) north of Siem Reap and about a mile north of the main Angkor Wat temple complex. There’s no public transportation, so most travelers join a tour or book a private driver or guide.

When to Get There
Angkor Thom is open from early morning to late afternoon seven days a week, and the Royal Enclosure is one of the less visited areas in the complex. If you arrive early in the day, hit the popular sites first, then explore the palace area.

What Was the Angkor Royal Palace Like?
The palace the Royal Enclosure surrounded was likely first built in the 10th century, before Angkor Thom was built. While it would have been constructed and reconstructed several times, it seems to have been fortified and surrounded by a moat. In addition to the king’s quarters, the palace likely contained structures to house the king’s guards, wives, concubines, and servants. The pools might have been used for bathing, rituals, or even sports.
Address: Krong Siem Reap, Cambodia
Admission: Varies
Read MoreShow Less

Things to do near Angkor Wat