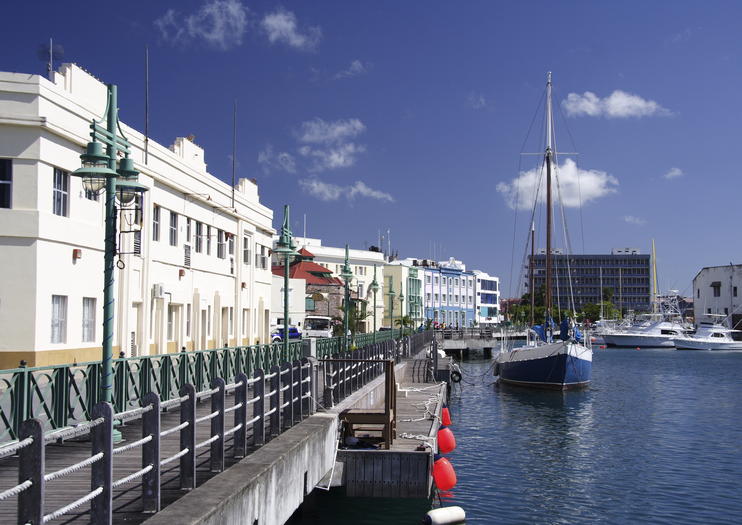 The first stop for many visitors to Barbados, Bridgetown Cruise Port (Deep Water Harbour) is just outside of Bridgetown, the country's capital city. Every cruise ship docking at the island anchors here, and there can be up to eight ships in port at the same time. With duty-free shopping and tourist information, it’s a useful stop for visitors.
The Basics
Bridgetown, on the southwest of Barbados, is home to the cruise port that is just a short walk to town along a well-marked boardwalk. Often referred to as “Little England,” Barbados embraces many British traditions, including a love of cricket, afternoon tea, and even driving on the left-hand side of the road. Added to this is the island’s own Caribbean flair, making for a unique atmosphere that attracts visitors from around the globe.
For many, the Bridgetown Cruise Port is their introduction to the island. With stores (including duty-free jewelry boutiques and shops selling local crafts), bars, and cafés, people often find their feet here before heading out on a guided tour of the island’s many attractions, which often depart from the terminal. Tours include visits to sites like Harrison's Cave, Bathsheba beach, Welchman Hall Gully, and Carlisle Bay. Or, take a sightseeing cruise or snorkel trip to see sea turtles and shipwrecks.
Things to Know Before You Go
How to Get to Bridgetown from the Bridgetown Cruise Port
The cruise port is located a mile outside of Bridgetown proper. Visitors can walk into town along the boardwalk (around 20 mins), or take a shuttle bus or taxi from the port.
Port Information
The cruise port is the first stop for many visitors to the island, but the terminal’s shops and cafes are open to anyone who wants to see the huge ships up close. Most stores are open 8:30am-4:30pm on weekdays, and 8:30am-1pm on Saturdays. Shops are often closed on Sundays.
Address: Princess Alice Highway, Bridgetown, Barbados
Read MoreShow Less

Things to do near Barbados