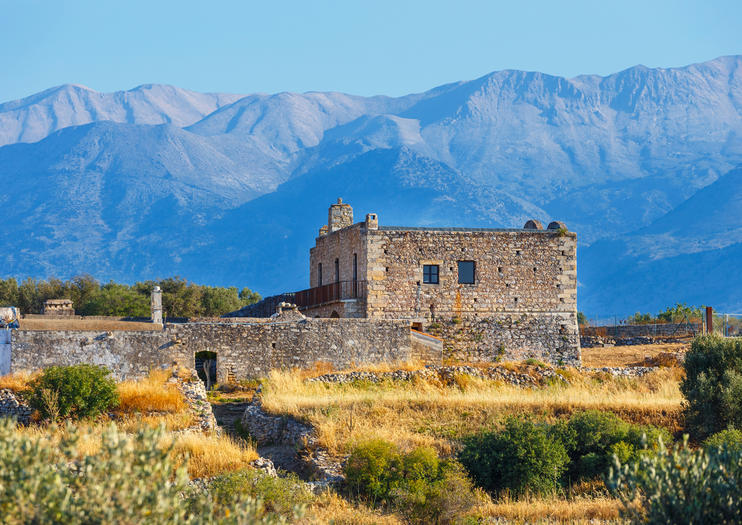 The vast archaeological site of Aptera lies on the northwest coast of Crete, 20 minutes from the charming seaside town of Chania. Believed to date back to the 14th century BC, Aptera was a powerful ancient city with its roots in Minoan times.
From its all-powerful position high on a plateau overlooking Souda Bay, Ancient Aptera had its own currency and thrived for millennia as a trading post with two natural harbors. Its eventual downfall came in the 7th century AD, when the city-state was repressed by Arabs and then destroyed by earthquake. It fell into long decline and lay undiscovered until Nazi troops occupying Crete during World War II started to excavate the site in 1942. Work still continues, and slowly the remains — dating from Minoan, Greek and Roman times — of an aqueduct, cisterns, public baths, temples, graves, houses, palaces and a small hillside theater have resurfaced, all cradled inside a protective walls that stretches for 2.5 miles (4 km).
Surrounded by olive groves and sleepy villages such as Maheri and Arhanes, where traditional rural life creeps on as it has for centuries, Ancient Aptera is one of the most important archaeological sites on Crete but — wrongly — flies under the tourist radar. As the hordes head for Knossos, Aptera is often relatively deserted.
Close by is the austere Itzedin Fortress, overlooking Souda Bay and built by the Turks in 1866-69 to crush the Cretan Revolution. The Aptera ruins can be visited on day trips from Heraklion or Rethymnon, and explored as part of a half-day walking tour of Arhanes and its environs; the views of the snow-capped White Mountains are spectacular in spring.

The answers provided below are based on answers previously given by the tour provider to customers’ questions.
Q:
What are Ancient Aptera hours of operation?
A:
Ancient Aptera hours of operation: Apr–Sept Tue–Sun 8:30am–7:30pm; Nov–Mar Tue–Sun 8:30am–3pm. Buy tickets in advance on Viator. If you book with Viator, you can cancel at least 24 hours before the start date of your tour for a full refund.