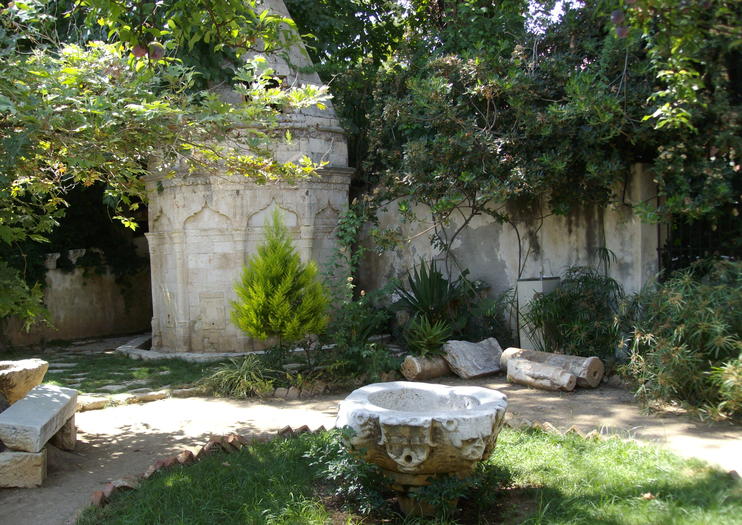 Tucked behind the façade of the former Venetian church of St Francis, the Archaeological Museum of Chania can be visited as part of an electric Trikke tour of its charming Old Town. Displays cover the periods from Neolithic and Minoan to late Roman times, and exhibit treasures found during excavations around the town and across western Crete.
The collections are elegantly displayed under the soaring vaulted ceiling of the church’s nave and include models of ships, clay seals, battered Classical statuary and a bust of Emperor Hadrian. Highlights are a bird-shaped Minoan drinking vessel dating from 3000-2300 BC; gold discs from a Neolithic burial site, thought to be from the 9th century BC; an almost-complete mosaic of Dionysos and Ariadne, which was uncovered during building work in Chania and dates from the 3rd century AD; and a charming clutch of carved animals. The Mitsotakis Collection, donated to the museum in 2000, is also on display and encompasses Minoan pottery and jewelry.
The Turkish Fountain in the courtyard outside the museum originally stood in Eleftherios Venizelos Square down by Chania’s Venetian harbour.

Open Tue–Fri 8am–7pm; Sat–Sun 8.30am–3pm. Admission for adults is €2; seniors, students and children is €1. The museum is best reached on foot in the pedestrianized old town. Chania can be reached by daily ferry from Piraeus in Athens, and by plane via Chania International Airport, which is 9 miles (14 km) from the town center.
Address: 28 Halidon Street, Chania, Crete 731 00, Greece
Hours: Tue–Fri 8am–7pm; Sat–Sun 8.30am–3pm
Admission: Adults: €2; Seniors, Students and Children: €1
Read MoreShow Less

0 Tours and Activities to Experience Archaeological Museum of Chania

The answers provided below are based on answers previously given by the tour provider to customers’ questions.
Q:
What are Archaeological Museum of Chania hours of operation?
A:
Archaeological Museum of Chania hours of operation: Tue–Fri 8am–7pm; Sat–Sun 8.30am–3pm. Buy tickets in advance on Viator. If you book with Viator, you can cancel at least 24 hours before the start date of your tour for a full refund.