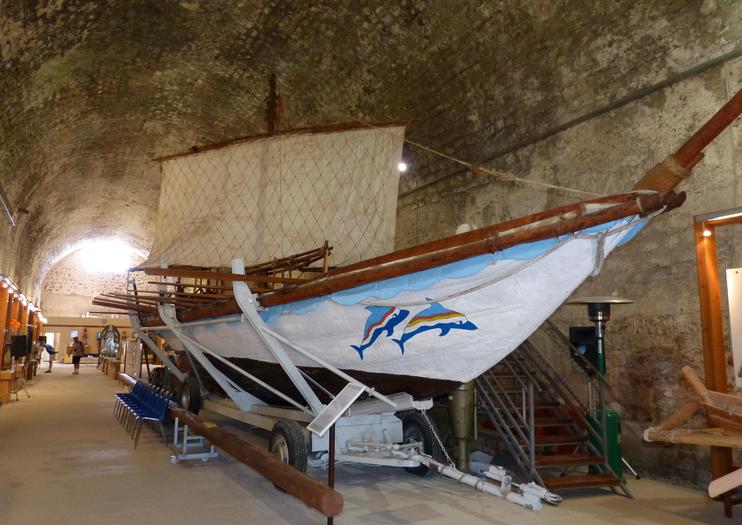 The Firkas Fortress at the entrance to Chania harbor was built during the Venetian occupation of Crete between 1204 and 1669; it was originally used as a barracks and prison. Since 1973, it has housed the Maritime Museum of Crete (sometimes translated as the Nautical Museum of Crete).
Spread over two floors of the Maritime Museum are 13 chronological displays starting with models of ships from Prehistoric times, passing through ancient navigational equipment, and ending with models of destroyers and landing craft from Greece’s modern-day naval fleet. Highlights along the way include plunder from ancient shipwrecks, such as amphorae and cooking utensils; reproductions of Minoan galleys; a Bronze Age trireme; and a model bridge from a World War II torpedo boat. A section is also given over to the German invasion of Crete in 1941, illustrated with photographs and personal testimonies.
The museum offers a small exhibition of shells showcasing the diversity of Mediterranean sea life and a well-stocked library of maritime books. A visit to the museum is easily combined with a walk around Chania’s Venetian Harbour or can be visited as part of an electric Trikke tour of its Old Town.

Open Apr–Oct daily 9am–4pm; Nov–Mar daily 9am–2pm. Admission for adults is €2; students is €1; children less than 6 go free. The Maritime Museum is best reached on foot although there is some parking in the area. Chania can be reached by daily ferry from Piraeus in Athens, and by plane via Chania International Airport, which is 9 miles (14 km) from the town center.
Address: Akti Kountourioti, Chania, Crete, Greece
Hours: Apr–Oct daily 9am–4pm; Nov–Mar daily 9am–2pm
Admission: Adults €2; Students €1; Children less than 6 go free.
Read MoreShow Less