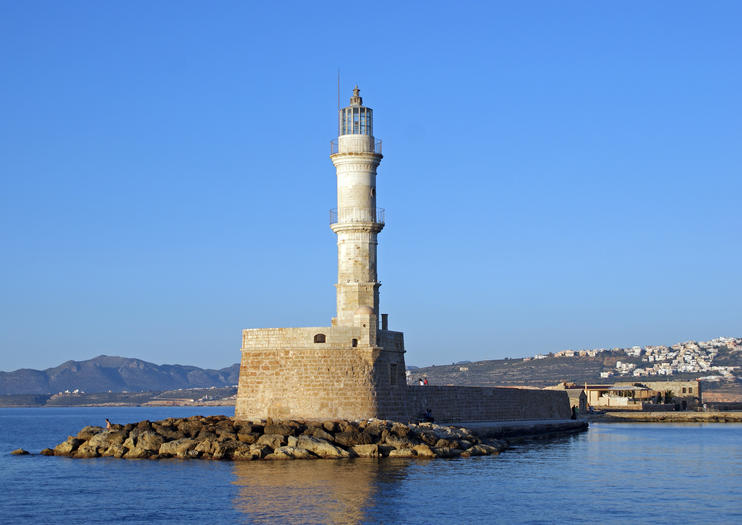 Perching on the end of the breakwater, the Venetian Lighthouse is the most striking of all the buildings around Chania’s imperious Venetian Harbour, and was constructed around 1570 when the town was under control of the Republic of Venice. It is one of the oldest lighthouses in the world and its spindly, butter-colored stone tower stretches up 69 feet (21 m) high. Last renovated in 2006, the tower was modified several times in the intervening centuries, gaining the mini-minaret above its light in 1839, when Ottoman Turks occupied Crete.
Although it’s no longer operational and closed to the public, the lighthouse is the landmark building in Chania and has an unusual three-part construction; its base has eight sides and its middle section has 16, while its upper reaches are circular. There’s an enjoyable stroll along the walls of the Venetian Harbour to admire its spectacular architecture and this is a romantic spot to linger when it’s illuminated after dark; better still, enjoy the view over an ouzo in one of Chania’s many harbour-side tavernas.

It’s slightly less than a mile (1.5 km) to walk to the lighthouse around the harbour walls. Chania can be reached by daily ferry from Piraeus in Athens, and by plane via Chania International Airport, which is 9 miles (14 km) from the town center.
Address: Eleftherios Venizelos Square, Chania, Crete, Greece
Hours: Closed to public
Read MoreShow Less

This excursion brings us to West Crete and our first stop in Chania, the most ravishing city of Crete. It was an important Minoan city and the “mother of the Cretan cities”, according to ancient writers. The city is divided in the Old City, with the gorgeous harbor and the New City, beyond its Venetian fortifications.
...  More
From
US$46.04
From
US$46.04
Learn More

2
Chania’s Old Town is being inhabited since the ancient ages of the Minoan Civilization from 5000BC. Since then it has always been a vivid place of prosperity and growth, influenced through the ages by the various cultures, Romans, Arabs, Jews, due to its geopolitical place in the Mediterranean Sea and those who invaded it particularly in the late years, such us the Venetians and the Ottoman Turks. We will stroll through the historic alleys and pinpoint the Byzantine and the Venetian/Ottoman Walls and Fortifications, then walk through the main streets and see the emergence of history from the Ancient Ages from the archeological excavations inside the Old Town to the Medieval and Recent Ages through the old buildings, the churches, the synagogues and the mosques. Also we will visit the Orthodox, the Muslim and the Jewish Quarter and how people lived together through times with peace or turbulence. There is an optional wine tasting for 30 minutes, 12 euro per person.
...  More
From
US$389.58
per group
From
US$389.58
per group
Learn More

Do you want to end your day in Chania in an exceptional way that highlights all your senses? SEAze the Day provides an experience that you’ll remember for a lifetime. Sailing the sea just before sunset for a couple of hours. You’ll have the chance to taste an assortment of delicious Cretan cheese and fruit along with wine. Enjoy the sunset, take a few photos, relax on board and experience a taste of fine Cretan products. The perfect surprise for your loved one!
...  More
From
US$402.85
per group
From
US$402.85
per group
Learn More

Discover Crete and its surrounding islands. Experience the Mediterranean sea, just like us Greeks! We are a group of experienced skippers who joined together in a mission of introducing travellers to the world of Greek seas and hospitality. We offer snorkelling equipment free. ***ASK US FOR MORE DESTINATIONS AND EXPERIENCES***
...  More
From
US$264.73
per group
From
US$264.73
per group
Learn More

In this unique tour we will have a thoroughgoing exploration of Chania area, exploring the rich history of Chania Old Town, combined with admiring the drive crossing a gorge, alongside with the beautiful countryside and the mountains, and an amazing gastronomical experience. We will walk through the narrow streets of Chania and enjoy centuries old buildings through the Venetian and Ottoman era. We will visit the traces of the Minoan civilization dating back to 3000BC and the remains of the Byzantine rule. I will narrate you Chania’s history and monuments and take panoramic pictures of the Old Town. We will continue driving through the gorge, picturesque villages and marvelous landscapes while I will pinpoint interesting things and talk you through Cretan culture and history. A stop will be made for an hour and a half in a restaurant to enjoy a meal cooked only on wood fire. Finally we will drive back through a panoramic windy road with spectacular views of Chania and Souda bay.
...  More
From
US$507.63
per group
From
US$507.63
per group
Learn More

The Delicious Chania Food Tour invites you to discover a different side of the town of Chania by joining the Cretans in what is probably their favorite activity: easting!! An alternative walking tour in the Old Town exploring Chania's cultural identity ; a great introduction to this beautiful town with a local insider guide and definitely one of the best things to do in Chania on your first day, ideal also for those visiting Chania on a cruise for just a day.
...  More
From
US$92.08
Price varies by group size
From
US$92.08
Price varies by group size
Learn More

Fish and Wine Dinner on a boat, Chania

Do you want to end your day in Chania in an exceptional way that highlights all your senses? SEAze the Day provides an experience that you’ll remember for a lifetime. Sailing the sea just before sunset for around three hours. You’ll have the chance to taste an assortment of two delicious Cretan wines. Along with the wine we will cook fresh fish for you on board of our boat. Enjoy the sunset, take a few photos, relax on board and experience a taste of fine Cretan food. The perfect surprise for your loved one!
...  More
From
US$575.50
per group
From
US$575.50
per group
Learn More

5
Chania City - Falassarna Beach The City of Chania is the first destination of our trip. You will have 3hrs of free time to explore the city. Chania is famous for its diverse cultural heritage, archeological ruins, classical buildings and fascinating history. The Old Town is the heart of Chania. It is perfectly formed by narrow labyrinth like alleyways and buildings dating back to various ancient periods of time. Don’t hesitate to wander around the streets of the Old Town, you will discover the magnificent beauty that awaits you.Our next and final destination is Falassarna Beach, which is located on the west coast of Crete. Falassarna beach has been awarded for being the best beach in Crete and one of the top 10 beaches in Europe. It has light pick coloured sand and crystal clear waters with long magical waves coming in from the Mediterranean. Here you will have 3 hrs free time to relax and enjoy the sun. After that we return to Rethymno, where you will be taken back to your hotel .
...  More
From
US$51.80
From
US$51.80
Learn More

Explore the world-famous Cave of Zeus and East Crete “must-see” landmarks, like a true VIP. Your private local insider guide will customize bespoke itineraries through the mountainous region of Lassithi by visiting authentic Cretan villages, connecting with locals, and deeply engaging with East Crete's unique nature, within comfortable chronological order and privacy. You will also have the opportunity to experience Cretan mountainous wine-tasting with traditional lunch in a picturesque place, as well as visit a ceramic workshop and the town of Agios Nikolaos.
...  More
From
US$684.71
per group
From
US$684.71
per group
Learn More

Day 1 Explore the hidden gems of the South-Western region by following bespoke itineraries off the beaten track. Your private local insider guide will unveil for you wild Cretan nature, beautiful gorges with breezy fresh-water springs, authentic Cretan villages, breath-taking spots with panoramic views of the Libyan Sea, and ancient Byzantine monasteries. You will enjoy an authentic lunch (tasty grilled lamb on the spit) in a cozy place that is surrounded by mountainous waterfalls & friendly locals! At the end of the day, you will follow a scenic city trail through Venetian Rethymno's streets by visiting the best places for wine tasting! Day 2 Experience the idyllic escape to Elafonisi beach, with white & pink sand joined together that everyone dreams about like a true VIP. Your day-trip will be enriched with bespoke itineraries off-the-beaten-track to explore & engage with the West Crete & its hidden gems. You will also get the best recommendations for an authentic Cretan lunch!
...  More
From
US$1,274.96
per group
From
US$1,274.96
per group
Learn More

4
Explore the quintessential luxuries of Crete island by experiencing an idyllic escape to the iconic Elafonisi pink sand beaches with crystal clear Libyan Sea waters. Enjoy a chauffeur-driven private tour with ultimate comfort and peace like a true VIP. You will have a personal pick-up and drop-off by your private local insider guide, with a premium vehicle at your full-day disposal. Your tailor-made daytrip will be enriched with bespoke itineraries off-the-beaten-track to explore and engage with the South-West Crete and its hidden gems. In addition, you will also receive the best recommendations for an authentic Cretan lunch!
...  More
From
US$578.46
per group
From
US$578.46
per group
Learn More

A plethora of majestic beaches in Greece can be found in difficult-to-access paradises. Balos lagoon (listed in the top 25 beaches of the world) - with its white soft sands, exotic azure waters, and the isolated rugged breathtaking landscape - is not an exception! Enjoy this full-day chauffeur-driven jeep tour, with a private local insider guide, ultimate comfort, and privacy. The exclusive conduction of this day-trip is that you will reach Balos from its hill-side, which means you do not have to stick with the schedule of ferries and tourist masses from Kissamos port.
...  More
From
US$649.29
per group
From
US$649.29
per group
Learn More