How to Spend 1 Day in Dallas 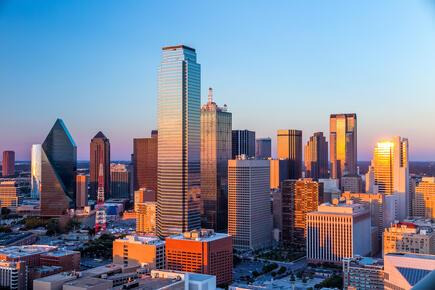 The Big D is a Texas icon, thanks to its football, eponymous television series, country music, and upscale ethos. There’s plenty to see and do in this Lone Star city, and even if you only have one day, you still have time for a uniquely Texas experience. Here’s how to make the most of your limited time in Dallas.

Take the morning to get your bearings with a sightseeing tour of Dallas. Learn about the city’s history as you cruise through downtown and the Arts District by Segway, or opt for a small-group coach tour to visit sites such as Pioneer Plaza, Dallas City Hall, and Dealey Plaza. If you’d rather explore at your own pace, pick up a multiattraction city pass to visit some of the most popular attractions—the Perot Museum, Reunion Tower GeO-Deck, Dallas Zoo, and the George W. Bush Presidential Library & Museum among them—at your leisure.

Afternoon: An Afternoon with JFK

In the afternoon, take a step back in time to learn more about one of the most historically significant events to ever take place in Dallas, the assassination of President John F. Kennedy. Sift through stories and conspiracy theories with a local guide as you visit the Grassy Knoll, Kennedy Memorial, and the former home of Lee Harvey Oswald. Don’t leave Dallas without a visit to the Sixth Floor Museum at Dealey Plaza and its collection chronicling the life and death of JFK.

Night: A Taste of Texas

Dallas is proud of its food scene, so loosen that belt and treat your tastebuds to the flavors of Texas this evening. Options abound. Head to a local barbecue joint for some slow-smoked brisket, sample the city’s best tacos and margaritas on a food tour, or explore the culinary scene of a particular neighborhood, such as Deep Ellum, West Village, or Uptown. After you’ve had your fill, finish your day with a night out on the town. Hop aboard a multipassenger party bike for a pub crawl.

6 Tours and Activities | All Dallas Tours

277
Somewhere at the intersection of presidential history and American mythology, the JFK assassination continues to fascinate Dallas visitors. See the site where the infamous shooting occurred on this special historical tour to Grassy Knoll and the Kennedy Memorial; separate the facts from the theories with the help of your guide, who will walk you through that day and its aftermath. This tour includes a guide, entrance fees, and round trip transportation.
…More
From
US$76.92
From
US$76.92
Face masks required for guides in public areas
Hand sanitizer available to travelers and staff
Transportation vehicles regularly sanitized
Learn More
Taking safety measures

39
Taste Dallas' best tacos and margaritas on this half-day coach tour. Learn about the history of these traditional Tex-Mex foods and beverages from your guide and sample some of the city's best tacos with stops at four local-approved eateries. Air-conditioned transport and all food and drink tastings are included.
…More
From
US$70.52
From
US$70.52

66
See the sights of Dallas on this small-group tour. Traveling with a guide who provides insider knowledge as you go, you'll check out attractions such as Pioneer Plaza, Dallas City Hall (designed by I.M. Pei), the Dallas Arts District, and Dealey Plaza, where JKF was shot. Plus, choose a morning or afternoon departure time to easily fit this tour into your schedule.
…More
From
US$58.45
From
US$58.45
Face masks required for guides in public areas
Hand sanitizer available to travelers and staff
Transportation vehicles regularly sanitized
Learn More
Taking safety measures

69
Hop aboard the Party Bike for a pub crawl with a difference in Dallas. Pedal your way around Deep Ellum, stopping at three bars or pubs, where you can make the most of VIP drinks specials. BYO drinks are also welcome and the on-board sound system will keep you in the party mood as you cruise around town.
…More
From
US$55.00
From
US$55.00

14
Explore Deep Ellum on a food walking tour that introduces you to the culinary delights of this popular Dallas neighborhood. With a guide, you'll visit local restaurants and artisan food shops for enough tastings to make up a meal, plus check out Deep Ellum's street murals as you hear about the art and music roots of the district. An optional happy hour stop is also available (drinks at your own expense).
…More
From
US$85.52
From
US$85.52