Top Temples and Pagodas in Hangzhou 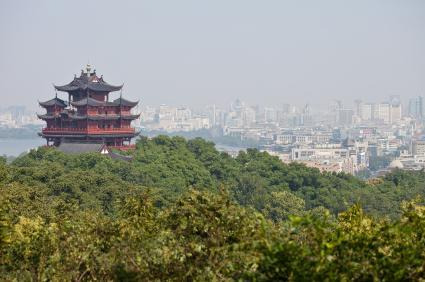 Despite being a massive, modern city of over six million people, Hangzhou still features a large number of ancient-style temples and pagodas where visitors feel as if they’re stepping back into the China of old. Here are a few not to be missed.

This fourth-century temple, also known as the Temple of Soul’s Retreat, ranks among the most important Chinese Zen Buddhist shrines. Lingyin is perhaps best known for the 300 statues that monks and other artists carved over the centuries from the rocks and grottoes of the neighboring Peak Flown from Afar.

Situated southwest of the UNESCO World Heritage–listed West Lake (Xihu), Six Harmonies Pagoda (aka Liuhe Pagoda) is an octagonal structure first constructed in the 10th century. It once served as a lighthouse for vessels on the Qiantang River. Today a narrow staircase leads to a viewing area affording excellent views of the surrounding area.

Some of the best views over West Lake are from the top of the golden-spired Leifeng Pagoda. Originally built in the 10th century, the five-story, eight-sided pagoda has been modernized with conveniences like an elevator to the top of the tower.

While not as well known as Lingyin, this 10th-century Zen Buddhist temple has been fully restored to its original splendor, complete with a forged copper bell and carvings of the 68,000 characters of the Lotus Sutra on its facade. A massive seated statue of Buddha sits within the Great Treasure Hall.

6 Tours and Activities | All Hangzhou Tours

98
Set out on a scenic drive around Hangzhou’s UNESCO-listed landscapes on this private full-day sightseeing tour and enjoy a fully-customizable itinerary. Cruise around the mist-shrouded West Lake, one of China’s most memorable natural wonders, and stroll around the Flower Harbor Park. Visit the famous Lingyin Temple, sample traditional tea at the Meijiawu Tea Village and stop for lunch in a local family home (own expense).
…More
From
US$153.38
Price varies by group size
From
US$153.38
Price varies by group size

113
Discover the rich cultural tapestry of Hangzhou, a city shrouded in history and natural splendor, on a full-day tour from Shanghai. Accompanied by an accomplished guide, gain fascinating insight into China’s most esteemed tea at Meijiawu Tea Village; cruise on the idyllic and inspirational West Lake; and marvel at the alluring architecture of the Six Harmonies Pagoda. Explore the historical highlights and cultural delights of the UNESCO World Heritage-listed city on this all-inclusive tour, during which lunch, round-trip transportation and entrance fees are complimentary.
…More
From
US$169.00
From
US$169.00
Face masks required for travelers in public areas
Face masks required for guides in public areas
Face masks provided for travelers
Learn More
Taking safety measures

Soak up the charms of lakeside Hangzhou with this private 4-hour tour and enjoy the flexibility of a fully customizable itinerary. With your English-speaking guide and private driver, you can see the sights at your own pace and spend as much time as you want admiring the views of Feilai Mountain and West Lake. Take in attractions like the Lingyin Temple and Leifeng Pagoda; stroll around the shops of Qinghefang Street; and visit the China National Silk Museum, or ask your guide for a personalized recommendation.
…More
From
US$112.99
Price varies by group size
From
US$112.99
Price varies by group size

11
Enjoy a full-day tour with an experienced guide to explore the highlights of Hangzhou. Visit Lingyin Temple, one of the most renowned Buddhist temples in China, and see intricate Buddhist carvings in numerous grottoes. Then head to Dragon Well Tea Plantation where you drink tea in a shaded pavilion with spectacular views. Finally, take a scenic cruise on West Lake, a UNESCO World Heritage site, then stop at Red Carp Pond. Enjoy great photo ops on a tour that includes transportation by climate-controlled coach with hotel pickup and drop-off, and lunch included.
…More
From
US$61.99
From
US$61.99

2
Journey through the dreamy landscapes of Hangzhou on this full-day sightseeing tour, including hotel pick-up and drop-off. Visit the Hu Xueyan House, discover the history of the Silk Road at the China National Silk Museum and look out over the famous West Lake from the Leifeng Pagoda. Peek into the fascinating Museum of Traditional Chinese Medicine and stroll down Qinghefang Street, renowned for its historic buildings and lively shops.
…More
From
US$79.48
From
US$79.48

2
Discover the city Marco Polo famously called ‘paradise’ on this private full-day tour of Hangzhou, including hotel pick-up. Capture photos of the glittering West Lake; admire the unique rock formations of Feilai Mountain; and see landmarks like Lingyin Temple, Leifeng Pagoda and Six Harmonies Pagoda. After lunch (own expense), discover the history of China’s silk trade at the fascinating National Silk Museum, then stroll down the lively shopping street of Qinghefang.
…More
From
US$172.71
Price varies by group size
From
US$172.71
Price varies by group size